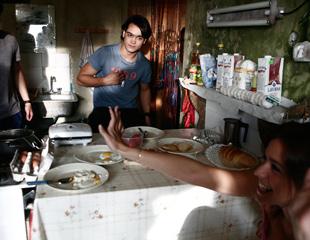 The filmmaker who gave us The Way I Spent The End of The World, back in 2005, has finished working to his second feature – Loverboy, based on a screenplay previously entitled “A Heart-Shaped Balloon.”

Mitulescu’s film tells the story of Luca, a 20 year-old young guy who lives in Hârşova, a small town near the Danube. Luca seduces girls, makes them fall in love with him and passes them on to a human trafficking network in Constanţa. The policemen call this technique the “falling in love” method and the ones doing it are named “loverboys”. Luca’s life changes when he falls in love with a girl named Veli. He’s willing to give up everything he did before to be with her.

The film stars George Piştereanu and Ada Condeescu, while the shooting took place in Contanţa and its surroundings, although for the last two days of shooting the entire team moved to Bucharest. The cast also includes Clara Vodă, Bogdan Dumitrache, Remus Mărgineanu, Ion Besoiu, Coca Bloss and several other non-professional actors.

Loverboy is a Romanian – Swedish – French – Serbian co-production, the screenplay is written by Cătălin Mitulescu and Bianca Oana, while the director of photography is Marius Panduru, the one who also worked for The Way I Spent The End of The World and If I Want to Wistle I Wistle.

The film received more than 500.000$ from the National Center of Cinematography and it will be launched in cinemas next year. Since this was one of Cannes Film Festival’s Atelier de la Cinefondation projects of 2007, there are better than average chances that we might find this at the fest next May.