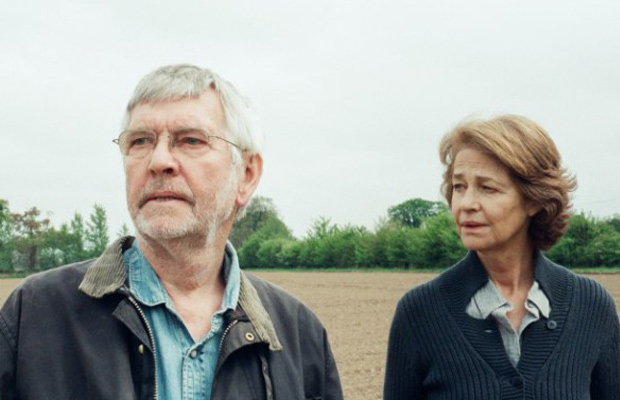 The One You’re With: Haigh’s Superb Examination of Marriage and Things Left Unsaid 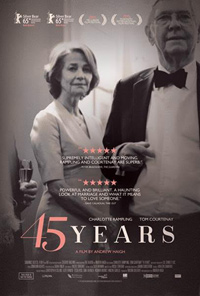 With imperceptible grace, 45 Years portrays the warping of a near half century marriage by a matter of degrees measured almost exclusively by acute attention to body language and facial expression. As Andrew Haigh’s third feature, the director proves to be quite astute at depictions of nuanced interactions in relationships. Without so much as a single screaming match, the filmmaker conveys the unique experiences and attitudes of a long term relationship, and provides a cinematic counterpart to something like Edward Albee’s famed disintegration into bitterness, bitchery, and alcoholism with Who’s Afraid of Virginia Woolf? But at its center is the divine Charlotte Rampling as a woman who peels back the thick layer of superficiality that’s enveloped her relationship with someone she doesn’t know very well at all.

On the eve of their 45th wedding anniversary, for which they have a grand celebration scheduled, Kate (Rampling) and Geoff Mercer (Tom Courteney) receive a letter from Switzerland, where the body of Tom’s ex-lover Katia has been found preserved perfectly in the ice. The letter immediately awakens memories for Geoff, and it’s clear he had quite passionate feelings for this woman, whom he knew several years before Kate. As the week leading to their wedding anniversary dwindles away, Kate becomes more and more distraught at Geoff’s increasingly cold and distant behavior, and she begins to realize difficult truths about their marriage.

Rampling has long been a cinematic staple, favored by a variety of European auteurs since breaking out in the late 1960s. Recently the muse of several Francois Ozon titles and appearing in a variety of notable works from major internationally renowned talents, the British actress is too often overlooked for accolades. Hopefully, beyond Berlin, her performance in 45 Years will change that (she’s won a Cesar but is still without Oscar glory, more a lack on that particular organization’s slate than hers). Here she gives an elegant, melancholy portrait of devastating realizations and believable emotional depths often depicted in exaggerated platitudes in many English speaking films.

Often, DoP Lol Crawley (Ballast; The Childhood of a Leader) focuses tightly on her, capturing her movements, expressions, reactions and eventual distractions. Courteney is equally nuanced, but our perspective of him is colored by his wife’s emotions, and thus it often feels like we’re getting a less clearly defined composite.

Based on a short story by David Constantine, 45 Years recalls a variety of literary cousins, from Kate Chopin’s short story “The Story of an Hour” to Joseph Conrad’s novella The Letter (filmed in 2005 as Gabrielle by Patrice Chereau), tales about an item or an instant immediately changing the behavior of its spouses and playing with audience assumptions. The ‘act’ of marriage is just as much for the benefit of others as those directly involved, here shown by Kate’s insistence that the members of the anniversary party have no idea about their recent distress.

As the supporting friend played by great character actress Geraldine James points out, these parties are for the unhappy wives, to provide a public venue for the confessional tears of the increasingly distant husband, an unsaid reiteration of vows and promises long forgotten in the daily grind of life (strangely, the notion of these celebrations and their reification of falsehoods feels like something from Ira Levin’s The Stepford Wives under this lens). Select songs from the familiar soundtrack are used inventively, these being classic pop tracks from their youth, sporting lyrics as clueless as poems and songs on the subject today. There’s nowhere you’ll find a more saddening use of The Turtles’ “Happy Together” or The Platters “Smoke Gets in Your Eyes,” than what Haigh achieves here.

In many ways, 45 Years is a compelling companion piece to Haigh’s beautiful 2011 film, Weekend, also using time as a signifier to determine behaviors and emotions. Whereas that depicted the beginning of romance for a gay couple, Haigh’s representation of a (presumably) monogamous heterosexual union is equally adept, earning rightful comparisons to the tortured marriages depicted throughout the cinema of Ingmar Bergman.