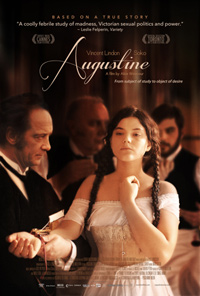 Celebrated filmmaker Alice Winocour, renowned for several of her short films, makes a compelling debut with Augustine, based on the real life case study of a highly publicized teenage patient of a 19th century French neurologist. Subtle and sharply observed, unlike the shrill and spurious 2011 David Cronenberg A Dangerous Method, which shares similar unprofessional patient and doctor themes, Winocour creates an entrancing, impressionistic portrayal of historical sexism and exploitation.

In 1885 Paris, Augustine (Soko), an illiterate housemaid, suffers from a series of seizures, which usually results in partial paralysis of various body parts. After one such violent and very public display, Augustine awakens to find one of her eyes shut tight, and so her cousin, who works in the same household, shuttles her off to the Hospital of Pitie Salpetre and there she is placed under observation by the famed Professor Charcot (Vincent Lindon).

Once doctor is introduced to patient, he understands her to be a glorious specimen of ovarian hysteria, a patient whose condition can be displayed to secure further funding for his hospital. But as his fascination with Augustine grows, so do her feelings for him, and an emotional relationship blooms, which is all too easily detected by the Professor’s sidelined wife, Constance (Chiara Mastroianni). But while it’s Augustine’s illness that keeps her entrenched in the doctor’s presence, she also has a strong desire to be cured of her ailments.

From the arresting first shot of Augustine gazing into a roiling pot of water as a crab slowly boils to death, to be frivolously consumed by the elitist upper class, Winocour gives a carefully calibrated portrait of privilege, repression, and unnerving emotions that corrode human function. In her first lead role, singer Soko is an arresting, brooding presence at the center of the film, her attraction to the slightly grizzled Lindon subtle and believable. Their shared sequences are the driving force of the film, though Chiara Mastroianni and a monkey named Zibidanie provide textured window dressing.

While a little research may certainly reveal some of the historical liberties Winocour has taken with the material, Augustine still makes for one accomplished debut, depicting a period in medicine that folds in on its own melodramatic excess or is simply treated satirically in similarly themed films. Even in present day, depictions of desire and sexuality are continually hampered by conservative ideals about what life should look like rather than what it is really like.

Winocour includes moments of critique from Charcot’s peers at the time, getting some laughs out of a newspaper article written by Maupassant. At a dinner party, a cajoler sneers about hysterical women, “Why does it always revolve around sex?” Clearly, this was before Freud (and yes, he studied under and was heavily influenced by Charcot), who ascertained that everything revolved around it (though, keep in mind, he also stated “the sexual life of adult women is a dark continent for psychology”). Thankfully, Winocour simply portrays her characters as humans stuck in a time and place where they weren’t allowed to engage in or enjoy the natural drives and desires of human nature.

Reviewed on April 20 at the 2013 COLCOA Film Festival.