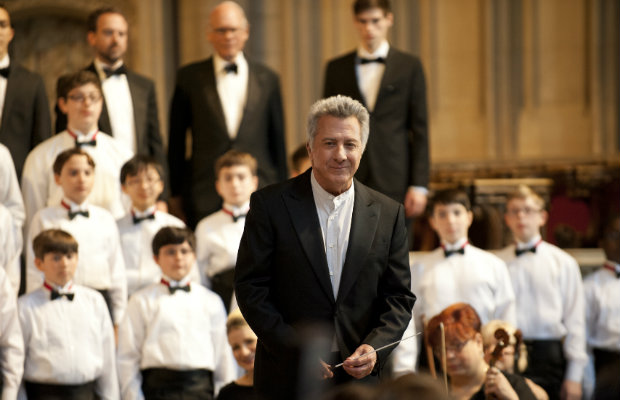 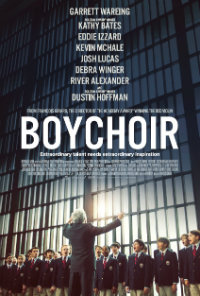 Quebecois filmmaker Francois Girard returns from a near decade long hiatus with Boychoir, his first cinematic venture since 2007’s Silk. The absence may not be much for Girard, who never seems to be in a much of a hurry when it comes to filmed endeavors, considering he last received breakout notices in that realm for 1998’s The Red Violin. Returning once more to his favored subject matter, the connective tissue of music, his latest feels a bit too familiar, a commonplace underdog tale that never quite feels invested in itself. True, Girard bypasses the general sense of staunch melodrama that saddles these diamond in the rough tales where troubled yet talented youth meets grizzled mentor (Finding Forrester, for instance), but there’s an air of nonchalant convenience to its rudimentary structure that tends to undermine some potential powerful elements, such as an interesting performance from Dustin Hoffman.

When 11 year old Stet’s (Garrett Wareing) mother unexpectedly dies, his estranged father (Josh Lucas) wishes to place him in foster care. But the intervention of a helpful teacher (Debra Winger) lands the musically talented Stet an interview with Master Carvelle (Dustin Hoffman), a demanding choir master at a prestigious school. As Stet is forced to overcome his own surly attitude as he deals with an equally irritable new instructor, it’s discovered that he just may be the shining talent the school needs to carry their reputation to the next level.

More surprising than seeing Girard’s name atop the overly generic Boychoir is screenwriter Ben Ripley, who graduated from penning a couple of Species sequels to Duncan Jones’ 2011 film Source Code. Perhaps his step away from sci-fi explains his incredibly dry approach to this school boy drama that gets outshined significantly by the vocal performances.

Hoffman is quite reserved here, and he’s mostly relegated to the sidelines as a cantankerous bore. A select couple of sequences hint at the tired depths of a man searching to foster a talent he’d long ago been told he never himself had, the years only widening the gap between himself and his protégés. Unfortunately, a rather artificial performance from his young co-star Garett Wareing, is never up to par with Hoffman. First seen scream-singing at his music teacher before promptly punching out a student in the hallway that demeans the boy’s deadbeat mother (who dies in a car crash in the very next scene), it’s a screeching, cloying and sometimes cringeworthy turn. Wareing’s given a handful of dramatic scenes, but his mussy hair and baggy clothes are the only fitting characteristic from a performance that otherwise feels heavy-handed.

Other adults are stock characters portrayed by high pedigree actors, such as Debra Winger’s ultra-sympathetic teacher, Kathy Bates as the head of the prestigious music school, Eddie Izzard as a malignant underling, and Josh Lucas as the monstrously uncaring father keeping his talented son a secret from his second wife.

Lovers of the familiar may feel more pleased by Girard’s predictable exploration, but one can’t help but feel there’s more compelling material lodged in this realm, especially considering the incredibly fleeting nature of these talents (which historically resulted in castration for boys like these in other climes—the eternal eunuchs). What happens to these boys after their choir service completes its run? Stet’s narrative ends on an uncharacteristically hopeful note, his detrimental familial issues resolved in the nick of time. One could tune in and out of Boychoir and safely ascertain what’s transpired from one scene to the next.