Lars and the Killer Dude: Rodriguez Explores Art and Inspiration 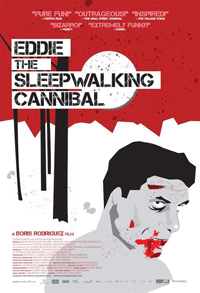 While sporting a title that would seem to indicate a comedic mash up of bizarro horror tropes and cheeky zingers, Boris Rodriguez’ enjoyable debut, Eddie: The Sleepwalking Zombie (of which the addendum may very well be a tacked on marketing ploy as the title credits indicate) manages to make significant use out of its examination of inspiration and the path of successful artistry. While the film never quite manages to go deeper than a superficial tongue-in-cheek trifling, there are enough oddly fascinating elements to sustain interest from the Danish/Canadian co-production, mostly due to a surprisingly understated performance from Thure Lindhardt.

A once successful painter, Lars Olafson (Lindhardt), has been unable to produce any significant works of art for the past decade. At the suggestion of his art dealer, Ronny (Stephen McHattie), Lars takes a job as a teacher at an arts school somewhere in the Canadian hinterlands in order to stir his creative juices. While the quiet voiced Dane doesn’t make a very good impression with a local police officer (Paul Braunstein), he’s the talk of the town, and the school principal is hopeful he will paint something while a school employee.

Lars is immediately attracted to a beautiful co-worker, Lesley (Georgina Reilly). In order to make a good impression, he offers to house Eddie (Dylan Smith), a hulking mute whose aunt is the school’s only benefactor and has recently died. If the school doesn’t take care of Eddie in the event of her death, they lose her necessary contributions. This is all fine and dandy but Lars quickly discovers that Eddie has a strange problem when he’s upset by traumatic life changes—he strips off his clothes and sleepwalks in the wintery woods at night, ravenously eating any living thing in his path. Curiously, witnessing the carnage kicks Lars’ creative juices into hyperdrive, and he’s soon manipulating Eddie to make more and more nighttime excursions. However, Eddie’s problem dissipates when he starts to consider Lars a friend, which has Eddie considering how far he’s willing to go to pursue his artistic endeavors.

At its most obvious and playful, Eddie is all about the misconception that truly great art can only be accomplished through acute suffering and pain. In the film’s opening sequence, Lars accidentally maims a deer with his vehicle and is thus compelled to bash the wounded creature’s skull in with a large rock. While this conveniently sets the stage for Lars and his morbid creative inspiration born out of death and violence (moments before a radio program quotes Jack London, “You can’t wait for inspiration. You have to go after it with a club”), the whole film, at large, is about art and entertainment at the exploitation of others.

The film may be titled after the somnambulant Eddie, but the film is really about Lars, a somewhat unlikeable and unsympathetic loser who has no qualms about manipulating Eddie (not to mention, killing others). At the expense of such obviousness, there’s never a chance for us to develop much emotion for any of the characters, even though there are glimpses of the possibility of some in some moments meant to show the strangely endearing friendship between Lars and Eddie. However, the film never quite reaches the entertaining heights of similar fare like Fido (2006) or Tucker and Dale Vs. Evil (2010).

For what it’s worth, Thure Lindhardt makes for a fascinating presence at the center of Eddie: The Sleepwalking Cannibal. He’s quite serious and surprisingly droll in a role that easily could have become a portrait of a mad artist. Stephen McHattie, as usual, livens up scenes that could otherwise seem potentially stagnant while Georgina Reilly is unfortunately saddled with the customary female catalyst syndrome. As Lars drives around the wintery roads, he tunes into an opera radio station, where a host continually provides the often brutally violent synopses of what each opera is about, then praises the work, asking the audience, “Isn’t that beautiful?” Your answer should dictate whether or not you like Eddie.