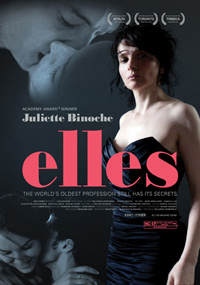 There are several subjects that have been globally exhausted in cinema. It’s a wonder when fresh angles and avenues are created to explore Nazis, coming of age tales, the mid-life crises, etc. Prostitution is another one of those subjects, and Polish filmmaker Malgoraza Szumowska nabs Juliette Binoche to spearhead her own expose on the subject with Elles. Unfortunately Szumowska falls into a contrived trap of exploitative mediocrity with her latest effort attempting to explore the underpinnings of the world’s oldest profession.

Juliette Binoche stars as Anne, a Parisian socialite, successfully married mother of two, and an investigative journalist for Elle magazine. Her latest assignment is a piece on student prostitution, and we learn that she has become somewhat close to two of her subjects. There’s Alicja (Joanna Kulig), an immigrant from Poland who works as a prostitute to finance her nice, Parisian apartment while she studies, and Charlotte (Anais Demoustier), another student who supplements her income with her nighttime profession. Alicja was immediately introduced to the life upon entering the country as a lucrative way to survive, and Charlotte compares prostitution to the bad habit of smoking, as in she’s now used to the money and could never go back to fast food service.

We are treated to flashbacks of Anne’s interviews with these women as she prepares dinner one taxing day in preparation to receive her husband’s boss and his wife that evening. Amidst high stress phone calls from her editor, difficulty disciplining her two sons, the discovery of porn on her husband’s computer, her own grappling with a sort of sexual awakening and the flashbacks of her interviews, Anne is right on course for a mini meltdown before dessert, which is just what happens. And inbetwixt all of that, we’re treated to sexually explicit reenactments of the two young women with several of their johns.

Elles (which translates as “they”) has been saddled with an NC-17 in the US due to the graphic sex scenes, though really, there’s not too much to sqwack about. Szumowska films most of the sex reenactments from a distance or from doorways of other rooms, to remove us from the action in nearly every instance. And while the sex the women are engaging in always seems slightly degrading (like watching Alicja lap up urine before her john serenades her on his guitar—what a sweetie) two startling scenes involving Charlotte get right in your face, one involving intimate sex with a boy she likes and another where a john gets violent with a wine bottle. But in the history of prostitution in cinema, these moments hardly register as effective.

The only reason to see Elles is for Binoche, who seems a little too good for the material (though she can’t elevate it). While it’s believable that her character would behave as she does after having the epiphany that people from her world and their ambivalence may be part of the problem, it’s a bit of a snoozer. While it’s trying to be a complex study of female sexuality (what with Binoche eerily fondling the innards of some shellfish as she prepares dinner, a minor detail that would have been more at home in a better film) it ends up being more foreboding in what it’s saying about male sexuality. “They can’t do it with their wives,” says Alicja. And, as Anne finds out, she’s right, rejected by her own husband, Louis-Do de Lencquesaing, every bit as smarmy here as he is in this year’s Polisse. Since sex is treated as something degrading, they seek to debase women they don’t have to respect, etc, etc. For a complex study on female sexuality that’s both terrifying and has something to say, check out The Piano Teacher (2001). For lots of extreme close-ups of the beautiful Binoche, watch Elles.