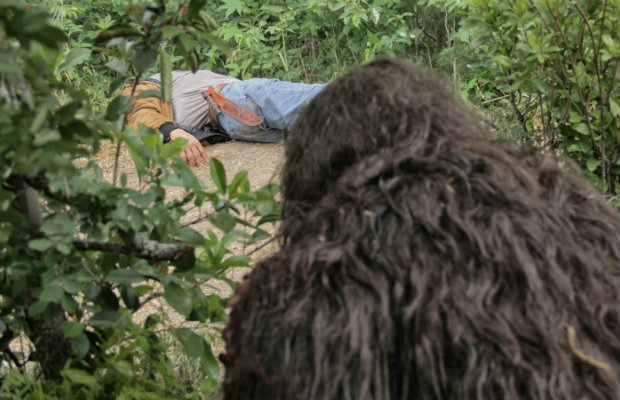 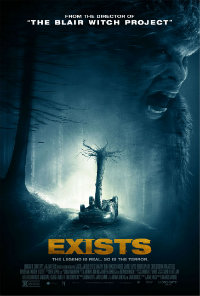 The co-director of 1999’s The Blair Witch Project, Eduardo Sanchez, returns to the fold of the found footage genre with Exists, replacing witches with Bigfoot, and a gaggle of clichéd ignoramuses that fail to stand out as anything other than slightly typified personalities. The fact that Sanchez’s film plays like one more forgettable entry in a cost effective indie genre is of significant note considering it was his original success that spawned a whole generation of mimicry, which he’s now become a part of himself. With nary an original flourish in its little brain, despite some fleeting moments of genuine creepiness, the distraction of its mechanics work as resolutely against its effectiveness like a majority of all films in this vein, wherein cameras stay indefatigably in action no matter the dangers faced, and obvious editing and musical cues interfere with the rules of the game.

Five friends in Texas head out into the woods to have a weekend party getaway. Brothers Matt (Samuel Davis) and Brian (Chris Osborn) decide to check out their uncle’s forlorn cabin, a place that they were banned from ever visiting when they were kids, for reasons seemingly unknown to them. While Brian films the other travelers, including Todd (Roger Edwards), his girlfriend Elizabeth (Denise Williamson), and Dora (Dora Madison Burge), generally to all of their annoyance, they hit some kind of animal in the dark on the way to the cabin, but don’t see anything on the road. In a secret confession to the camera, Brian reveals that the reason his uncle wouldn’t allow them to come to the cabin was due to the fact that Bigfoot stalked the woods surrounding it. Lo and behold, the creature makes a scheduled appearance and begins dispatching the clueless crew one by one. With the survivors fleeing into the woods and Brian’s uncle on his way to help them (with spotty cell phone reception, it’s the only call that goes through), it becomes a fight for survival.

The ingeniousness of something like The Blair Witch Project was that we could logically believe that at least one member of the troupe of documentarian filmmakers might actually believe they need to keep the camera on even in the face of possible peril. With Exists, this almost never really makes sense, especially when it’s revealed that the cameraman lied to his friends about the possible dangers that may lay in wait for them.

Alternating between the perspectives of different cameras, Sanchez displays all the obnoxious trappings that this subgenre now adheres to, throwing all semblance of logic out the window for the promise of fleeting scares via cost efficiency. Curiously, filmmaker Bobcat Goldthwaite beat Sanchez to the punch with found footage Bigfoot film Willow Creek (2013), though creature effects were pretty damn slim.

Sanchez’s cast registers as generally annoying, with female characters reduced to uncontrolled bouts of hysteria at every possible turn. To be fair, none of the male counterparts seem to come equipped with a self-preservation instinct, making the human component displayed in Exists seem wearily worthy of inevitable extinction.