Wild in the Streets: Nordahl’s Debut Spins on Devotional Dysfunction 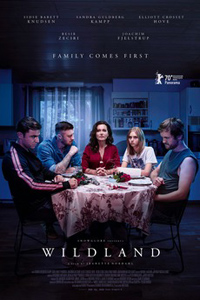 The family crest for the sinister brood at the heart of Jeanette Nordahl’s directorial debut Wildland would likely read something like “Familia Super Omnia (Family Above All)” based on their supposed allegiance to their shared aims. In the same breath, good luck to any one of their kin who dare to defy the easily dismayed matriarch ensuring their (mostly) efficient criminal operations girding their livelihood. Featuring a winning performance from Sidse Babett Knudsen, oscillating wonderfully from nurturing mother figure to icy racketeer, this Danish familial crime saga follows familiar rhythms wherein a new initiate to the tight-knight clan catalyzes a swift unraveling of operations.

On the precipice of turning eighteen, tragedy strikes in the life of Ida (Sandra Guldberg Kampp) when her mother is killed in an auto accident. Suddenly, she’s forced to depend on the kindness of relatives who are veritable strangers when she’s placed in the care of her aunt Bodil (Knudsen), a woman she doesn’t recall ever meeting. Without having the chance to examine what may have caused the rift between the sisters, Ida is whisked off to live with Bodil and her three sons. Immediately, there’s something a bit off in the dynamic between mother and her offspring. Mads (Besir Zeciri) greets his estranged cousin and is gently chastised by mom, “You’re too baked, sweetheart.” Jonas (Joachim Fjelstrup) seems aloof while David (Elliott Crosset Hove) has come under fire for trying to extricate himself from the clan with the barrier of his girlfriend, a woman Bodil does not approve of. As their reunion begins on an even keel, it becomes apparent Bodil and Sons operate a criminal business wherein they fleece, and often violently, ‘clients’ out of money, among other activities. When Ida becomes witness to a crime, she becomes a compromised member of the family.

Nordahl’s debut seems destined to be compared, perhaps unfavorably, to David Michod’s 2010 debut Animal Kingdom, which features a wholly familiar scenario. On the plus side, lead protagonist Sandra Guldberg Kampp is more emotive than her counterpart in the Michod film, James Frecheville. As enjoyable as Knudsen is, a continually underrated and extremely versatile performer (who’s headlined titles for Peter Strickland, Ole Bornedal and Tom Tykwer), her Bodil seems unlikely to score the critical acclaim of Animal Kingdom’s Jacki Weaver, who scored an Oscar nod as an insidious, manipulative matriarch—but then Knudsen and the narrative aren’t given too large of a scope as Nordahl places the heavy lifting on Kampp’s nubile shoulders, who is, unfortunately, the least dynamic and most underwhelming character.

The mystery of what finally dissolved the relationship between Bodil and Ida’s mother nags the periphery, as if we’re being denied something deliciously pulpy (a la Flowers in the Attic). Snippets of Bodil’s compromised relationship with David, played by Elliott Crosset Hove (who snagged Best Actor in Locarno for 2017’s Winter Brothers) speak to a more dysfunctional saga than the limited parameters of perspective allow the narrative to delve into—and to its credit, there’s a desire in Wildland to see more from this compelling coterie of criminals.