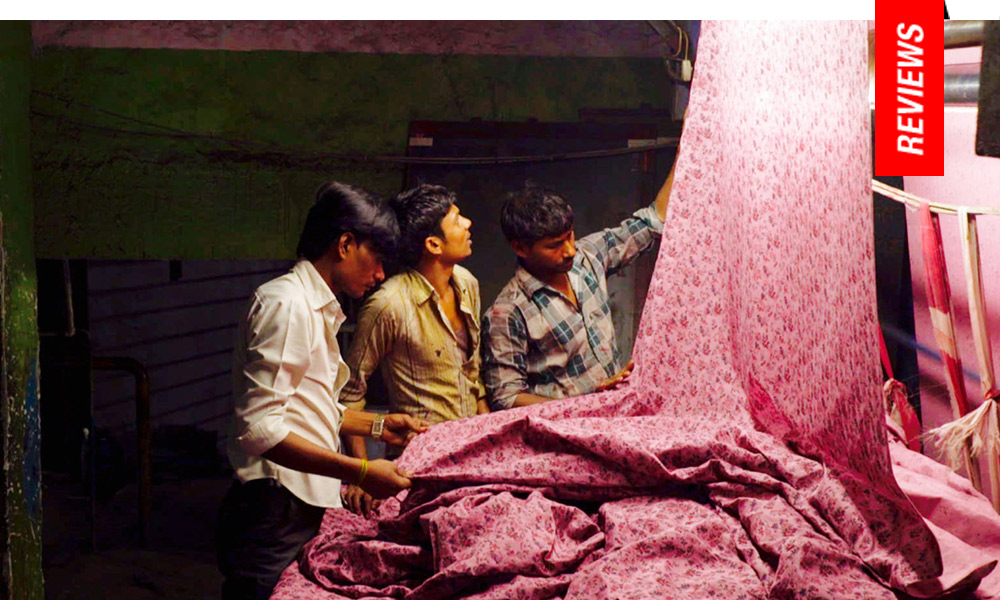 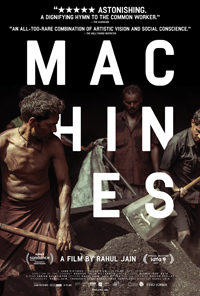 Navigating the sea of weathered faced laborers pulling in twelve-hour work shifts, Rahul Jain embraces the cinéma vérité aesthetic to relay a real time humanitarian crisis in the factories of India. Conditions are made far more haunting due to the filmmakers’ attention to detail, unique eye for moments often overlooked, and daring use of the factory’s abundant clanging metal and belching steam as a disturbing score. Machines excels in almost every facet as an engrossing film, a contemplative journey, and a serious investigative look without ever feeling overbearing, politicized or gimmickly humanitarian.

Snaking tracking shots that echo the complexity and fluidity of choice sequences found in I Am Cuba (1964) and Russian Ark (2002), Jain slides through corridors and workrooms of the unnervingly mammoth textile factory in Gujarat, India. While at first structured around the complexity of various jobs in the factory and how different people handle different stages of the process; the camera then directs its discovery toward the dehumanizing labor and intense hardship of the workers.

Though the docu only focuses on one factory, it represents the abject poverty of millions of labourers via its strong use of diegetic sound, startling cinematography, and selective interviews braided throughout this sleepless world of machines and fabric. The profound camera eye is so tactile that the humidity and heat of the factory drips from every shot; the slimy residue from textile paint oozes between frames, and dust chokes the light and air like ash pounces just like some of the more dystopian like imagery found in Michael Glawogger’s Workingman’s Death (2005). All of this provides an empathetic bridge to the subjects to facilitate an understanding to the extreme severity of their plights trying to fend for themselves and their families.

Opting for a narration-free approach, this will remind docu-lovers of the industrial Baraka (1992) or alienating workplace found in Jennifer Baichwal’s Manufactured Landscapes (2006). Though the movie’s stance on the conditions is not disguised, it allows multiple paths to be taken due to its presentation.

Jain has gathered thoroughly impressive production staffers and supporters who worked to see this film reach the world. Every moment during its bustling one-hour-ten-minute runtime is purposefully sluggish, thickly blanketed in emotional resonance and pensive contemplation. Though this can act as a call to action in adjusting this crisis, the doc does not abjectly say as much. The workers and managers speak for themselves, and what is said is startling and profound. When Machines reaches its conclusion, it reverberates with a resounding bleakness that encapsulates the whole of its experience by an interviewee saying, “my only satisfaction is that everybody dies.”