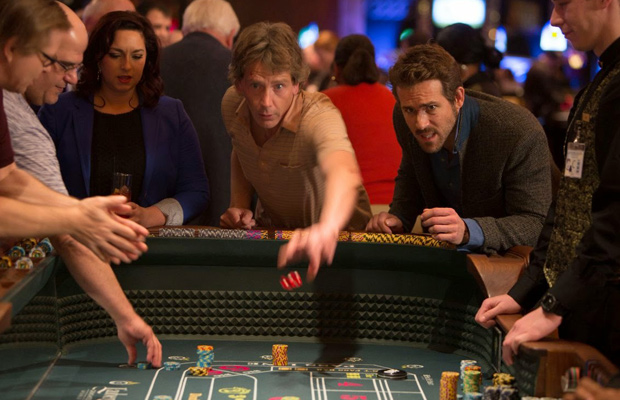 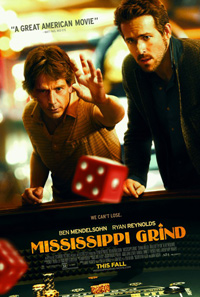 Filmmaking duo Anna Boden and Ryan Fleck return with their best collaboration since the 2006 break out title Half Nelson (a film which Boden only shared co-writing credit). Considering their last effort was the 2010 dramedy It’s Kind of a Funny Story, it’s with definite pleasure to see them return to their talents for concocting acute characterizations and capturing impressive performances with Mississippi Grind, a rambling, gambling tumbleweed of a film. Gilded with a palpable sadness in its exploration of hollow lives desperately chasing impossible dreams, the film pays homage to Robert Altman’s 1974 classic California Split, which starred Elliott Gould and George Segal. Boden and Fleck transport us to the modern day Mid-West, utilizing the eponymous river as journey through the threadbare humanity on the road.

Down on his luck Gerry (Ben Mendelsohn) seems determined to live on the precipice of complete ruination, unable to get his life in order as he squanders whatever hopes of normalcy by gambling his income as a real estate broker away. Perpetually lonely and apparently hopelessly in debt, as evidenced by a menacing lunch time date with a sweet faced loan shark (Alfre Woodard), he runs into a charming younger man at a card game, the loquacious Curtis (Ryan Reynolds). Gerry spends his off time in his car listening to tapes informing him of physical cues people make unintentionally revealing their hands. But Gerry can’t quite read Curtis, other than that they share a certain loneliness beneath the superficial veneer. After an enjoyable night on the town, Curtis claims he’s on to bigger and better things, only to return a day later, simultaneously rescuing Gerry from his impending doom since he can’t pay back the money he owes. The two decide to take off on the road, hitting up games and joints as they journey towards a near mythical card game in New Orleans, where fortune and glory might await them.

If you’re familiar with the Altman film and it’s rather ambiguous trajectory, then you’ll come prepared for the style and tone of Mississippi Grind, which truly prizes Curtis mantra, “The journey’s the destination,” meaning tone and character trump the narrative flavor.

Boden and Fleck are equally indebted to any number of 1970s films from long gone maverick auteurs, where vibrant, flavorful cinema once ruled the American cinematic landscape, explaining the presence of James Toback (he penned the screenplay for Karel Reisz’s 1974 The Gambler, remade in 2014) in one memorable sequence. It’s great to finally catch Ryan Reynolds in something worthwhile, after spending the last several years in ill-fitting studio fare or miscast in problematic auteur misfires (The Voices; The Captive). He’s a sad faced charlatan here, a man in love with a woman but unable to accept the nature of her occupation, constantly hustling for the big win, or the big moment when everything falls right into place. But the film belongs to an exquisite Mendelsohn whose moving portrayal as Gerry manages to transcend the material this is all inspired by. Interactions with working girl Analeigh Tipton can’t hold a flame to the painful reunion with an ex-wife played beautifully by Robin Weigert, or a friendly-faced loan shark featuring Alfre Woodard, superbly cast against type

Another unmemorable turn from Sienna Miller (following equally mousy posturing in Foxcatcher and American Sniper) as one of the two escorts they spend time with in St. Louis is one of the film’s only dry spells in characterization, especially compared to Reynolds’ only other prolonged interaction, with 70s country singer Marshall Chapman as his mother. With her gruff voice and resilient persona, she’s an arresting screen presence, performing a sorrowful track in a film already littered with downbeat, meaningful tunes.

Returning DoP Andrij Parekh (who lensed the duo’s last three features) captures a deflated, sterile landscape of cramped interiors, tending to focus on characters either in full form or close-up in order to emphasize the film’s recurring motif of body language.