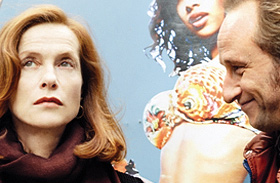 Anne Fontaineâ€™s latest confection, My Worst Nightmare, is a delightful vehicle for the awesome talent of Isabelle Huppert. Fontaine, while not the strongest director/writer, has scored her best feature since the subtle and chic Nathalieâ€¦ (2003). Known for her infamously icy demeanor, Huppert has been no stranger to comedy as of late, playing a bobble-head mother in Copacabana, (2010) and a similar role in Me and My Sister, (2004). However, Fontaine gives her a role (which she has stated she wrote with Huppert in mind) where she can transcend the type A bitch personality and be somewhat of a romantic foil as well.

Huppert plays Agathe, a notoriously bitchy art gallery owner (her favorite demand, acidly uttered, â€œBe preciseâ€) married to a publisher, Francois (Dussollier). At a school parent/teacher meeting, Agathe runs up against Patrick (Poelvoorde), a slovenly, uncouth blue-collar type who rubs Agathe the wrong way immediately. Come to find, Patrickâ€™s son is the new best friend of Agatheâ€™s son. Oh, and Patrick is about to lose custody of his kid, so Agathe and Francois agree to let his son stay at their place as it seems to get Patrick out of their home. But as Patrick ingratiates himself upon Francois, he encourages Francois to cheat on Agathe (â€œSheâ€™s like Antarctica,â€ he says) and soon their marriage is in shambles. But not before Francois hires Patrick to complete some work around the house. As Francois moves out of the house, Agathe and Patrick spar, but some unexpected (or expected, if you know the formula) results ensure.

While itâ€™s true that the first half of the film is a frothy romp, Fontaine pulls in the reins for the second half, giving us a sobering treatise on parenthood, marriage, and unexpected romance. And if this seems meandering, it gives Huppertâ€™s character a chance to transcend into a three dimensional being rather than an ice queen figure. Belgian actor Benoit Poelvoorde is perfectly cast aside Huppert as a goofy slob and their exchanges make My Worst Nightmare one of the best French adult comedies of recent memory. And while itâ€™s certain to be written off as a trifle, where else will you ever get to see Isabelle Huppert dance drunkenly on a pole to a remix of Kelly Rowlandâ€™s â€œWhen Love Takes Over?â€