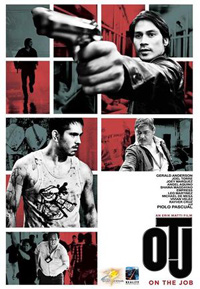 At this point in the history of cinema crime dramas have become a commodity for mere financial motivations and occasionally to throw in a big Hollywood star into the mix. Furthermore, the cops v. thief’s scenario has been so overdone it is hard to believe there could be any new twists, or a spin on the generic corrupt higher-ups, or a anything that would revitalize the genre. Erik Matti’s On the Job doesn’t achieve any of those feats; in fact, it actually makes use of several go-to clichés that cement it as a very Hollywoodesque tale that could easily be remade with a Mark Wahlberg or a Bruce Willis, which would make it even more run-of-the-mill.

Set in the Philippines, the film follows a par of criminals who are among few that are given a job with preferential treatment. This duo, Daniel (Gerald Anderson) and Mario “Tatang” (Joel Torre), are taken out from their ghetto-like prison into the streets in order to work as hitmen for the heavyweights of the corrupt Filipino government. “Tatang” is the veteran, he uses the money to support his wife and put his daughter though Law school, Daniel is young and careless, which makes him a liability when they carry out their “jobs”. Much to his dislike, “Tatang” is going to be paroled soon, for him freedom means losing his job, something that would make his life on poverty-stricken Manila streets very difficult. Much more undeveloped, and perhaps even more unoriginal, is the story of Atty. Francis Coronel, Jr. (Piolo Pascual) the son of a lawman who died doing the right thing. How many times has this been used as a plot point to infuse some depth into flat characters? Too many to count.

Fortunately, despite the predictable nature of the story, there are a handful of incredibly tense sequences that work, which are accompanied by flawlessly staged shootouts to create a film that is, in terms of production value, at the level of any American film of the same kind. It is important to note that the focus on the corroded political system of the Southeast Asian nation might resonate as more poignant for its nationals. A government that proclaims itself a democracy but bluntly bypasses any sort of legality is itself a terrifying tale, circumstances to which the population is accustomed. Yet, for all the potential this premise had to be authentically Filipino, the delivery fails at making the story stand out from a crowded field of extremely similar works.

There is not a dull moment in On the Job, the action flows thought the 121 minutes of its running time. Bad guys get shot (there a no good guys here), people in power are crooked, other people in power are trying to be good but end up crooked, and then more people die. Although entertaining, this story of a couple of part time inmates/part time clumsy assassins never gives any of its characters the time to be prominent or all that meaningful. The dozen secondary characters that roam around the very unfocused screenplay are never really given a purpose besides trying to make up for the lack of emotional involvement. A girlfriend here, a daughter there, a friend over there, it doesn’t matter, they are all going to appear for a couple scenes and not mean much neither for the audience nor the protagonists. Sadly, such indifference could be applied to the film in its entirety.

Continue Reading
Advertisement
You may also like...
Related Topics:Erik Matti, Foreign Film Review, On the Job