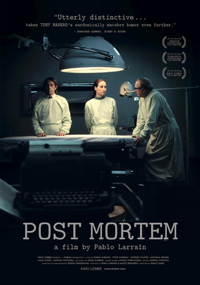 Proving himself to be one of the most sardonic voices currently working in cinema, Chilean auteur Pablo Larrain returns to familiar stomping grounds after the success of his brilliant film Tony Manero, with Post Mortem, a chilly nightmare documenting the onset of the 1973 Chilean military coup. Leaving behind the grotesque and visceral horrors, Larrain retreats farther back in time several years to present us with a more subversive nightmare, a hypnotic exercise that will have you returning to its dark humor and multiple metaphors long after you leave it behind.

Set in 1973 on the eve of Pinochet’s coup overthrowing President Salvador Allende, the democratically elected leader, we meet Mario Cornejo (Alfredo Castro of Tony Manero), a ‘functionary,’ or assistant to the coroner at the morgue. He’s responsible for documenting autopsies. As the country is about to be engulfed in horrific atrocities, Mario decides to approach a woman he has developed feelings for from a distance, his neighbor, a cabaret dancer named Nancy. He walks into her dressing room at the Bim Bam Bum as she is being fired for being too thin, suffering from anorexia.

Ingratiating himself upon her, Nancy begins a disinterested relationship with Mario, but seemingly only because she has nothing left to keep her afloat after losing her job. Referring to him only as ‘neighbor,’ she allows a cold and bizarre dynamic to develop. But since Nancy lives with her father, who is a left wing socialist, her home is raided and she disappears. Mario is left to search for her among the corpses that are quickly piling up at the morgue, but finds that she has been hiding in the attic of her home. Mario agrees to hide and feed her.

Called away with the coroner to administer an autopsy on a very important person that turns out to be the slaughtered President Allende (the determination, they are told ahead of time, will be ruled suicide), Mario is revealed to be unable to use an electronic typewriter while his co-worker Sandra, the coroner’s assistant, is unable to cut into the body. After Sandra suffers an emotional breakdown of sorts at work, Mario rushes home to be comforted by his love, Nancy, only to find her naked with a socialist friend of hers.

On the surface, Post Mortem plays like an anemic black comedy. Most of the horror happens off-screen, and we’re left to focus on the extremely awkward mismatch of Nancy and Mario. It’s not a coincidence that Nancy’s life is falling apart at the same time as the coup. She’s meant to represent Socialism, an economic system that sounds better on paper than it is perhaps realistically attainable. With her very physical state in peril, Mario makes his move to attain her, ignoring the impossibility of a woman like that embracing a man like himself. When he cannot possess her completely, the consequences are dire. But the brilliance of Larrain’s film is that he shows you early on in the film what will happen, but, as if under hypnosis, it takes a moment to realize what’s happened once the credits roll. As nightmarish and macabre as Kafka, Larrain gives us two seemingly insignificant characters that couldn’t be more out of touch with themselves or their surroundings which makes their actions seem all the more comical. After a bizarro dinner date at a Chinese restaurant, Mario asks Nancy to marry him. But then he settles on perhaps having her as a girlfriend, referring to her as his partner to strangers.

Filmed in drab, muted tones, with a maddening humming frequently audible, we focus on Alfredo Castro’s nearly emotionless face, as if he were a specter observing his surroundings (which makes a grotesque smile in one key scene all the more disturbing). His love for Nancy is a sick, dying love, a self-fulfilling prophecy, not unlike the greater political unrest concurrently under way. Larrain’s sister films stand as two horrifying reenactments of Chile’s bloodiest period, a period more often than not explored (cinematically) after-the-fact (Polanski’s Death and the Maiden , 1994, Nostalgia For the Light, 2010) or through the lens of foreign involvement (Gavras’ Missing, 1982). Engrossing, intricate, and intelligent, Post Mortem is an effectively chilling Chilean nightmare, an examination of a corpse/country, masterfully notating the cause of death.