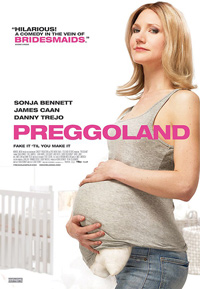 What begins as a concept full of pleasurably subversive possibilities quickly turns into yet another diluted tale of female arrested development in Preggoland, revolving around an emotionally stunted woman who learns an important lesson in the nick of time, thereby exponentially enhancing her own life experience and those in her orbit. Though it’s not as obnoxiously adolescent as its Diablo Cody inspired title suggests, actress turned screenwriter Sonja Bennett’s screenplay fails to use the concept to explore the actual issues underlying her character’s inability to successfully complete the normal trajectory of her sanctioned heteronormative peer group. And so, Jacob Tiernay‘s fourth feature film becomes another one of those wanly charming comedies about how to curb one’s drifting, wayward attitude in order to gain re-admittance into the fold.

After causing a disastrous, drunken scene at her friend Shannon’s (Laura Harris) baby shower, thirty-five year old Ruth (Sonja Bennett) finally starts to realize that she no longer fits in with her group of friends, all married with one or more children. While they tend to their families, Ruth still lives at home with dad (James Caan), works at the same grocery she did since she was a teenager, and jams to her favorite musical artist of her adolescent era, Cece Peniston. But when someone mistakes her hangover for morning sickness, Ruth soon discovers that pregnant women get treated a lot differently. When her friends learn of the pregnancy, they jubilantly welcome her back to the group. Simultaneously, this makes her father happy and her bitchy sister jealous. But when romance looms with a handsome new grocery store manager (Paul Campbell), Ruth procrastinates the inevitable moment when she’ll no longer be able to maintain her ruse.

Rather than explore why we still adhere to the culturally acceptable, taken-for-granted notion that women of a certain class and age must ultimately ‘settle down’ and start reproducing, Bennett’s scenario instead wishes to explore the difficulties of giving into peer pressure to fit in. The only trouble is, we’ve journeyed a long way from the 1950s, so continuing to ensnare female protagonists in these sacrosanct situations feels like training the elephant to remain tied to the stake.

Bennett’s Ruth may be emotionally stunted, immature, and self-involved, but her circle of pregnant friends, attached at the hip since high-school, are about as lively as a clutch of zombified Stepford Wives. Eerily, they really could care less about the relationship that brought about Ruth’s pregnancy, instead pumped up about the fabulousness of procreation. But neither Tierney nor Bennett are trying to criticize the societal expectations that ushered Ruth into her jam, instead placing her into a routine formula of a woman digging herself deeper into a lie that leads us to the cringe worthy moment finally when she’ll be discovered….then forgiven, then all patched up and happy. Only superficially do they explore the added benefits a pregnant woman receives from polite society, here written in a credibility straining scene where her friends inadvertently save her from being fired upon bursting into the back office at her job.

Pregnancy can reap rewards, even a romantic interest, but Preggoland only parades that fact around as irritatingly as those automobiles with bright yellow stickers proclaiming that they have a ‘Baby on Board,’ as if the rest of the world is supposed to be involved, or care, or move out of the way for everyone else’s procreative choices.

Ruth’s actually rather a charming person, a chronic underachiever that clearly has deep seated nostalgia for her high school days with her group of friends. She maintains her narrow worldview by hanging onto her dead end job at a grocery store and by everlasting ignorance for proper adult behavior at serious functions. Bennett avoids making her a completely grating caricature, avoiding a similar trap Melissa Rauch becomes victim to in the putridly misguided The Bronze (though James Caan’s mildly amusing father is much like the patient father played by Gary Cole in that film).

A multitude of other films, recent and vintage, explore the difficulties of friends drifting apart (Life Partners, 2014), or a woman’s choice for alternative practices of pregnancy (Baby Mama, 2008). More enjoyable examples tend to cross boundaries or create characters happy to explore options that work for themselves. But even if the classic comedy of Ginger Rogers in the ridiculous Bachelor Mother (1939) manages to make ‘accidental’ motherhood seem plausible, Bennett’s choice to make her character so desperate to fit in with the friends she’s outgrown that she feigns an elaborate pregnancy is never charming or funny. Instead, it’s disconcerting to realize how cultures tend to treat women better only when they adhere to norms, like insisting they climb up to that time honored pedestal of motherhood. Preggoland isn’t terrible, but plays like a stretched out comedy of errors skit that could have used some daring flair.