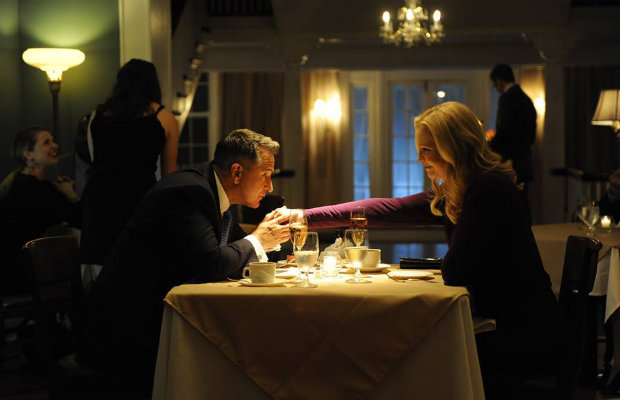 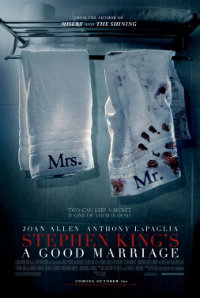 For those hoping for resurgence in the quality of Stephen King stock, the unique promise of A Good Marriage is not the ticket. Sporting King’s first adapted screenplay of his own work since 1989’s Pet Sematary, his customary flourishes are stamped all over it, including the predilection for the perspective of the underdog and plenty of trawling around in the private headspace of the favored character, which inevitably leads to moments of exaggerated artificiality. True, King has (or had) a unique flair for creating intriguing and sometimes empowered female protagonists, but the suburban housewife anchoring the lukewarm scenario here isn’t nearly as well-honed as the film necessitates.

Married for twenty five years, Darcy (Joan Allen) and Bob (Anthony LaPaglia) seem to have found the secret to success. Celebrating with friends and associates, including their daughter, Petra (Kristen Connolly), who is about to be married herself, Darcy and Bob seem to have lost none of their lust for one another, either, even if Bob does seem to have a wandering eye for Darcy’s busty best friend. While his job as an accountant takes him away on various business trips, during one such instance Darcy finds some shocking items when digging in the garage. It seems Bob has several items that belonged to the twelve women that have been murdered by a serial killer as recently reported in the news. But will anyone ever believe Darcy when she’ll have to say she had no clue she’d been living with a madman for years?

Certainly, there’s an intriguing mixture of elements going on here even beyond King’s presence. Director Peter Askin, who started off his directorial career with Douglas McGrath on 2000’s Company Man (which was subjected to some lawsuit issues that caused a significant delay in theatrical release and ended his collaboration, it seems, with McGrath), began with slapstick, dabbled in documentary (2007’s Trumbo), and a relationship drama (Certainty, 2011).

Commanding his most notable cast names since his debut, Anthony LaPaglia, who played Fidel Castro in Company Man, returns to work with Askin, though he’s even more of a caricature here. The heavy lifting is left to Joan Allen in her first significant film role in four years, looking significantly altered. She’s generally amusing, padding through her immaculate home and pulling out annoying little notes her husband leaves her in bottles of pills and boxes of chocolates prompting, “Do you really need one of these right now?” But Askin spends entirely too much time trapping us in the house with Allen’s Darcy, wrestling with whether or not she needs to tell the police her husband is a serial killer.

Ultimately, her rationalization is a compelling and refreshingly selfish one, but not one seriously mined for all its potential. Instead, A Good Marriage feels like a padded out film version of a short story, which is what it is. Once we can get around the cornball exchanges of LaPaglia’s serial killing explanations, the film suddenly gets a bit interesting in its last twenty minutes when Darcy is approached by Stephen Lang’s cryptic retired investigator that’s been haunting the periphery. Of course, he’s conveniently attenuated as well.

Outside of Allen, LaPaglia, and Lang, no one else seems to register, and the development of some supporting characters may have helped relieve the persistent examination of Darcy and Bob’s unrealistically depicted sex life, something King has never quite excelled at even in his prose. And all the innocuous noise leading up to the dramatic reveal is equally as awkward, especially that anniversary party featuring clunky interactions like Darcy’s husband having to explain his rationale for buying her dangly fish shaped earrings as being due to her zodiac sign, Pisces, an passage preceded by drunken girl talk in the restroom about serial killers. Flat and uneventful considering the talents involved, A Good Marriage is an unsatisfying domestic drama from Stephen King.