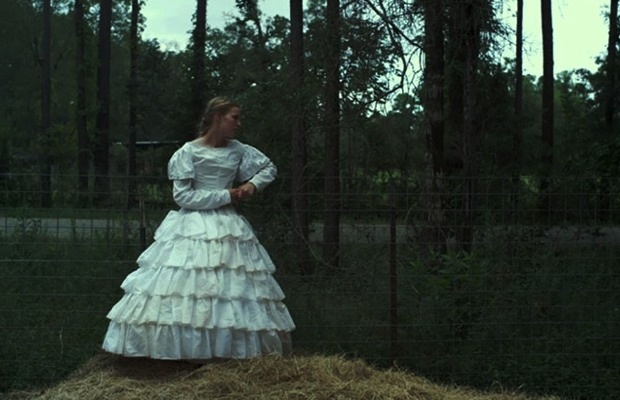 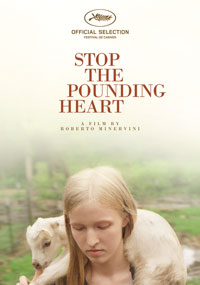 A hybrid of documentary aesthetic and subdued narrative happenings, the third film in a Texas set trilogy from Robert Minervini, Stop the Pounding Heart, most certainly is not for all tastes. Already referred to as Bressonian in its articulation of daily rituals in an isolated Christian community, the film follows The Passage (2011) and Low Tide (2012). But while some may claim it echoes the deliberate aesthetic of a Robert Bresson, its objectivity often feels like a grim purveyor of ignorance, and cynical audiences won’t be able to disguise their smirks towards such archaic rituals, nearly aligning it with earlier works by Harmony Korine.

The film focuses on the Carlsons, a family of goat farmers that sell their dairy products at farmers’ markets. The parents, Leeanne (Leeanne Carlson) and Tim (Tim Carlson) have twelve children, all of whom they’ve raised explicitly by the law of that ole good book, the Bible. They live almost as sparsely as the Amish with lots and lots and lots of discussions about Jesus infecting nearly every conversation. One of the elder children, Sara (Sara Carlson) is fourteen years old and helps rear the younger ones. She meets Colby (Colby Trichell), an amateur bull rider, and her attraction to him makes her begin to question the way she’s been brought up. Although, you’d never guess how she feels based solely on their face to face interactions. Back at home, her mother coaches her on the helpfulness of doubt “because there’s always trust,” and being a Christian isn’t easy. At the same time, Sara and the others girl children are reminded that woman is made from man, and thus, they must remain subservient. “Being submissive doesn’t mean being weak,” they’re told. But you have to remember where you came from it seems. Leeanne concludes, “That can be hard to forget sometimes.”

To believe that pockets of isolated communities in America still flourish as comfortably as the one outlined here seems unfathomable. Basically, all the characters are playing themselves, each of them keeping their real name, which teases at the wavering line being fiction and reality, the strongest asset of Minervini’s film.

Frustrating in its depictions of women still choosing to bask in the ignorance that they must remain submissive to men, Stop the Pounding Heart is an excellent example of the stunted conditioning that arises when human minds are straightjacketed into reading the same material over and over and over again and never being allowed to be introduced to alternate ways of thinking or human beings wholly unlike themselves. This creates a dangerous dulling of the senses, like a hamster in a cage, furiously beating its paws on the running wheel. It only takes meeting one young man she happens to fancy for Sara to realize that something isn’t quite logical in the barrage of Christian teachings that have been pummeled into her skull her entire life. Thus, the film has a rather claustrophobic, hopeless aura about it, a young woman yearning for something more, yet left behind basking outside in an old fashioned dress.

The final, curious imagery seems to signify that Sara and her family are only regressing into the mire, holding on staunchly to a past that no longer exists. The title, taken from a prayer Sara’s mother fervently whispers to the deity she prays to, takes on a poetic sadness, a call to silence one’s own innate and natural life force. This may or may not be Minervini’s intention, but it’s difficult not to comprehend that the rationale for its existence is to depict the utter and ignorantly cruel ways humans continue to cripple their progeny.