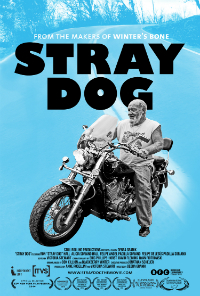 Much less cinematically invigorating than Akira Kurosawa’s noir of the same name and miles away from Tsai Ming-Liang’s formally daring, similarly titled Stray Dogs, director Debra Granik‘s follow-up to Winter’s Bone sees her tread into non-fiction filmmaking with stoic patriotism and cross cultural unity on her mind. Stray Dog genially tells the story of Ronnie ‘Stray Dog’ Hall, a burly Vietnam vet whose self styled rough rider image recalls the leather clad Hell’s Angels whose overbearing rage caused chaos in Gimme Shelter, yet the former marine, still wrestling with PTSD, has let that anger dissolve, replacing it instead with an empathetic hand out for those still suffering from war.

Granik’s film begins with Hall and his gang of biker buddies cruising down the highway, their preferred venue for idyllic meditation. On their roaring hogs emblazoned with American flags and POW logos, the stresses of life and horrors of memory are blown away by the wind on their faces and the roar of the engines. Conversely, as Hall mentions in passing to a fellow vet, the act of saddling up atop a chopper and speeding off into the wilderness may be an attempt to recapture the adrenaline depleted by their experiences in combat. Riding together like zen motorcycling monks covered in tattoos and flowing grey beards, these vets purge themselves of the atrocities they’ve witnessed or deeds they’ve committed, for many of these men, Hall included, can not forgive themselves for the dehumanization they’ve taken part in.

Midway through, the Stray Dog himself admits that during the war he cut the ears off of a man and strung them around his neck like a vicious trophy of battle. Looking back, he only sees these memories through salty-eyed lenses of regret, hoping he can somehow redeem himself. But there are fond memories seared in as well. Like many of the young soldiers sent to the jungles of Vietnam, Hall ended up living and loving in South Korea where he learned the local language, married his first wife and had his first child. That cross cultural openness continues to be a central part of his life to this day, having taken his second bride to be a loving Mexican woman while selflessly helping arrange to have her two teenage sons immigrate to the US so they can live as a family in the trailer court he cares for in rural Missouri. In an act of respect and love for his wife, he spends much of his spare time practicing to better his fluency in Spanish. They share their lives and their cultural heritage, deeply and lovingly.

Granik discovered her big-hearted subject while shooting Winter’s Bone and ended up casting him as a local extra before deciding later on that she’d follow the man’s life for months on end, shooting intimately at his home and subsequently cross country and even across the border into Mexico. Though aesthetically unremarkable, Stray Dog puts forth a humanistic warmth in its surprisingly intricate portrait of progressive middle America masked by conservative garb. War pits cultures against one another and leaves deep dark emotional scars, yet Ronnie Hall proves open-minded empathy can do much to heal the wounds.