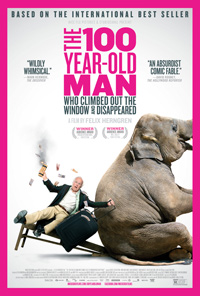 Before you can even wrap your mind around its cumbersome title, you’ll be immediately comparing The 100-Year-Old Who Climbed Out the Window and Disappeared to the structure of the famed American title it clearly resembles, Forrest Gump. Certainly less schmaltzy and more acerbic than that film, the concept wears thin rather quickly as we struggle through a stilted present day scenario considerably padded with useless flashbacks that extend the running time to a screeching two hours of comic buffoonery apparently going on behind major world events.

On the eve of his one hundredth birthday, spry elder Allan Karlsson (Robert Gustafsson) bails out of his ground level window and takes off into the Swedish countryside. A mix-up at the train station finds him in possession of a large suitcase of money, whose owner, an angry skinhead, alerts his cohorts of the mishap. With both the nursing home and the skinheads on the hunt for the one hundred year old man, Allan befriends a willing accomplice on his travels, ending up on a woman’s private farm that includes a retired circus elephant. Meanwhile, we learn of Allan’s colorful past, which encompasses an accidental effect on several historical events. He saved Franco from blowing up a bridge during the Spanish Civil War, worked on both the American and Soviet side of the nuclear bomb program, and inspired the beginning and end of the Cold War, resulting in the fall of the Berlin Wall.

The excuse that the comedic flourishes of Felix Herngren’s film may very well be lost in translation doesn’t quite hold true. The omniscient narration is in English, though the protagonist’s wry observations guiding us through the chronology of bizarre highlights from his ultra-adventurous life seem scatterbrained . If the sappy condescension of Forrest Gump has been replaced with idle cynicism, this feels like simply removing a surplus of sugar and replacing it with a lump of black coal. If this were an American indie, it would easily be described as ‘quirky,’ a term that’s come to represent the euphemistic nadir of all films going to desperate, loopy overdrive in order to lay claim to wavering attention spans. It doesn’t help that Robert Gustafsson, widely regarded as one of Sweden’s funniest actors, is coated with geriatric make-up that still makes him appear two to three decades too young to portray a centurial man.

Herngren’s operating within a particular vein of Nordic slapstick that seems calibrated toward certain acquired tastes, and his ungainly new film is certainly not alone. Fellow Swedish filmmaker Ulf Mamros seems particularly invested in churning out familiar bits of quirk (like his 2003 film Slim Susie, for instance) that feature characters and narratives that could easily be plopped into the formulaic machine of American studio features.

Perhaps if Herngren had been able to contain this haywire endeavor and reduce it into a less cumbersome package, this would have seemed less grating. But with a sprawling cast of characters all more or less vulgar, ridiculous, and unpredictable, this historical romp through history is on the opposite extreme of Forrest Gump, as equally desperately unrealistic in its attempts at unruliness.