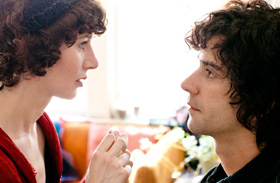 Writer-director-performance artist Miranda Julyâ€™s The Future less resembles a movie than a series of random post-it note ideas stuck to Julyâ€™s fridge door. This inferior follow-up to the flawed but occasionally engaging Me, You and Everyone We Know wants to be a surreal, time-twisting indie romance, but refuses to make more than glancing ironic gestures towards the romantic or the mystical. Every line of dialogue, every character, even every prop seems to exist within quotation marks. Absent a true emotional anchor, this story about a long-term thirty-something couple questioning their relationship and life goals adds up to little more than a scattered showcase for Julyâ€™s self-absorbed quirk.

The stunted, episodic story follows aimless L.A. couple Sophie (July) and Jason (a drab Hamish Linklater), whose decision to adopt a dying cat named Paw Paw provokes existential panic. They each quit their jobs and separately pursue alternative destinies, which at times involve self-degrading adultery, a talking moon and the stoppage of time. Will their relationship survive these strange interludes? Does it matter? (For a superior L.A.-set love story with charm, humor and an unashamed sense of the magical, see Steve Martinâ€™s 1991 L.A. Story).

The basic visual conceit of Miranda July’s film persona is promising but never creatively developed, namely, her silent movie star face, theatrically pasty, timelessly waifish, a singular ethnicity dolled-up into iconic universality. Like most silent movie stars, however, her spell tends to evaporate once she opens her mouth. July wasn’t made for talkies, an incongruity she chooses to exacerbate by filling her movie with little else but talking.Â Especially difficult to tolerate is the grating gargle she squeezes out in slow motion for the cat’s voice-over; she sounds like Lisa Simpson with esophageal cancer.

Instead of embracing the expressive possibilities of silent-movie physicality, July instead seems to envision herself as a live-action adaptation of some anachronistic book illustration, a kind of failed reverse experiment of the premise behind the wonderful The Illusionist. In other words, instead of invigorating old-fashioned illustration techniques via cinema, she is handicapping cinema with still-image aesthetics.

It’s not that July doesn’t have any good ideas. One sequence where Sophieâ€™s pregnant friends transform with each reverse shot, during the course of a single conversation, into their own children, grandchildren, great-grandchildren, where generations fly by in a bewildering matter of seconds, artfully captures Sophieâ€™s helpless sense of disconnect from the marching tides of maturity around her. And the sub-plot of Sophieâ€™s escape into a vaguely masochistic suburban domesticity is full of unexplored potential. Reliably sleazy character actor David Warshofsky hits a perfect note of oblivious vulgarity as the single dad that Sophie uses as a tool of self-punishment. But the temptation of this middle-class limbo as a retreat from her problems is never sincerely dealt with; itâ€™s a sub-plot that never goes anywhere and ends before it begins.

This narrative failure is a symptom of Julyâ€™s central pathology: She refuses to let her story and characters take on a life of their own and evolve to their full potential because then they might take attention away from herself. The possessiveness of Julyâ€™s ego constipates the movie. If she has any chance of becoming a great filmmaker, July needs to liberate herself from paralyzing adolescent self-fixation. She could start by trying to make a movie about someone else for a change.