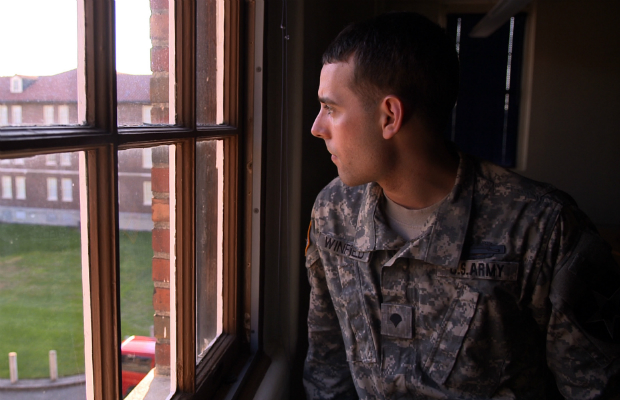 Kill or Be Killed: Krauss Meticulously Reassesses the Situation 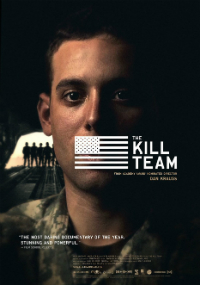 Part courtroom drama, part frontline footage film contextualized by Morris-esque investigative interviews with those on trial for the murder of innocent Afghan citizens under the star spangled banner of the US military, Dan Krauss’s incendiary documentary unveils the horrifying truths behind the media coined platoon, The Kill Team. Of the same ilk as The Invisible War, Kirby Dick’s recent inquisition into the military’s history of legal murkiness and systematic corruption, Krauss’s film sides with a young soldier named Adam Winfield whose reports to military authorities about the unprovoked killings of innocents within his platoon went ignored, until he himself was arrested alongside the men he was desperately trying to free himself from.

Winfield’s close-knit unit is shown dressed to the nines for Krauss’s interview, honestly sharing their versions of the events that took place with frightening candacy, smugly reflecting on their on-duty decisions, several unreservedly admitting their crimes to camera, but it’s the footage the soldiers shot themselves – of them patrolling, discharging weapons and subsequently posing with the bullet riddled bodies of those they killed, smiles on their faces – that send chills down the spine. Or, just has mortifying, the immediate military investigation interviews that were filmed as legal record in which each soldier, minus the macho coercive squad leader, Gibbs, whose ominous absence from the film entirely seems the only evidential pitfall within Krauss’s rigorous investigation (he was evidently unavailable due to his life sentence for murder), aurally record their side of the story with what seems like the only bit of fear they share.

Echoing other recent post-traumatic examinations like Hell And Back Again and Poster Girl, Winfield is seen in session with his psychologist, talking out several key events, including the night of his arrest, conveying with a familiar disheartening emptiness, part visceral shell shock, part deep seeded disappointment with the institution he was once so proud to serve, the nightmares with which he now lives. Despite his efforts, he was made to participate in this culture of violence and there is nothing that can change what happened as a result.

Through meticulous editing of the multiple perspectives, including that of Winfield’s parents who were the first to hear of these plotted killings via Facebook conversations with their son months before Adam was coerced into participating in the action, Krauss has crafted quite a case against the group-think brainwashing techniques of the US military in which a young man’s gun is an extension of their very being which is only fully validated by the letting of blood. The sad truth is that in the military murder of foreign citizens is thought a far more reasonable offense than whistleblowing. The Kill Team starkly asks for us to try to reconcile the shifting gaps between patriotism and imperialism, aiding and oppressing, recreation and self-preservation. Hint: It can’t be done, as long as the innocent continue to be punished for trying to do what is everyone’s moral responsibility.