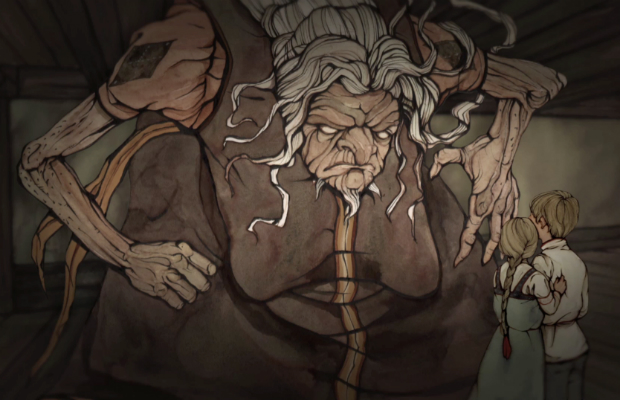 Of Forest and Folklore: Oreck Lenses Extraordinary Essay on Eastern European Relationship with Land and Myth

Recently, Jessica Oreck has been settling into a more time sensitive short form with her ambitious etymology web series Mysteries of Vernacular, in which she unearths the surprising origins of the English language in two minute snippets. It’s understandable when you consider her densely layered latest feature, The Vanquishing of the Witch Baba Yaga, has been over five years in the making. The project began as an ethnographic exploration of Eastern European mushroom foragers in line with her beetle hunting debut Beetle Queen Conquers Tokyo, but it’s since transformed into something much more mysteriously enigmatic. Oreck’s dreamy tale unfurls as a poetic travelogue of a timeless Slavic territory, its inhabitants still following long held traditions and bearing all the scars of the region’s tumultuous history. The abiding antiquity of her gorgeous Super 16 footage is then entwined with the mythical forest fable of Baba Yaga, transforming the impressionistic imagery into something cinematically supernatural that invokes the inherent tragedies of the slow disconnect between fading cultures and the stories that keep them tied to the land they’ve harmoniously lived on for generations.

Few filmmakers today are working within the confines of the documentary form with such a sense of creative freedom, where the closest stylistic comparisons are the intoxicating essayist work of Chris Marker or Oreck’s alchemic contemporaries Ben Rivers and Ben Russell. Like Marker, Oreck tells her transiently reflective tale via voiceover once removed. A pair of narrators, one in Russian, one in Polish, recant in turn Oreck’s scripted ruminations on memory, nature and the cultural threads that knit them tightly together, as well as the story of Ivan and Alyona, a young brother and sister who lose their way in the forest, stumble upon the fearsome, yet ambiguous witch Baba Yaga, and are forced to carry out a series of tasks under the threat of being gobbled up. Gorgeously illustrated by Devin Debrowski in the style of famed Russian illustrator Ivan Bilibin and subtly animated by Michelle Enemark to replicate the elegant look of a children’s pop-up book, Baba Yaga comes to life in chaptorial segments that are then poignantly reflected by cinematographer Sean Price Williams’s ravishingly melancholic imagery, Oreck’s lyrically composed aural overlay and a moody score by composer Paul Grimstad that haunts with the humanity of a cello and the rhythm of a heartbeat.

The result is a meticulously constructed collage of Slavic folklore and modern day antiquity that feels as evocative as a daydream and overwhelming as the potential losses Oreck conveys. Textured footage of wood cutters, graveyards, weddings and children ground us back in the world we know, but in showing us these clips the director’s intention seems to reflect the cultural traditions which have been compartmentalized within mythology, as if by transmuting the tragedies of history into stories of local legend, people might be able to transcend the pain of political unrest and cultural upheaval that has plagued the region for centuries. Baba Yaga and the soldiers which Ivan and Alyona come upon in the forest are but a stand in for the uncertainty the Slavic population have come to confront year after year, bravely facing their fears but always turning to the land for sustenance and support. Late in the film, Oreck seems to suggest The Vanquishing of the Witch Baba Yaga’s ideology with an earthy manifesto that roughly states that to detach from the land is to detach from history. In contrast, Oreck’s film is a work out of time that springs from terrain distinctly Slavic in nature, a kaleidoscopic patchwork of Eastern European lore and poetic yearning that bears all the allusive markings of a preeminent artist acclimating to her full potential.