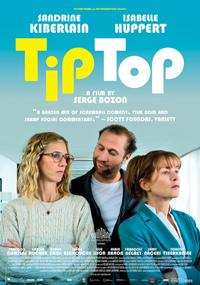 Actor turned director Serge Bozon is the most visible member of a small coterie of filmmakers operating independently outside of the French film system, including names like Marc Fitoussi, Axelle Ropert, Jean-Paul Civeyrac, each with several credits to his name, though generally without international distribution. Critic Scott Foundas penned a succinct and incredibly worthwhile write-up on this group several years back, not too long after Bozon’s third feature La France (2007) broke through the distribution fog. Discussing terms like New New Wave, etc, and the dangers of bracketing clusters of filmmakers with such labels, there is a distinct flavor to their films as we witness slick sidestepping and reinvention of narrative form and motif, at least enough to note a similar temperament amongst their works (perhaps something more like Frayed Wave works better). Bozon’s latest genre mash, Tip Top, which premiered in the Director’s Fortnight at Cannes 2013, was at last treated to a limited release in New York. A curiously unique and incredibly bizarre adaptation of a British thriller by Bill James, Bozon has created another strange hybrid of form with this blackly comedic, sexually perverse examination of racial inequality and notable political bigotry.

An Algerian police informant is found murdered in the French suburbs and Internal Affairs investigator Esther Lafarge (Isabelle Huppert) is assigned to the case. She takes a recent underling, Sally Marinelli (Sandrine Kiberlain), demoted to IA for some type of inappropriate conduct. Arriving with a whirlwind of force, Esther immediately clashes with Robert Mendes (Francois Damiens), with whom the informant had been close. Forcing themselves upon the dead man’s wife (Karole Rocher), they run in circles and are distracted by their own extreme sexual peccadilloes. But two more surprise murders seem to finally point them in the right direction.

Co-written by his regular screenwriter Axelle Ropert, along with Claude Chabrol’s regular scribe Odile Barski, Tip Top shares two actresses that fellow filmmaker Marc Fitoussi has also worked with recently, Isabelle Huppert and Sandrine Kiberlain, here playing each other’s foil in what appears to be a reconstituted good cop/bad cop scenario with two very strange women. Huppert is internationally regarded as the Grand Madame of sexual perversity thanks to iconic roles in fare like The Piano Teacher (2001) and Ma Mere (2004), so her masochistically inclined Esther Lafarge is an excellent cockeyed rendition of that persona here played to bizarre and incredibly comedic effect. Away from her husband on investigation, a nighttime visit results in one of their extended bouts of heated, violent exchange, which leave her with a nose wound emitting a constant stream of blood throughout the final portion of the film. Dribbles of blood are caught in constant drip with incredible nonchalance onto her outstretched tongue, like a frog catching flies.

Her relationship with Kiberlain’s gawky Sally almost drowns out whatever else is going on in the film. Sally’s penchant for peeping is unsettled by her proximity to the overbearing Esther, so much so that she eventually begins to act and dress like Esther, a transformation which leads to the film’s perfect closing moment.

But Tip Top is also making statements about political and social unrest versus the privileged French citizens and generations of supplanted Algerians. More than once the police chief gazes at length at news footage concerning the rampant rioting going on in Algeria, juxtaposed laughably with the aberrant investigation pertaining to the murdered informant being run by Esther and Sally, representatives of Internal Affairs proving that the rot of bureaucracy has tapered protocols into endless series of ineffectual motions. A whole population of immigrants forced to speak French fluently, meanwhile, are at odds with Mendes (an always entertaining Francois Damiens, here a latent misogynist who savagely rips into a sandwich while sauce gushes over his chin like blood while snooping for dirt on the two women) and his bumbling Arabic.

If Esther and Sally seem to operate within a zany, slapstick continuum, their exchanges with those in more dire circumstances feel even more awkward and uncomfortable and it’s a memorable achievement from Bozon, because Tip Top resists traditional codes and cues, presenting a universe where nothing is in the kind of organized shape its title promises. For those reveling in the perverse and uniquely offbeat (especially when you throw Huppert and Kiberlain into the mix), Bozon’s Tip Top is not to be missed.