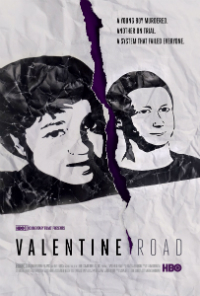 On February 12, 2008, in Oxnard, California, an openly gay 15-year-old student named Larry King was shot in the back of the head at point-blank range in front of a classroom full of fellow students by his classmate and repulsed love interest Brandon McInerney, then all of 14.  After this community shattering moment of horror, blame was tossed between parties, careers were ended and lives forever altered, but strangely, the shooting that occurred at the E.O. Green Junior High School was not the next Columbine, destined to remain ingrained in societal memory.  King’s murder and McInerney’s subsequent trial, where he was tried as an adult with the possibility of life in prison, only received minimal attention in the national press.  Despite living within miles of the event, director Marta Cunningham was shocked and appalled to hear of the story only after the fact.  With her extraordinarily powerful debut documentary, Valentine Road, she digs deep into Oxnard’s cultural fabric in search of some kind of understanding of why one child could take the life of another in response to the outward acceptance of that child’s own sexual orientation.

Knowing in her heart that both the murder of a child and the imprisonment of another even younger are both wrong, Cunningham boldly looks beyond the bewildering headlines and the obvious certainties to give compassion and an air of understanding to both children through the aural perspectives of classmates, teachers, investigators, family members, prosecutors, defense attorneys and even jury members from the drawn out trial.  Several of them, friend’s of Larry and their compassionate but professionally shunned teacher, were in the room when Brandon pulled the trigger.  Physically reeling and drenched in tears, they recount the traumatic event moment for moment, the graphic photo evidence appearing onscreen to reinforce the woeful anguish in their quivering voices, but this is just to set the stage for the moral conundrum that follows.

We soon find, somewhat unsurprisingly, that Brandon was raised by a drug addicted mother and her increasingly abusive lover.  He endured countless beatings by his makeshift father figure and audibly witnessed his mother being literally shot in the arm in the heat of a shouting match, yet the toxic family remained.  His mother, brother and still devoted girlfriend all appear in the film, shocked by the events, yet sympathetic to the cause – and what’s most shocking about these findings is that they are not the only ones that feel this way.  Teachers, community members, and even jury members publicly side with the young murderer, concluding that his actions were an act of self defense against Larry’s public acceptance of his own gender identity.  Within a staunchly reciprocal narrative that weaves its copious characters into a double-sided depiction of extreme intolerance and an unyielding progressive hope in response, Cunningham pitches the idea that if raised in a community where bigotry is socially expected, it’s possible that Brandon McInerney is only slightly less a victim than Larry King.

It’s a hard reality to swallow, a truth only a brave filmmaker bearing a decree of tolerance would dare indulge.  As a courageous new voice in non-fiction filmmaking, Marta Cunningham shows profound compassion for both of these tormented teens, while remaining prudently unapologetic in emotionally siding with King, his pro-LGBT supporters and anyone with any good sense.  Made masterfully with the general populous in mind, her film aims for the heart with facts in hand and the expectation of empathetic waves of revulsion, rage, pity and mourning.  Valentine Road may not be an easy path, but it’s certainly one the populous should promptly and impartially traverse.