Award season as come to a close, and we’ve all been witness to what is a historic unprecedented run for one urgent film. The ripple became a wave when we were on hand to witness Laura Poitras collect multiple awards at the Cinema Eye Honors, and as predicted, the Academy Awards capped off a historic awards season run with an Oscar win. Here is our roundup and recap of the previous month’s film festival and award season headlines related to the docu film world. 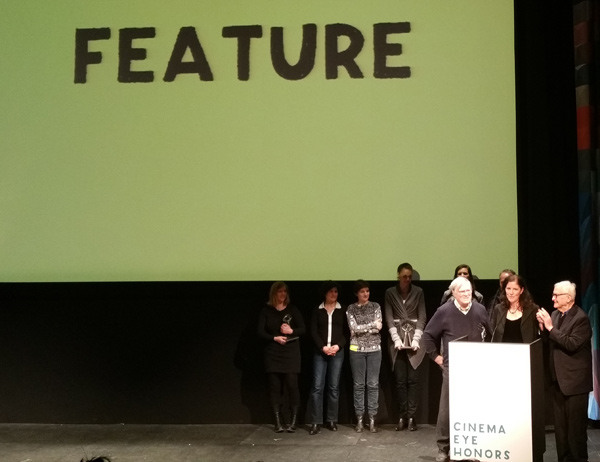 Academy Awards
While Citizenfour took home the award for best documentary of the year, Ellen Goosenberg Kent and Dana Perry’s Crisis Hotline: Veterans Press 1 was given the Oscar for best short doc.

Big Sky Documentary Film Festival – USA – February 6th – February 16th After ten days of non-fiction nirvana in the valleys surrounding Missoula, Montana, Dave Jannetta’s supreme Hot Docs preemed small town mystery Love and Terror on the Howling Plains of Nowhere (see trailer below) won the Big Sky Award for honoring the character, history, tradition and imagination of the American West. The top prize for doc feature went to a Norwegian film about a golden aged brother and sister titled Siblings are Forever, directed by Frode Fimland, while Andrew Renzi’s Fishtail received the Artistic Vision Award for presenting “a quiet nostalgic beauty for a way of life that has drifted from mainstream consciousness.”

Film Independent Spirit Awards
It may have been more productive to list the awards that Citizenfour didn’t win. Poitras and the team once again took home the honors for Best Documentary (see her acceptance speech below), foreshadowing her Oscar win the following night.

Hot Docs Film Festival – Canada – April 23rd – May 3rd
Midway through the month, Hot Docs announcd a selection of 17 films primed to screen as part of their Special Presentations program come late April. Along with a pair of world premieres in Robert Cohen’s Being Canadian and Violeta Ayala’s The Bolivian Case are various festival circuit imports, including the Ross Brothers’ Western, Tom Roberts’s Every Last Child and Camilla Nielsson’s Democrats.

MoMA’s Documentary Fortnight – USA – February 13th – February 27th
Started back in 2001, this NY non-fiction staple has been bringing cream of the crop docs from around the world to domestic soil. This year the series played host to 21 feature films and seven short films, a performance lecture, an archival film program, and a flat-screen installation, among them was Storm Children, Book One, the latest by slow cinema master Lav Diaz, Around the World in 50 Concerts (see trailer below) by Peruvian-born Dutch director Heddy Honigmann and Arash Lahooti’s Iranian born Trucker and the Fox.

SXSW – USA – March 13th – March 21st
With each passing year this Austin based fest seems to leave a bigger footprint in the doc landscape. Boasting of big names and big titles like Alex Gibney’s Steve Jobs: The Man in the Machine, Alex Winter’s Deep Web and Ondi Timoner’s BRAND: A Second Coming, unearthed retro gems in Les Blank’s 1972 unreleased film A Poem Is A Naked Person and so much more, SXSW announced their lineup this past month.

True/False Fest – USA – March 5th – March 8th
Being that I’ll be attending this non-fiction haven later this week, I couldn’t have been more overjoyed by the news of the lineup announcements that dropped mid-February. Playing like a greatest hits of the last half year, the fest is screening critically lauded docs from all around the world, including big names from Sundance like Brett Morgen’s Kurt Cobain: Montage of Heck and Morgan Neville and Robert Gordon’s Best of Enemies, but a variety of littler known films like Tonje Hessen Schei’s Drone (see trailer below) and Abner Benaim’s Invasion.