Well folks, after a rather long and brutal winter (at least for me here in Buffalo), we are finally heading into the wonderful warmth of summer, but with that blast of sunshine and steamy humidity comes the mid-year drought of major film fests. After the Sheffield Doc/Fest concludes on June 10th and AFI Docs wraps on June 21st, we likely won’t see any major influx in our charts until Locarno, Venice, Telluride and TIFF announce their line-ups in rapid succession. In the meantime, we can look forward to the intriguing onslaught of films making their debut in Sheffield, including Brian Hill’s intriguing examination of Sweden’s most notorious serial killer, The Confessions of Thomas Quick, and Sean McAllister’s film for which he himself was jailed in the process of making, A Syrian Love Story, the only two films world premiering in the festival’s main competition. Out of competition, we get the likes of Benedikt Erlingsson’s opening night oddity The Greatest Shows on Earth: A Century of Funfairs, Circuses and Carnivals which was scored by Georg Hólm and Orri Páll Dýrason of Sigur Rós and the Head of the Pagan Church in Iceland, Hilmar Örn Hilmarsson, as well as Addicted to Sheep (see trailer below) by director Magali Pettier, a film that appears to be the aesthetic anti-thesis to Ilisa Barbash and Lucien Castaing-Taylor’s Sweetgrass.

This past month we saw Cannes set ablaze with Kent Jones and Asif Kapadia’s much anticipated films Hitchcock/Truffaut and Amy, respectively, yet in the midst of all the red carpet hub-bub filmmakers Werner Herzog, Ron Howard, Matt Tyrnauer and Jason Aron each quietly previewed snippets of their projects that are currently in production for potential buyers. Herzog screened a portion of his latest cinematic incapsulation of man vs the wild in Into The Inferno (see still above and festival flyer below), while Howard presented unseen footage of early performances from his still untitled Beatles’ touring years doc in anticipation of hot international sales. Tyrnauer and Aron on the other hand screened segments of their films, Scotty and Back in Time, both of which focus on Hollywood history – Tyrnauer’s, according to Hollywood Reporter, “An adaptation of Scotty Bowers’ sex-fueled Hollywood tell-all Full Service…that recounts the sex lives of a slew of icons including Cary Grant, Vivien Leigh and Katharine Hepburn”, while Aron’s revisits the Back to the Future film franchise. 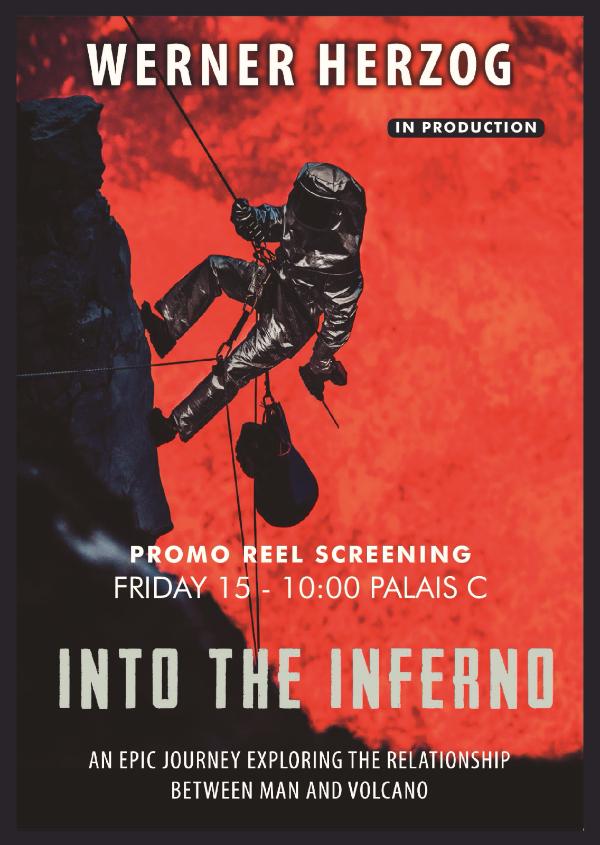 While festivals surely incite excitement about upcoming films, plenty of films on this list fly mostly under the radar, only popping up occasionally in social media or local news stories. One such film that recently resurfaced was Annie Waldman and Daniel Patrick Carbone’s Phantom Cowboys, which recently received a new trailer (see below and compare it to an initial, radically different extended trailer that was released a couple years back) that seems to revel in ethereal landscape portraiture while recalling Tracy Droz Tragos and Andrew Droz Palermo’s recent rural-living Sundance Grand Prize winner Rich Hill.

Playing on the same general tone and aesthetic as Waldman and Carbone’s production while literally touching on the idea of scenic portraiture in the title of her film, Brett Story’s The Prison in Twelve Landscapes also saw its first teaser (see below) hit the web recently. The film explores the idea of confining institutions through social observation while never actually showing an actual prison. Story was recently awarded the inaugural New Visions Award from the DOC Institute.

And finally, there are plenty of crowdfunding campaigns currently in full swing (go help finish Orson Welles’ unfinished final film right now!), a pair of which have been inching up this list for some time. After securing capital from the Sundance Documentary Fund, The Catapult Film Grant and a Jerome Foundation Grant, Justin Schein (director of No Impact Man) renamed his film Left on Purpose (formally titled The Last Go Round) and set up a Kickstarter that was almost fully funded in just a matter of days and still has several weeks to go. At the same time, director Shalini Kantayya’s needs the cash to cover the costs of archival clearances, composer fees, color, sound and mastering to have her film, Catching the Sun, ready for its LA Film Festival premiere next month and is still in dire need of help.

As mentioned previously, for those attached to any of the docs mentioned below — please feel free to share any updates on the status of your projects. I can be reached at jordan [at] ioncinema dot com. Here is my most anticipated Top 100 docs in the pipeline.