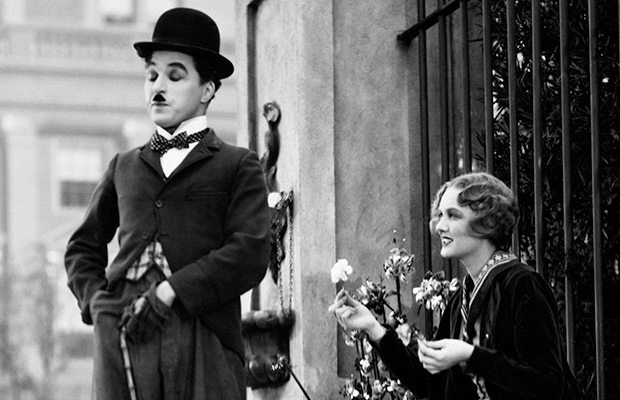 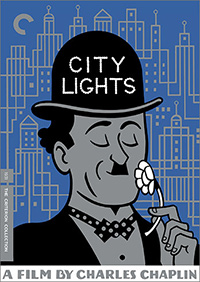 The biggest surprise about this month’s release of Charles Chaplin’s City Lights (1931) is that it wasn’t already a part of Criterion’s prestigious collection. Though several of his other masterworks have already been featured, it’s this 1931 title that many deem to be the quintessential of all his Little Tramp films, a light and breezy comedy that’s as effortlessly comical as it is undeniably moving. Credited as his last silent film, it stands as one of the most revered silent films ever made, famously released after the advent of sound due to Chaplin’s steadfast obsession with cinema as a silent art. And to make the Tramp speak would only have resulted in tantamount sacrilege, a magic and mystery that would have evaporated with the insistent new technology.

A tramp (Charles Chaplin) wanders the streets of Los Angeles, involved in a series of comic scenarios before making the acquaintance of a beautiful young blind woman (Virginia Cherrill) selling flowers. Through his interactions with her, the tramp is able to convince the young woman that he is a rich gentleman. Soon after, the tramp saves a drunk millionaire (Harry Myers) from killing himself and the two become fast friends, setting out on the town, swilling booze. But sobering up the next day in his home, the millionaire doesn’t seem to remember who the tramp is (until he drinks again, that is). The tramp sees an ad in a newspaper for a doctor that has the capability of curing blindness and so he sets out to get his millionaire friend to pay for the operation.

Borrowing his friend’s car after another nightly excursion, the tramp gives the blind girl a ride home and finds that she lives with her grandmother (Florence Lee). But before he can get the funds for her operation, the young girl falls deathly ill and is soon faced with eviction. In order to get some fast cash to help her out, the tramp gets involved in a boxing match with a brawny man (Hank Mann), and another snafu with the millionaire finds the tramp being accused of burglary and hauled off to prison, but not before he’s able to get the woman the money she needs. Released after his sentence, the tramp stumbles into the young woman, her vision restored.

Criterion has released City Lights in a dual format set, though the DVD disc is unnecessary as the digital restoration is best experienced on Blu-ray. A handful of extra features that are of interest, if not particularly noteworthy, pale in comparison to the booklet featuring a 1966 interview with Chaplin and an essay by critic Gary Giddins. Aficionados should enjoy Chaplin Studios: Creative Freedom By Design, in which visual effects expert Craig Barron discusses the film, but more universally appealing is a 2003 documentary featuring Peter Lord, co-founder of Aardman Animations, touching upon historical aspects of the production (such as Chaplin’s dislike of his leading lady, Virginia Cherrill). Archival footage from the production and an expert from his 1915 short film, The Champion, are also of interest.

There are a handful of laugh out loud moments, perhaps hitting a zany peak where the tramp and the millionaire drive drunkenly through the early morning Los Angeles streets. After several close calls, the tramp suggests that the millionaire drive more carefully. “Am I driving?” he shouts. Likewise, the much hailed boxing sequence is preceded by a delightful set-up where an ingratiatingly fey Chaplin creeps out his opponent to the point where he hides himself while disrobing.

While City Lights plays like many of Chaplin’s other films featuring the Little Tramp, in that the writer/director/star is in top form with his sublime pantomime and untouchable skills as physical comedian, the something special is its much hailed final sequence, when the tramp and the young woman reunite. It’s such a quick, uncomplicated and simple scene, but one that holds a delightfully tender poignancy. We witness the disheveled tramp taunted by a pair of callous young paperboys, and we see the young woman and a friend laughing from a storefront window as they fuss with a floral arrangement. We hold our breath for a moment—is she going to be cruel to the man that paid for her eyesight? But their eyes lock and the tramp is paralyzed to see her. He drops a flower he’d been holding, and she beckons him into the shop, to offer a replacement. He stands still, and she goes to the door to meet him outside. She clasps his hand, and recognizes who he is. They exchange a meaningful gaze, a moment sweetly rendered, and the film fades to black with the tramp’s widening grin. It’s an arresting and magical moment, Chaplin at a perfect peak, a human interaction visually conveyed without a use or need for words. There’s a power in these frames, a moment that easily could be used to explain, shorthand, the human attraction to the cinematic form.