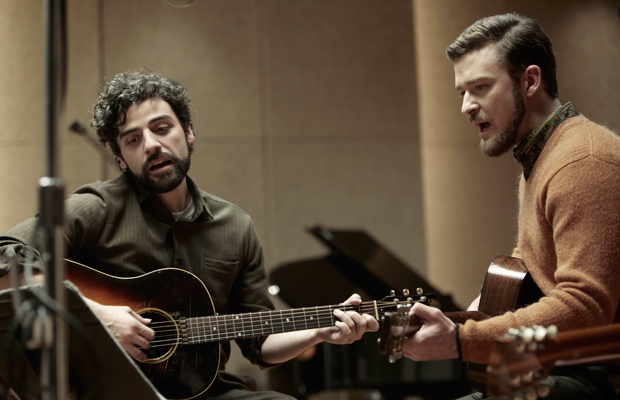 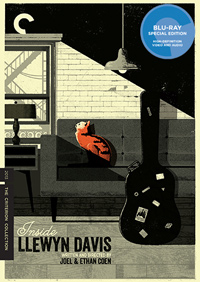 Anyone who’s ever had their musical ambitions crushed by the ever oppressive forces of real life will find a great sense of empathy within Joel and Ethan Coen‘s great reimagination of the Greenwich Village folk scene, Inside Llewyn Davis. Essentially a dour depiction of the limitations of artistic ambition and musical performance as a viable career, as well as a remarkable portrait of the Village on the cusp being redefined by the arrival of Bob Dylan and the commercialism of the genre, the film stands as a unique companion piece to Don’t Look Back and I’m Not There that pays tribute to what came before with the rye eye of the Coens.

As music producer T Bone Burnett has said, the Coen brothers might be the luckiest filmmakers in the universe, having somehow managed to find both a fantastic actor and a fine musician encapsulated within the same body in Oscar Isaac. The man he’s been asked to play, Llewyn Davis, is a guitar slinger of exquisite whose musical integrity as an authentic artist is of utmost importance, personal well being be damned. He’s a punk, way before punk was a thing, fuck the world attitude and all, paying dearly for it as time wears on. Following the death of his professional partner, he’s force to pursue a solo career, surfing couches and burning bridges all along the way, garnering the respect of his peers, such as the commercially folksy Jim (Justin Timberlake) and Jean (Carey Mulligan) – whom he’s possibly impregnated in the course of his misdeeds – while all aspects of the rest of his life fall to pieces.

With the help of associate music producer Marcus Mumford and input from various collaborators like Timberlake, Isaac and others, Burnett and the Coens created new arrangements of the work of MacDougal Street standby Dave Van Ronk, whom much of the Llewyn Davis character is based (to the point of blatantly copying the title and cover art of Van Ronk’s 1964 LP, Inside Dave Van Ronk). The film is peppered with tracks from Van Ronk’s repertoire performed by Isaac, including originals like Hang Me, Oh Hang Me and old folk tunes of murky origin such as the hauntingly beautiful Fare Thee Well (Dink’s Song), each of which are remarkably, and highly unusually, performed completely live in the film and presented in their complete form, running the entire length of each song. While there is much personality portrayed by Isaac and his fellow cast members and enough muted gags to garner our admiration, it is this complete and utter respect for the music and the men and women who performed it for little more than the intangible rewards of merely doing so that makes this such a striking work of cinema.

The only truly circular narrative within the Coen catalog, Inside Llewyn Davis ends where it began, and in between those sad sack moments we witness the struggling singer song writer meander along a winding road of endurance tests, performing for himself alone. Even when given the opportunity for a professional break in an audition with the Albert Grossman (famed manager of Bob Dylan, Janis Joplin and many more) stand in Bud Grossman (played with pitch perfect scorn by F. Murray Abraham), he chooses to play what one might guess to be the least commercial song in his repertoire, The Death of Queen Jane. The lyrics, though depicting the birth of a child, seem to perfectly sum up his own ill-fated labor of love: “Queen Jane lay in labor full nine days or more/’Til her women grew so tired, they could no longer there/They could no longer there.” It’s utterly heartbreaking, but like the large majority of ambitions and talented musicians the world over, sometimes one must give up, embrace a career outside of music, and in the words of Llewyn himself, just exist.

The Criterion Collection never cease to surprise. Despite Inside Llewyn Davis having already received a fine Blu-ray release from Sony Pictures Home Entertainment, Criterion has deemed this film worthy of more, and thus stuffed their take on it to the brim with informative supplemental goodies, from interviews and concert films to making-of pieces and contextual historical docs. Plus, with an absolutely flawless digital transfer and an DTS-HD 5.1 master track that is hair-raisingly gorgeous in its clarity and depth, this is a stunning, must own rerelease.

Audio Commentary
Featuring a trio of Greenwich Village folk experts in authors David Hajdu (Positively 4th Street: The Lives and Times of Joan Baez, Bob Dylan, Mimi Baez Fariña, and Richard Fariña), Sean Wilentz (Bob Dylan in America), and Robert Christgau (Going into the City), this track is remarkably enlightening and amazingly educational on the lines of who characters are based on, how locations are important in terms of folk mythology, where these songs came from and tons of other fascinating facts about folk, film and where they mix within Inside Llewyn Davis. I could listen to these guys talk for hours, and it seems they could have done so had the film continued past two hours.

The First Hundred Feet, The Last Hundred Feet
Within, filmmaker Guillermo del Toro and the Coen brothers discuss the evolution of their approach, their inspiration for stories and more. Let’s hope Criterion can convince del Toro to be a repeat interviewer, as he’s really a fantastic point man, astute, enthusiastic and profound in his observations. 41 min

Inside “Inside Llewyn Davis” (2013)
Centered around behind-the-scenes, making-of footage, and conversations with the filmmakers themselves, this piece is a revealing doc about how the film came together, the inspiration for it and much more. 43 min

Another Day, Another Time (2013)
Mixing pre-performance jam sessions, practice dates and a live concert celebrating the music of Inside Llewyn Davis, featuring Joan Baez, Marcus Mumford, Punch Brothers, Gillian Welch, Jack White, The Milk Carton Kids and others, not to mention Oscar Isaac himself, this is a stunning collection of modern folk artists playing a mix of standards, jams from the Coen brothers film and new tracks. 101 min

The Way of Folk
This conversation between music producer T Bone Burnett and the Coens about folk music, with illustrations by Drew Christie, digs deep into where the songs featured in Inside Llewyn Davis came from, how they’ve changed and how they adapted them or the picture. 16 min

Before The Flood
Featuring music writer and historian Elijah Wald discussing the NYC folk scene in the late ’50s and ’60s and how in sync the Coen brothers were with the period for this film. He kind of comes off as a pompous snob, but he’s informative for sure. 19 min

Sunday (1961)
A short film by Dan Drasin documenting a 1961 clash between folk musicians and police in Washington Square Park. The Coen’s found much inspiration from this film, most especially a shot of a young man being arrested while clutching his autoharp. 17 min

Trailers
With six total, I’ve never before seen so many trailers for the same film been included in a release, but it’s interesting to compare them, noting the different reveals, beats and marketing strategies between them.

Booklet
This is less a booklet than a beautiful little poster with release notes, transfer details and an essay by film critic Kent Jones.

While the first screening of the film seemed to show a somewhat cold, unrelatable prick of a folk musician taking advantage of everyone he could in an effort to make his way up the musical latter, it wasn’t until rewatching Inside Llewyn Davis that an immense expanse of empathy for its harrowing tragic lead was unveiled. Isaac and the Coen brothers have imparted their character with no shortage flaws, but he should be immensely empathetic for anyone who’s ever attempted to carve out their own place in the overwhelmingly world of music. As Terrence Howard once spit in the rap equivalent, Hustle and Flow: “It’s hard out here for a pimp.” And oddly, in Davis’ case, truer words couldn’t be uttered.