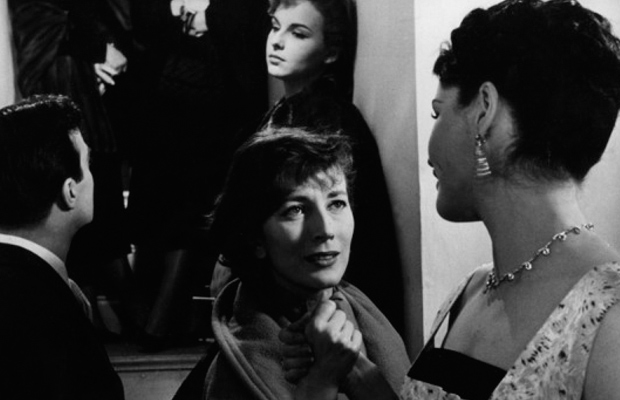 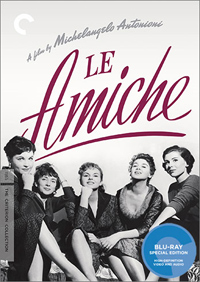 Many forget Michelangelo Antonioni had been directing films for over a decade by the time 1960’s L’avventura was booed at Cannes, eventually solidifying his reputation as one of the most significant auteurs to date. And still, despite a succession of heralded titles following his international breakthrough, little has been said or written concerning the five features preceding it. Criterion restores his 1955 title, Le Amiche (The Girlfriends), a critical juncture for the director as it proves to be an early showcase of the prized themes which would dominate his later, more successful films.

A depiction of five bourgeois women in the upper echelon of 1950s Turin, it’s a rather adept (if sometimes on the nose) depiction of self-imposed alienation amongst those who have everything required to reach the greatest potential of self-actualization. Based on Cesare Pavare’s novella Among Women Only, the film is a thoughtful examination of unrestrainable cultural ennui confined to the most superficial social strata.

The attempted suicide of Rosetta (Madeleine Fischer) unites three of her best friends in concern, including Nene (Valentina Cortese), Mariella (Anna Maria Pancani), and Momina (Yvonne Furneaux). Caught up in the drama is Rosetta’s neighbor, fashion designer Clelia (Eleonora Rossi Drago), who has returned to Turin from Rome to oversee the opening of a new boutique and gets rallied into helping the young woman’s friends discover what caused the overdose of pills. Clelia soon discovers Rosetta’s friends are either too vapid, callous, or obsessed with their own problems to rightly tend to their friend, so she becomes an accidental confidante to the troubled young woman, and offers her a job as a salesgirl in her new salon. It seems Rosetta’s troubles are relating to her unrequited feelings for Lorenzo (Gabriele Ferzetti), who is married to Nene, a talented artist who puts her husband’s professional goals before her own as an attempt to keep his mind on her. Lorenzo had painted Rosetta’s portrait, something which tapped into Rosetta’s emotions unlike anything she’d ever experienced, and upon learning he’s the reason for her suicide attempt, he responds by sweeping her into an illicit affair—something which is immediately apparent to the circle of friends, except Nene. Meanwhile, Clelia begins to develop an attraction to the blue collar foreman overseeing the construction of her salon, while simultaneously attracted and repelled by the superficial, cutthroat socialites she’s fallen in with.

Sort of like the Heathers version of The First Wives Club, Rosetta’s suicide attempt ends up being the absurd catalyst revealing Antonioni’s title to be wickedly facetious. The fate of Cesare Pavese, author of the original text, also lends a significant layer of obscured, inescapable ennui to all this, himself overdosing on sleeping pills in 1950 following a breakup with actress Constance Dowling. It lends a certain morose inevitability to several moments, such as when Rosetta begs Lorenzo to stay with her towards the finale, he admonishes her on the pretense of marriage. “Get married? Then what?” An ill-conceived trip to the beach to revive Rosetta’s mood ends in a considerable spat, playing like a perfect prelude to the fair weather friendships further distilled in L’avventura.

Like one character tellingly advises another in Le Amiche, “You must always pretend,” thus revealing the golden rule in social etiquette, something Clelia clearly violates in a public outburst where she derides the cruel dismissiveness of Momina. Like the Monica Vitti character in L’avventura, Clelia is a working girl of humble means who straddles a chasm between two worlds, having escaped the certain degradation of women who stay in a lower social class, and unable to immerse herself in the numbing apathy of the privileged.

Antonioni, among other things, shows significant improvement in his obvious interests with multiple storylines in Le Amiche. His previous film, I Vinti (The Vanquished) is a rather tiresome triptych of troubled youth stories ripped from the headlines. But Le Amiche proves an interesting stepping stone to Il Grido (another wandering exercise where a man attempts to fill an empty void in his life with meaningless relationships), which would win a prize at the Locarno Film Festival, and pave the auteur’s path to Cannes three years later in 1960.

This new 2K digital restoration arrives with an uncompressed monaural soundtrack, presented in its original aspect ratio of 1.33:1 from the 35mm original camera negative. DP Gianni Di Venanzo’s (who would lens several Fellini and Antonioni titles, including the last two of his Incommunicability Trilogy) frames look significantly remastered, focusing on the women, their fashion, and their spatial relation to one another (Drago, Furneaux and Cortese are particular visual highlights here). Criterion includes several worthwhile extra features on the disc.

David Forgacs & Karen Pinkus:
Scholars David Forgacs and Karen Pinkus recorded this twenty-seven minute 2016 interview with Criterion to discuss themes and visual style in this adaptation from Cesare Pavese’s novella. Pinkus cites the film as avant-garde in its depiction of alienation and flat affect between characters.

Eugenia Paulicelli:
Scholar Eugenia Paulicelli sits for this twenty-two minute 2016 interview with Criterion to discuss the significance of fashion in the films of Antonioni. His relationship to fashion, and its marriage to cinema, is quite key in deliberation of his works, she claims.

Significant observations of alienation in bourgeois tendencies makes revisiting Le Amiche considerably enjoyable, a bridge between not just Antonioni’s later works, but a growing tradition of estrangement and dehumanization in consumer culture touched on by several of his contemporaries (like Pietrangeli’s I Knew Her Well, 1965).