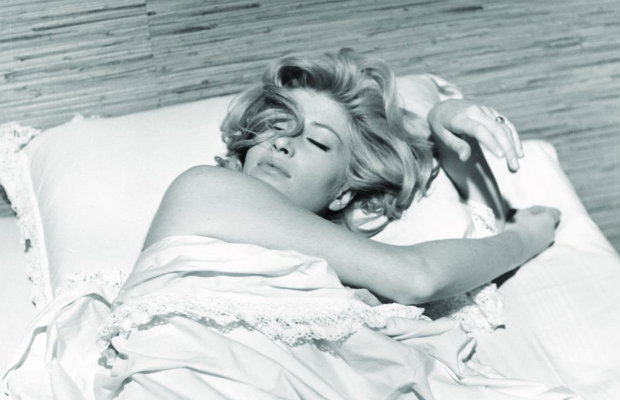 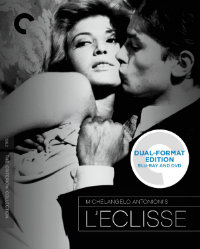 After finally securing 1961’s La Notte as part of the Criterion line-up, we’re treated to a new restoration and Blu-ray transfer of Michelangelo Antonioni’s L’Eclisse, which originally graced the collection back in 2005. The final chapter of the unofficial “Incommunicability Trilogy,” it is, perhaps, the most ‘sex positive’ chapter of the erotomania that partially defines the crumbling of the troubling social orders at hand, and it certainly has a more vibrant energy than the previous films, beginning with 1960’s L’Avventura. As far as narrative goes, however, this may possibly be the most oblique of the three films, meandering through possibilities before delivering a confounding final seven minutes that are as strikingly at odds with the rest of the feature as well as confoundingly, maddeningly riveting.

A beautiful woman, Vittoria (Monica Vitti), tiredly pads back and forth in her lover’s (Fernando Rabal) apartment, a fan providing the insistent noise in what seems an awkward tension. A glance in the mirror shakes her up, and we learn they’ve been up all night talking things over. It seems she no longer wishes to be with him. Leaving the apartment, she returns to her own abode to languish, confiding in a friend who seems unsurprised by the breakup. They entertain a neighbor lady, a colonialist from Kenya, who only wishes to talk about the past life she misses. Upon visiting her mother (Lilla Brignone) at the stock exchange, the disinterested Vittoria runs into a handsome stock broker, Piero (Alain Delon). Eventually, their mutual attraction seems to drift from casual to serious.

In nearly every frame, some obscuring item is playfully displaced, most notably in several sequences outlined by painting or photographs on walls, centered to consume attention yet slowly reveal they are but a small part of a similar yet markedly different ensemble. One of the most hysterical and controversial sequences involves Vitti and a bored neighbor visiting another lonely lady in the same apartment complex, a white colonialist woman who had grown up and longs to return to life in Kenya. Her walls are adorned with artifacts from her past, covered in large portraits of African women. Like bored schoolgirls, the visiting women don blackface and engage in gross imitation of native women, which at first entertains their host. Vitti is completely blacked out, the absence of her whiteness definitively eclipsed during this gross charade. Afterwards, a discussion comparing the native populace of Kenya to monkeys dwindles into Vitti chasing after the escaped black dog of her host, which results in her comically conversing with the animal.

Like a seed blown about by the wind, we watch as Vitti drifts into the frenetic stock exchange, where her mother, a gambling addict, obsessively buys and exchanges stocks. Of course, this introduces Vitti to Delon, who impressively dances through his sequences, unable to ever be at rest. The perpetual seesaw of the stock exchange consumes these people, infecting everything above basic human needs. After one particularly unfortunate crash, Vitti’s mother loses a large sum of money. She can barely think about the prospect of lunch before lapsing into how to regain that day’s losses by pawning her jewelry. Conversely, Vittoria comments to Piero that she is neither bothered with the prospects of poverty nor riches; perhaps the crux of what forces her into an unmoored state of perpetual drift, her continual response to everything being, “I don’t know.”

“I feel like I’m in a foreign country,” Delon’s Piero comments in-between a bout of rather unenthusiastic lovemaking during their muted courtship. Vittoria comments that being with Piero makes her feel like she’s speaking with a foreigner. Ironically, both comments are actually true. Vittoria, a translator (a detail which receives minimal onscreen attention) seems to speak foreign languages better than her own, but perhaps not to communicate (likewise, Antonioni seems to be indicating both here and in La Notte that writers, engaging in a craft of communication via language, are no more adept at human interaction than anyone else).

“Two people shouldn’t know each other too much if they want to fall in love,” she also remarks, a poetic wisdom that marks L’Eclisse as the most romantically inclined of these depictions of malaise. In L’Avventura, the protagonist easily replaces one romantic interest with another while La Notte is a day in the life of a married couple irrevocably at odds due to their boredom with one another—the more you know, the less appealing something or someone is. As we drift away from these two doomed people, we segue into the controversial final sequence. We drift behind a blonde woman, only to find she’s not actually Vitti (something that happens earlier in the film with a woman who changes from blonde to brunette, another possible doppelganger). Several other people crop up, strangers to us, looking paused or lost in their surroundings, juxtaposed with shots of ants busily going about their day and a stream of water that flows. It’s as if nature, as opposed to the mechanized existence of the modern human, has its definite purpose or role that inevitably, without choice, must carry out. Meanwhile, mankind has become paralyzed in a cerebral fog, desperate only to find new ways to be consumed.

Gianni Di Venanzo’s sublime cinematography looks fantastic in this Blu-ray transfer, a series of images that may as well be molting into others before our eyes in an endless cascade. Venanzo returns to work with Antonioni here for the last time after working on Il Grido and La Notte (the DP on L’Avventura, Aldo Scarvarda wouldn’t work with Antonioni again), and was a regular collaborator with Fellini, as well, though his precision works equally well in color as it does in black and white—check out his fantastic work in Elio Petri’s The 10th Victim (1965).

A pair of extra features include a twenty-two minute piece from 2005 titled “Elements of Landscape,” in which film critic Adriano Apra and Antonioni’s friend Carlo di Carlo discuss the majesty of L’Eclisse, which Apra considers the height of innovation in black and white filmmaking. Also, a 2001 documentary, Michelangelo Antonioni: The Eye That Changed Cinema from Sandro Lai is a fascinating hour long exploration if his career. In it, interview footage features a rather broad synopsis of L’Eclisse from the director himself, upon which he concludes the final moments of the film represent an analysis of the feelings he’s been trying to portray since much earlier in his career.

Titles have a particular significance to Antonioni. The original Italian title of L’Avventura is important, which directly translated means ‘adventure.’ Yet, the word also has more subtle ramifications, as it also happens to mean, ‘a fling,’ which compounds the murky layers of its narrative. Likewise, L’Eclisse, is the blatant mechanism Antonioni uses to obscure and confound in this final chapter, which, in comparison, happens to be the most unnerving of this trilogy of miscommunication. Throughout every sequence, both visually and literally, we’re being consumed and overwhelmed by something in the milieu, with often complete obscurations and reductions of both items and performers throughout L’Eclisse. Perhaps the omnipresent twinning or doubling motif throughout the film influenced De Palma to style the exterior apartment of the protagonist in Body Double (1984) to resemble an infrastructure known as “The Mushroom” which we see early on here. We’re immediately given a double pair of love interests for Vittoria, who abandons the first, a writer (Francisco Rabal), and rather casually drifts into another situation with Piero (Delon), a manically inclined stockbroker. The presence of French actor Delon is intriguing, like Jeanne Moreau in La Notte (whose character is married to an uninspired writer), having to be dubbed in Italian—his performance virtually masked by the intonations of some unnamed man.