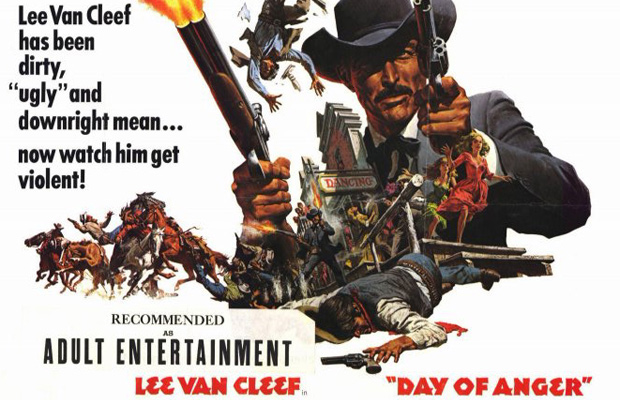 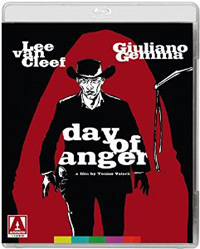 In the enduring, boundless shadow of Sergio Leone’s legacy, a deluge of neglected and forgotten Italian genre titles languish undeservedly, ready for rediscovery. Arrow Video has dusted off a masterful example long overdue, Tonino Valerii’s 1967 sophomore feature, Day of Anger (aka Gunlaw). Valerii worked as Leone’s assistant on A Fistful of Dollars and For a Few Dollars More before launching his own directorial career, re-fashioning the villainous energy of Lee Van Cleef in the actor’s effort to break out on his own. Scripted by Italian genre regular Ernesto Gastaldi (who worked with many masters of giallo film, including Mario Bava, and Sergio Martino), the overtly familiar narrative does little to hamper the enjoyable performances of Van Cleef and Giuliano Gemma, replete with several memorable action sequences and set pieces that assist in elevating the title to its deserved reputation.

Lowly street cleaner Scott Mary (Giuliano Gemma) is bullied by the people of the small town of Clifton. A bastard whose mother was a prostitute in Vivien Skill’s (Yvonne Sanson) prized institution, Scott grew up without a father figure, though Murph (Walter Rilla), who works in the stables with the young man, tends to look out for him. When a legendary gunslinger comes to town, Frank Talby (Lee Van Cleef), Scott gains the fighter’s attention and trust, begging to be taught how to handle a gun. But soon, it seems Scott’s skills might surpass that of his master.

Day of Anger unfolds with the inevitable, inescapable exactness of a Greek tragedy, which has led several critics to point out the film’s rather Oedipal leaning concerning a confused youth’s attempts to destroy his dueling father figures to emerge triumphant as his own man. As the aging gunslinger Talby, Van Cleef revels in the spotlight, an avenging angel that uses his young protégé until he realizes he can longer control him. Leone’s Man with No Name Trilogy launched more than just Clint Eastwood’s career, but Van Cleef stayed on in Italy to work on a string of Spaghetti Westerns that never saw the same kind of attention. While Day of Anger followed Leone’s final installment, The Good, the Bad, and the Ugly (1966), Van Cleef simultaneously headlined his own trio of titles, including The Big Gundown and Death Rides a Horse and Day of Anger. But if Valerii capitalized on Van Cleef’s current notoriety, his Day of Anger also served as breakout performance for Italian star Giuliano Gemma, who would go on to be a genre staple. His Scott Mary, the abused son of a prostitute, fashioned into the town pariah, graduates magically into a top tier gunslinger, and much like a succession of protagonists since, learns the hard way that his powers must be used for good.

Arrow has put a lot of effort into this restoration, going so far as to include three versions of the film, including the truncated version that was released theatrically in the United States. The best version is the Italian theatrical cut, which runs nearly half an hour longer. Restored from the original Techniscope negative, the 2.35:1 aspect ratio looks optimal. Three interviews and a deleted scene are available on the multiple discs.

Tonino Valerii Interview:
About eleven minutes of footage from 2008 finds Valerii speaking about the origins of Day of Anger.

Ernesto Gastaldi Interview:
Screenwriter (and eventual director) Ernesto Gastaldi speaks of his frequent collaborations with Tonino Valerii, and how Day of Anger marked the beginning of a lucrative Western career for many involved.

Paired with Riz Ortolani’s snazzy score, Enzo Serafin’s (a DoP that worked with Antonioni and Rossellini) cinematography captures a magnificent mise-en-scene, and Day of Anger feels excitingly energetic despite its rather commonplace narrative. Unlike Leone, Valerii seems less inclined toward a sweaty, epic flair, so much less time is spent on the sort of close-ups his mentor tended to favor. Women are also used more flagrantly by Valerii, including a revolving number of distracting prostitutes (including one incredibly awful lip-synching chanteuse), but he also manages a handful of impressive sequences, including a rifle duel on horseback that plays like an old jousting competition. As Gemma finds himself pinned between the opposing forced of Wolf Rilla and Lee Van Cleef, the grand showdown doesn’t quite live up to some of the film’s earlier, more energetic moments. But there’s a delirious, strange beauty to the grizzled, anti-gun Rilla as he faces off with Van Cleef, stationed on the porch of his brand new saloon guarded by the large pistol sculptures looming like gargoyles to his private temple.