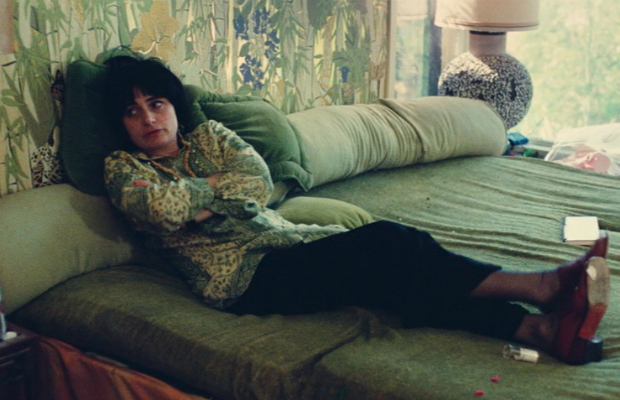 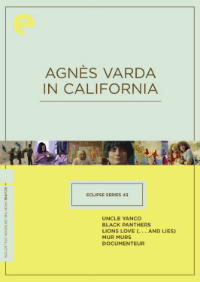 In the wake of the wild success of Jacques Demy’s The Umbrellas of Cherbourg, the idiosyncratic French filmmaker was lured by Hollywood move to southern California to produce what would become Model Shop. With his wife and fellow cinematic genius Agnès Varda in tow, they moved to Los Angeles in 1967 where Varda would dive headlong into a series of expressively free form personal projects that would be begin with an adventure North to Sausalito where she would meet a distant relative and the subject of her first film included in Criterion’s wonderful new Agnès Varda in California Eclipse set, Uncle Yanco.

Fitting right in line with the personal essay films that would become somewhat of a signature in her late period output with works like The Gleaners and I and The Beaches of Agnès, Uncle Yanco is an invigorating sun-kissed introduction to the progressive, hippy lifestyle that her instantly beloved mixed media artist uncle Jean Varda so embraced. She appears before the camera and in voiceover, smitten with cultural curiosity and a playful sense of recreation, asking her newly introduced relative to reenact their initial meeting through multicolored heart-shaped gels. Gliding around his makeshift floating commune and cutting to various characters invited to participate in the film while pinned with buttons exclaiming “VIVA VARDA”, this brief intro into Varda’s California is a vibrant, loving portrait of community, artistry and what it means to be family, by blood or not.

Her next film would be more remote, more socially conscious and the first of her work to approach the racial divide in America face to face. Originally funded by a French television network that ended up shelving the project in the wake of the political outrage that took place in France throughout May 1968, Black Panthers documents a series of demonstrations held by the revolutionary African American socialist organization held in Oakland. An unidentified English speaking female narrator explains: Huey P. Newton, one of the founding members of the party, had been arrested, imprisoned for the murder of a police office at a road side driver’s license check (though no weapon and was ever found) and was awaiting trial. Varda and her crew sympathetically witnessed a series of white hot speeches and the objectively blind refrain that Huey needed to be freed immediately without trial. She even somehow manages to glean an interview with Newton himself, still behind bars at the time. As a historical record, the film is an important pivot point in our cultural heritage and a key developmental moment in Varda’s artistic moral fiber, but this is the filmmaker locked in creative stasis, stifled by format.

After a failed courtship by the studios (they refused to give her final cut), Varda embarked on what would become Lions Love (…And Lies), a wildly personal film wholly free of traditional form or administrative oversight. Inserting director Shirley Clarke as a self-surrogate female filmmaker rejected by the Hollywood system who bunks up with a trio of burned out hippies (played by Warhol regular, Viva, and the pair behind Hair, James Rado and Gerome Ragni) who do little more than lounge about in their sun-soaked home in the hills. Between formally playful interludes that elide Hollywood history with the shattering news of Robert Kennedy’s killing (which actually took place during the film’s shoot), Varda calls into question the historical record keeping of movie-making and its inevitable mucking up of the truth by allowing the making of the film itself to occasionally bubble to the surface in fleeting moments of actors becoming self aware of the shoot or Varda herself appearing on screen while cinematic ghosts haunt Hollywood in the form of street signs, tourist attractions and good old fashioned cinephilia. If Black Panthers was an attempt at traditional observational documentation, Lions Love (…And Lies) is Varda feeling the need to take part, inserting herself into the counter-culture that’s surrounding her while blending and overlapping forms like her Uncle Yanco, happy.

The final two films included in this collection were shot over a decade later after moved back to France during the 70s and having returned to Venice Beach for yet another studio project to fall through. Out of pure frustration, Varda produced a stunning essay on the cultural and artistic diversity of Los Angeles through the intrinsically rich starting point of street art in Mur Murs. Beautifully rendered murals pay tribute to loved ones since passed and unloved city architecture constantly in flux, destined for decay, just like the gorgeous weather-worn artworks themselves. Alternately, Documenteur, though not a documentary, is the artistic processing of Varda’s life at the time. Temporarily separated from Demy and single parenting on the Californian coast without solid work, Varda transferred her anxieties to the screen with an emotionally complex, narratively subtle portrait of hard times with the help of actress Sabine Mamou (who also served as editor on Mur Murs) and her own adolescent son, Mathieu.

As is the norm for Criterion’s stripped down Eclipse series, this three disc set contains no extras outside of the insightful liner notes written by Michael Koresky that line the inside of each case. The films themselves, recently restored thanks to The Annenberg Foundation, The Film Foundation and The Los Angeles County Museum of Art Fund, look outstanding, with plenty of natural grain and that lovely California sunshine color palette baked into every shot. The films each come standard with original mono tracks that sound just about as good as they’re bound to be (except maybe if they were to have received Blu-ray releases).

Everyone could use a little more Agnès Varda in their life. As with all her films, watching is to be reinvigorated, our curiousity about the world reignited. Her creative energy is contagious and her need to stake her own feminist claim in a world dominated by males is courageous. Criterion’s new Eclipse set makes me want to join the floating commune overseen by Uncle Yanco so I can don those same pins and shout to world: VIVA VARDA!