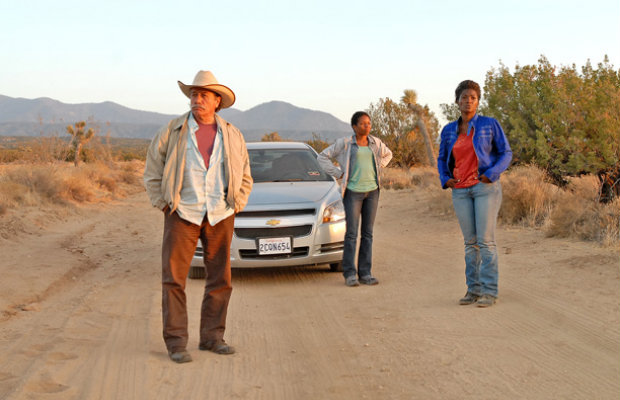 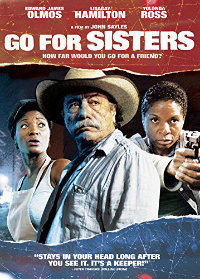 John Sayles’ latest film, Go For Sisters, receives an unceremonious DVD release from Freestyle Digital Media. While it snagged Yolonda Ross a supporting Actress at the Independent Spirit Awards after a muted theatrical release, it seems there will be less ado championing the home viewing release. Denied a Blu-ray option, Edward James Olmos still takes top billing even though the film belongs to actresses Ross and LisaGay Hamilton. Despite the continuation of this maligned marketing, with a little luck, Sayles’ best film in years will hopefully reach the broader audience it deserves.

An independent filmmaker who has been directing films without studio backing since 1979, infamously securing financing through penning genre screenplays (Piranha; Alligator). As such, one can often look forward to the offbeat flavor of his work, a true master of developing the unexpected in relationships between people, often crafted against delirious narratives that are sometimes labyrinthine in scope and undaunted by mainstream expectations of running time restraints. While not every film is a success (his last feature, 2009’s Amigo was one of the few that saw Sayles unable to successfully overcome his budgetary constraints), he’s back with a breath of fresh, effervescent air with Go For Sisters, a character study lodged in a dime store immigration thriller where nothing seems very simple if you take the time to look twice.

We meet Bernice (Lisa Gay Hamilton), a controlling and unyielding probation officer as she listens to a client relate an overcomplicated explanation for why she violated her parole. Firmly, Bernice applies logic to her decision, coldly confirming that, in her world, the law is black and white. She commiserates with a white co-worker about how the law protects the “welfare of the public” keeping the “normal” people, of which they are representative, “safe.” Receiving some agitated phone calls, we learn Bernice has been unable to get in touch with her son Rodney for some time. To make matters worse, she learns during lunch time that her public defender boyfriend Dez (Mahershala Ali) has decided to get back together with his wife. Then, after lunch, Bernice meets Fontayne (Yolanda Ross), a case recently dumped into her lap. Fontayne has violated her parole by fraternizing with an ex-convict. But before she can explain herself, Bernice recognizes her as an old high-school friend. Determined to pass the case off to someone else, a sincere plea from Fontayne moves her to pity, and Bernice gives her a break. The next day, Bernice discovers that her son is a prime suspect in the brutal homicide of a drug trafficker. Desperate to track down her son, who seems to have disappeared, Bernice goes to Fontayne for help, which leads them to the services of Freddy Suarez (Edward James Olmos), an ex-police detective suffering from macular degeneration. Their findings quickly take them from the seedy underbelly of Los Angeles to the other side of the border, as Bernice discovers more and more surprising detail about her son.

Featuring three incredibly captivating performances, Sayles is in top form doing what he does best, spinning rich dialogue as he develops nuanced characters. What makes Go For Sisters especially enriching is how he manages to craft even the briefest supporting turns into plausible, captivating characters that all have their own goals, worries, and stories to tell. With an array of notable faces fleshing out his bit roles, including Isaiah Washington, Mahershala Ali, Harold Perrineau, and Hector Elizondo, masculine figures take a back seat to the powerfully effective duo of Hamilton and Yolanda Ross.

Representatives of the right and wrong side of the track, their developing relationship clearly reveals that neither people nor their situations are clearly black and white. As high-school friends, one of several conversations concerning their past reveals that back in the day, they could ‘go for sisters.’ Of course, the pregnant silence that trails them as they search for Rodney now begs to differ. The film hits high gear when the droll Olmos turns up and sees the trio head to Tijuana and Mexicali.

As entertaining as Olmos is (he gets top billing on the poster, which is unnecessary), Hamilton is superb as a fiercely determined mother willing to tarnish her personal values to save her son. But her thunder is frequently stolen by Ross’s weary, hardened turn as Fontayne, whose story is revealed in several asides, some of which constitute as the most emotionally effective moments in the film, including a brief visit to Chula (Vanessa Martinez), with whom she had shared a relationship with while in lockup. “That time felt like a dream,” she says quietly while Bernice and Suarez are distracted in the car. “More like a nightmare,” says Chula, pushing a stroller inside the home she now shares with her husband. “It was a dream for me,” Fontayne replies.

It’s hard to imagine a more barefaced package for Go For Sisters, plopped into the standard 5.1 Surround Sound and with the common 1.85 Academy Flat Ratio. While this is certainly serviceable, Freestyle really doesn’t seem to have put any enthusiasm into this. Likewise, it tries to pass off Spanish subtitles and trailers as Special Features. True, it does have a commentary option with director John Sayles, but that’s an absolute minimum.

Sensational aspects of the narrative aside, seeing two black women headline a film in American cinema, whether it be independent or mainstream, seems to be an infrequent enterprise. Ross and Hamilton are captivating, and you’ll come away from Go For Sisters in awe of them and thrilled because you’ll have discovered a film that resoundingly fails to adhere to formula or stereotype. One of the many wonderful aspects of Sayles’ body of work is his habit of diversity, featuring characters and themes unabashedly and humanistically concerning race and sexuality. And all these years later, Go For Sisters is proof he’s still writing and directing films that are smart, idiosyncratic, and powerfully engaging.