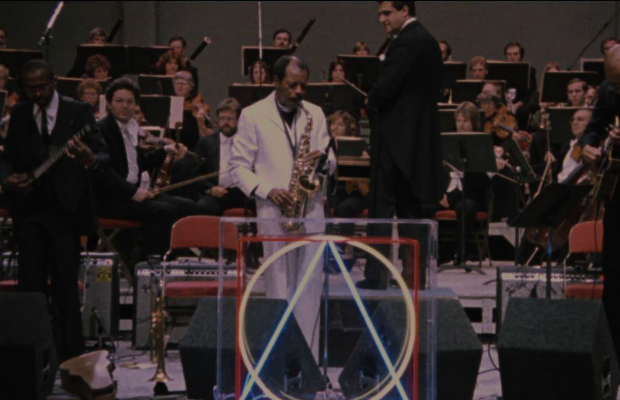 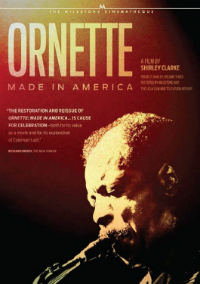 Shirley Clarke’s final feature film emulates the free form style of its subject, legendary jazz musician Ornette Coleman, playfully editing fragments of live performances, interviews and fictionalized visions of the saxophonist’s upbringing with the fervent energy of early MTV music videos. The result is a sort of telegenic collage that allows Ornette to age and mature in stature over the course of decades through performative observation and on screen accolades from colleagues and critics alike. Yet, Coleman’s career has continued to grow and flourish since the release of Ornette: Made in America back in 1985, having even been awarded the 2007 Pulitzer Prize for music for his record Sound Grammar.

From the opening of the film Ornette’s seen being honored, in this case by the mayor of his hometown, Fort Worth, Texas, with a key to the city. It’s a recurring theme. Though at first misunderstood in his local musical community, the man is now a living legend, having coined the genre of free jazz itself, toured the globe and played with some of the biggest names in music. Writers like New York Times jazz critic John Rockwell and Smithsonian jazz critic Martin Williams hail the saxophonist to camera for his exploratory spirit, his adoption of third world sounds and unheralded ability to play the blues when the mood strikes him, though Clarke never allows these comments to just play straight, instead opting to animate them as though playing through a technicolor television with complimentary scrolling marquee to introduce each of her on screen players.

Clarke’s experimentalism extends far beyond spicing up interviews to impressionistic fast cuts that massage the exploratory qualities of Coleman’s performances to traverse lucid memories of his childhood and employ digital video effects that unfortunately ground the film firmly in the 80s. Some segments in which crude green screen effects are grossly overplayed, Ornette’s figure is seen pasted into scenes of early space missions that would surely fit right in with the ever growing internet wasteland of memes and animated GIFs.

Where the film works best is when Clarke takes care to highlight the relationship between Ornette and his son, Denardo. Early on we witness the boy being given some musical advice by his father, followed by the pair in full on jam session mode. Moments later, Denardo is a full grown man seated behind his kit, now a righteous jazz musician in own right. Grounded firmly in the free spirited morals that their music professes, their relationship is one of respect and compassion. You can see it in the way they speak of one another, speak to each other and most of all, how they play with one another.

At one point, Ornette and Denardo take part in a performance conceived by Shirley’s own daughter Wendy Clarke, the performance, titled “The Link”, which saw the father and son duo simultaneously playing from differing locales through some early form of satellite syncing. Now unfairly colored by a sobering overtone, Ornette and Denardo synchronously perform from the World Trade Center and the Adam Clayton Powell Center in Harlem, spanning time and space by way of imaginative technology and their own creative musical whim. It is this creative spirit that Ornette: Made in America so passionately celebrates and hopes to see passed down from one free thinking generation to the next through free jazz, video art and a collaborative impartiality that sees the likes of imaginative minds the world over, from Williams Burroughs to tuxedoed symphony orchestras, to come together and make art in all its wonderfully weird forms.

Part three of Milestone’s four part Shirley Clarke Project, which sees a handful of her films lovingly restored and presented in HD, this release looks and sounds wonderful, though the picture is strangely window-boxed just a tad. The film was shot in widescreen, though there is about an inch of black space running along the top and bottom of the screen, and about two on either side of the screen. Other than than, the picture looks cleaned up and crisp with great grain structure in tact. Almost more importantly, the robust stereo track pumps out performance after performance with wonderful clarity. The disc itself comes packaged in a standard Blu-ray case.

Shirley Loves Felix
A bizarro short in which Clarke, bearing a Felix mask, is overlayed with Felix the Cat cartoons and comments on the happenings on screen, followed by another Felix cartoon by Pat Sullivan titled “Out of Luck” with a lovely jazz soundtrack. 5 min

The Link Revisited
A thorough Skype conversation with Denardo Coleman on how Clarke got involved with her father, what happened with all the footage she shot while he was growing up, how he became a drummer and how performance “The Link” came about. 32 min

An Interview with Shirley Clarke
Conducted on May 24th, 1982 in Studio One at UCLA by Joyce Wexler-Ballard, this interview begins with awkward theories about interviews in general and moves into her experiences with therapy, her parents, her Felix button, and much, much more. Fairly informal, it really shows her blunt honesty and natural humor. 59 min

Ornette Trailers
The first, a full length trailer features William Burroughs reading a piece overtop of Ornette and his band playing, while the other, a shorter one, sees the same performance with a different quote from Ornette himself. 2 min

Shirley Clarke on Ornette: Radio Interview
Interviewed by KPFK’s Mario Casetta back in 1986 shortly after the film’s release, this conversation goes into the origins of the film project and Clarke’s relationship with Coleman. 29 min

Booklet
Just a fold out leaflet really, it features a reflective essay by producer and director Kathelin Hoffman Gray, along with a photo of her and Coleman.

Nearly as free in its storytelling as Ornette and his son’s exploratory musical compositions, Ornette: Made in America is a mix of experimental biography, performance documentation and the story of father’s relationship with his son across decades of musical pursuit. There are occasional faults in the foundation of Clarke’s film, but for the most part her vision is one of complimentary jubilance for a man she dearly admires for his creativity and moral standing.