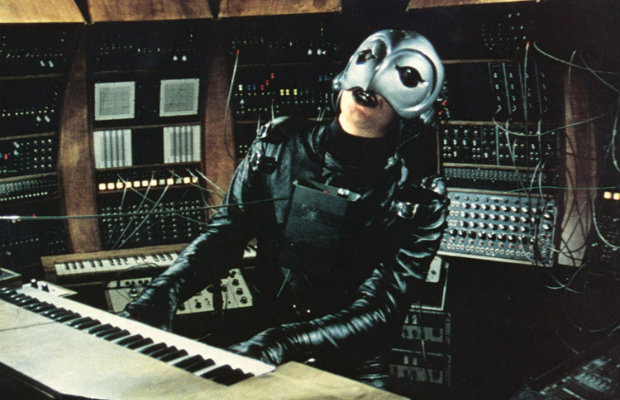 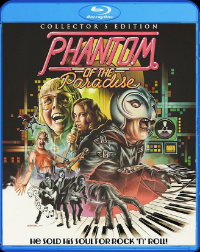 Just in time for its 40th year anniversary, Shout Factory has amassed a glorious Blu-ray remastering of Brian De Palma’s 1974 classic, Phantom of the Paradise. A glam-rock musical that’s enjoyed a sizeable cult following after an initial muted theatrical release, it represents the filmmaker’s most enjoyable attempt at comedy in this vintage satire about consumerism vs. creative control.

On the eve of unveiling his glam rock palace The Paradise, cutthroat music mogul Swan is struggling with how to open with just the right song to be performed by doo-wop group the Juicy Fruits (modeled after Sha Na Na). When Swan hears the music of aspiring singer songwriter Winslow Leach (William Finely, a De Palma regular), he decides he wants his music, an epic cantata modernizing Faust, but not the man. After his tunes are stolen, the songwriter tries to barge his way into Swan’s rehearsals but is thrown out, thugs planting drugs on the naive man, which sees him locked up in prison where his teeth are routinely removed and replaced with garish metal caps. Losing his mind upon hearing that the Juicy Fruits will be performing his music, Leach breaks out of prison and maims himself in a record press in Swan’s lair. Donning a bird mask, he aims to haunt the Paradise, beginning by blowing up the Juicy Fruits during rehearsal, forcing Swan to consider working with the disfigured Phantom. The maleficent trickster, who has already made a pact with the devil, convinces Leach to sign a contract in blood. But Leach rewrites the cantata for muse Phoenix (Jessica Harper), something Swan just does not want. Steadily drugging Phantom, Swan prepares to open the Paradise with glam rocker Beef (Gerrit Graham), which Leach is none too happy about when he comes to his senses.

Like nearly all of De Palma’s early works, his inspiration and homage to classical literature and favored auteurs is evident throughout Phantom, most obviously as an updated The Phantom of the Opera tale spliced with Faust. But there’s much more going on here, with tangential asides into The Picture of Dorian Gray and the heavily borrowed bird motif that also dominates Hitchcock’s Psycho (1960).

While it’s not quite the pioneering originator that would prophesize today’s obsession with reality television, it’s an early novelty work clearly grappling with the cannibalizing intersection of art and commerce, using it’s glossy veneer to usher in its more subversive criticisms of an industry dedicated solely to profit. By now, much of these once innovative statements tend to seem overly familiar, and thus Phantom, which was De Palma’s follow-up to Sisters (1972), now seems like an open template of themes and techniques the director would obsessively and aggressively become renowned for in later, more famous titles. It’s hard not to see the rather comical shower sequence between Gerrit Graham and William Finley as a direct precursor to Dressed to Kill, along with a series of other instances that would be recycled later on.

On its own, Phantom of the Paradise is as breathlessly silly as it is enticing, filled with a cavalcade of memorable characters, though the film is dominated by the delirious strangeness of Finley’s phantom and Williams’ creepy little record mogul. “You know how I abhor perfection in anything but myself,” Williams huffs from under his feathered mop (a performance that has Phil Spector emblazoned all over it).

One of the film’s best sequences has him filtering the broken caw of Finley’s voice into a perfect intonation…that is, in fact, Williams. If anything, one wishes that there could only have been more room for the strange and intoxicating performance from Gerrit Graham as the flamboyant glam rocker. The film is Jessica Harper’s debut, an actress perhaps most well known for her role in Dario Argento’s Suspiria (1977). Here she’s a serviceable ingénue, though she pales in comparison to the monstrous men surrounding her. Her singing voice dubbed by Betty Buckley (who would later famously portray the kindly gym teacher in Carrie), Harper seems like an interesting mix of Barbara Hershey and Brooke Adams of that same period. Of course, it’s most widely celebrated sequence involves a ticking time bomb in a prop car modeled after the famed opening of Orson Welles’ Touch of Evil (1957).

The Shout Factory’s package includes both a Blu-ray and DVD disc, but obviously the Blu-ray, which features high definition widescreen, is the way to experience the title. Both discs, however, are stuffed with different special features, a smorgasbord of extras for the diehard fans, including lots and lots of recent interviews, as well as audio commentary from Jessica Harper, Gerrit Graham, Archie Hahn, Peter Elbling, and Jeffrey Comanor.

New Brian De Palma Interview
A thirty minute interview with De Palma reveals his influences in creating Phantom of the Paradise, including A Cool Million by Nathanael West, as well as various odes to several others films, particularly The Cabinet of Dr. Caligari in the set design of a Kiss inspired reconstitution of Leach’s music in the film. De Palma expresses his respect for Welles in the creation of the famed homage to Touch of Evil.

New Paul Williams Interview
A thirty minute with Paul Williams reveals how he became involved with the project, writing the songs while he performed as opener for Raquel Welch. Williams, like De Palma, credits Phantom as one of the first films to explore the possibilities of reality television and entertainment. Other tidbits, such as how Led Zepplin’s manager forced them to make severe last minute changes concerning the name of Swan’s corporation in the film in order to avoid a lawsuit is interesting. Discussion of how the film was only initially well received in Winnipeg and Paris is also a compelling topic.

Paradise Regained: Making of Documentary
A fifty minute documentary about the making of the film proves to be the most entertaining and fascinating extra, with a multitude of interviews from cast and crew concerning the rather confusing merry-go-round of casting assignments. William Finley, who died in 2012, is also included here.

Interview with Costume Designer Rosanna Norton
A ten minute interview from 2004 with costumer designer Rosanna Norton was filmed on a handheld camera. She shares her admiration and pleasant memories of the production, and goes into depth on her design of the Phantom’s costume and mask.

Biography Phantom of the Paradise
Gerrit Graham reads the 1974 publicity sheet he wrote for the film and discusses his experiences as a rock critic.

Alvin’s Art & Technique
Andrea Alvin discusses her design of the Phantom of the Paradise poster.

It’s easy to forget that Phantom of the Paradise was nominated for Best Original Song, Score, and Adaptation amidst its glorious, flashy weirdness. Less sexually transgressive than the similarly outrageous The Rocky Horror Picture Show, De Palma’s Phantom is perhaps the most inventive take on Faust ever realized and smartly inserts its subversive critique of a soulless industry. Best of all, it’s an exciting discovery for those who’ve yet to encounter De Palma’s (successful) lighter side.