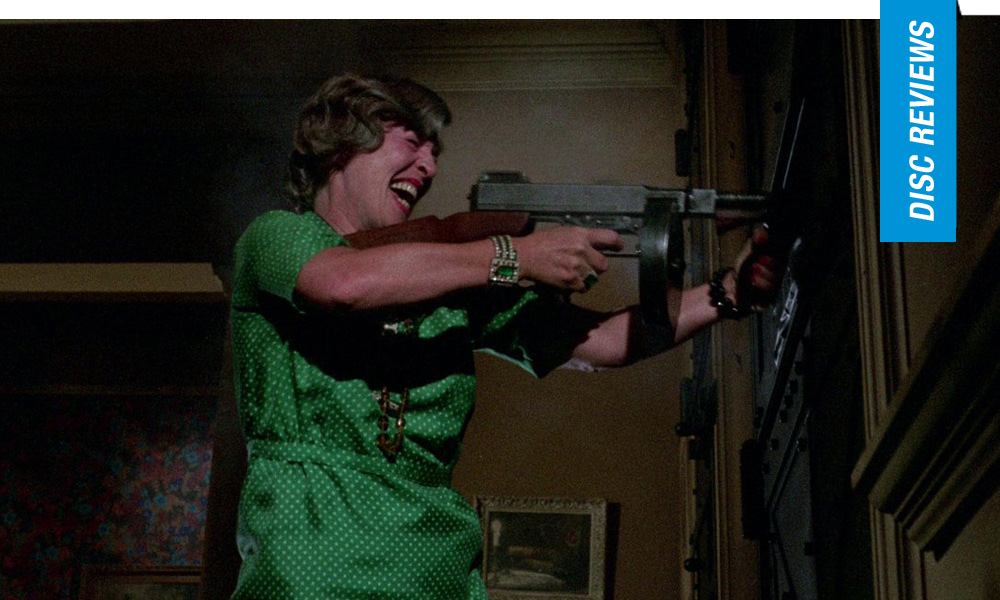 And the final nail in the coffin of Aldrich Studios was 1971’s The Grissom Gang, an adaptation of famed UK noir writer James Hadley Chase’s No Orchids for Miss Blandish (which was previously made into a film in 1948, also recently re-released by Kino Lorber). The film is an underrated gangster classic, which takes St. John Legh Clowes’ original film and brings it into the sweaty forefront of the New American Cinema style. Strong performances and the heightened psychosexual undertones of the novel’s text makes this a much grittier example of the Lima Syndrome which is at the crux of the film’s narrative.

Barbara Blandish (Kim Darby) is a wealthy socialite who finds herself kidnapped by a deadly gang of outlaws known as The Grissom Gang and held for ransom. The streetwise Ma Grissom (Irene Dailey), however, knows most kidnappings end tragically for the perpetrators, so she devises a plot with the gang, including son Slim (Scott Wilson) and Eddie Hagan (Tony Musante), to kill the girl once they receive the money rather than risk capture by handing her over. Unfortunately, no one can account for the immediate liking Slim takes to Barbara, who desires to keep her as his indentured sex servant. Meanwhile, Barbara’s father pays the ransom and soon the police begin to close in on the notorious gang.

Leon Griffiths adapts for Aldrich, and Kim Darby headlines with one of her most psychologically complex performances, following on the heels of her dual 1969 breakout hits, which included True Grit and her Golden Globe nominate performance in George Schaefer’s Generation. A clutch of noted character actors are in top form, including Tony Musante. But its Scott Wilson as the simpleminded Slim Grissom and an awesomely hard-edged Irene Dailey as Ma Grissom who really stand out, particularly in an early sequence whereby the imperiled Miss Blandish finds herself beaten into sexual submission by the imperious matriarch who demands she provide sexual gratification for her son. The film’s subplot involves the other notable cast member, Connie Stevens, as a show girl hungry for fame and fortune but used by the police to penetrate the Grissom gang through her relations with Musante’s Eddie Hagan.

Aldrich may dial up the material’s luridness, but there’s a palpable empathy to be had for Miss Blandish and Slim Grissom wholly absent from the first adaptation. Rejected by her father (a formidable Wesley Addy as the cold-hearted John P. Blandish), Darby’s distress and despair in the film’s final sequence brings The Grissom Gang unexpected emotional nuance. Had audiences revered the film for the well-crafted cinema it is, one only wonders what Aldrich would have gone on to create had he not been forced into director-for-hire status after its release (though the rest of the 1970s would find him directing similarly underrated items like Emperor of the North, the well-received Burt Reynolds sports comedy The Longest Yard, and even the pulpy Joseph Wambaugh adaptation of The Choirboys).

Kino Lorber presents a brand-new HD Master from a 4K scan of the title, presented in 1.85:1. Picture and sound quality are well-attenuated, highlighting the work of Aldrich’s usual DP, Joseph Biroc. Included as part of Kino Lorber’s Studio Classics, an audio commentary track by film historians Howard S. Berger, Steve Mitchell and Nathaniel Thompson is included along with an interview with Scott Wilson.

Scott Wilson:
Actor Scott Wilson is on hand for a new fourteen-minute interview, who describes the difficulty he experienced being typecast after 1967’s In Cold Blood, and the opportunity of being able to portray something more multi-faceted in The Grissom Gang (he describes Aldrich as a man who had the pleasure of always being the last to leave the set).