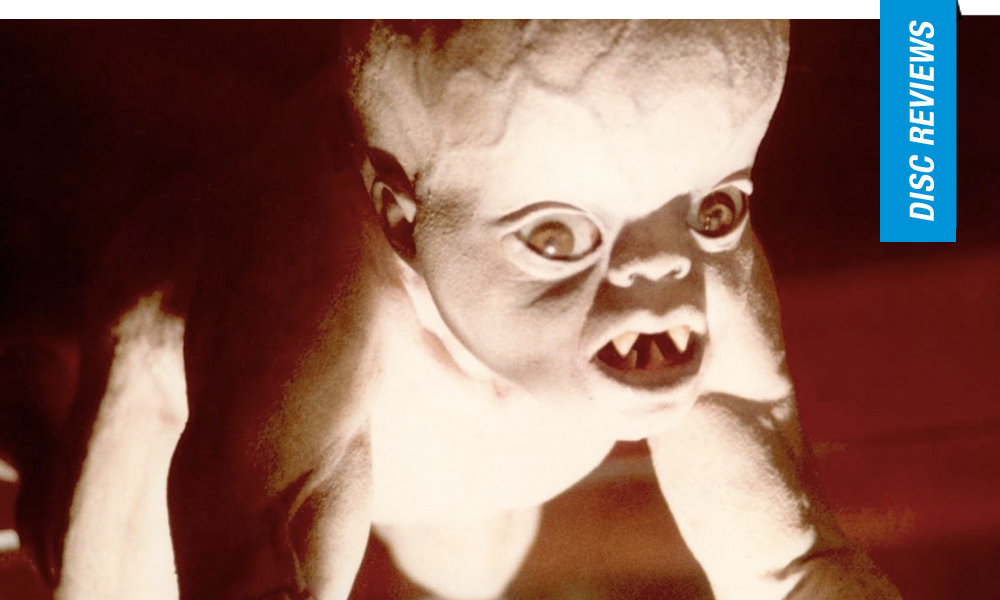 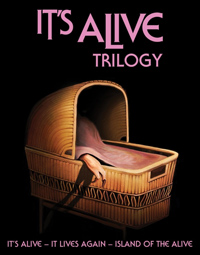 As far as devious killer babies go, Larry Cohen’s seminal It’s Alive trilogy is, alongside Roman Polanski’s Rosemary’s Baby (1969), a cornerstone of the subgenre. Playing on heteronormative fears lodged in the white, affluent suburban sprawl of early 1970s Los Angeles, Cohen molds ripe subtexts into a first installment which could be most logically characterized as an environmental horror film. A baby basinet with a monstrous claw protruding from it is poised underneath the fantastically domineering, all-caps tagline, “There’s only one thing wrong with the Davis baby…It’s Alive,” and would mark Cohen’s break from the Blaxploitation genre (which consisted of Bone, Black Caesar, and its sequel Hell Over Harlem) and usher forth a formidable, unforgettable resume of B-genre films through the 1970s and 80s.

There’s actually more than one thing wrong with the Davis baby, as is eventually evidenced by our brief flashes of the murderous infant who goes on a killing spree as it navigates the Los Angeles sewer system, making a bee-line for his older sibling’s school not unlike a later narrative trajectory conjured by John Carpenter for his Michael Myers in 1978’s Halloween. Clawing his way out of his mother Lenore (Sharon Farrell, who should have been given the opportunity to play Ann-Margret’s sister) and killing all the attending hospital staff, It’s Alive goes from foreboding conversations about pollution to full tilt nightmare rather quickly. We get scant little time with the Davis family prior to the arrival of their little bundle of death, but it’s enough to establish John P. Ryan as an uncomfortable bastion of post-WWII masculine posturing, his performance echoing someone like a George C. Scott.

The remainder of Cohen’s first entry in the series is a veritable chase film as authorities try to figure just what it is they’re looking for while the Davis family argues for a semblance of humanity in the detainment of their baby (which includes Cohen favorite James Dixon as Lt. Perkins, who appears across all three titles, and Andrew Duggan as the sympathetic Dr. Perry). One of the most prominent elements remains a late-career entry for singular composer Bernard Herrmann in what has become one of several notable cult items from the Hitchcock-De Palm alum.

Four years later, Cohen would resurrect his killer babies in It Lives Again, in which John P. Ryan returns, this time as the bearer of bad news when he shows up unannounced at a baby shower for Jody and Eugene Scott (Kathleen Lloyd and Frederic Forrest) in their Tucson, Arizona home. Officials have been monitoring the Scott family because they know Jody is about to give birth to one of the monster babies, as several have been born and routinely exterminated across the United States by Mr., Mallory (John Marley, the famed character actor known for Love Story and John Cassavetes’ Faces) and his crew of government elitists. Frank Davis has affiliated himself with an opposition group trying to save the babies, headed by Duggan’s returning Dr. Perry, Dr. Da Silva (Bobby Ramsen), and Dr. Forest (Eddie Constantine). The Scotts are leery of Frank Davis and his crew of scientists, who believe the babies are an advanced evolutionary stage for humanity and currently are observing two other mutant babies on their possession. However, when the Scott baby kills a scientist and breaks free of its facility, the Scotts find themselves being used as bait for the authorities who believe the parents can be used as a homing beacon for the loosed killers.

While It Lives Again features a more notable cast including Frederic Forrest on the eve of his Oscar nod for 1979’s The Rose (and already a prominent actor thanks to Francis Ford Coppola), the grizzled John Marley (a bit too grizzled for the purpose he’s used for here, revealed in the third act), and Eddie Constantine, the energy level of the first sequel hovers around the monotonous formula hobbling many sequels, throwing more of what it thinks the audience wants (killer babies) but actually delivering much less. Cohen’s originating subtexts take a back seat to killing sprees and secretive governmental and scientific agencies, neither seeming clearly defined.

Nearly a decade after the second film, Cohen would embark on It’s Alive III: Island of the Alive, which was part of a two-picture deal he would sign (along with A Return to Salem’s Lot the same year) which were meant for television. Cohen, working once again with his Q: The Winged Serpent lead Michael Moriarty (who is also in his Salem’s Lot sequel), fashions something more along the lines of a black comedy, which finds the US court system (MacDonald Carey, in his last screen appearance as an empathetic judge) has banished all of the monster babies to a remote island thanks to the intervention of Moriarty’s Stephen Jarvis, fighting for the survival of his son.

Of course, all those on the expedition except Moriarty are brutally slaughtered, with the now-five-year old mutant toddlers (who have already been propagating amongst themselves, meaning Moriarty is, in effect, a grandpa) commandeering the ship and setting a course for home, which happens to be Florida. Moriarty gets stranded in Cuba briefly, and then reunites with Ellen to save their murderous, telepathic son’s grandchild from being exterminated. Cohen is arguably using social commentary about victims of the AIDS crisis here considering the timing, but awkward tonal shifts (the Cuba bit is especially tiresome) and increasingly cheap special effects (the toddler version of the monsters are featured a bit too frequently considering their unsatisfactory costume designs) make Island of the Alive a bit of trashy, forgettable (if fun) fare instead of the social commentary it might have been. Still, Moriarty is one of Cohen’s worst male leads (bested only in this regard by Adam Arkin in Cohen’s risible attempt at comedy, 1981’s Full Moon High), and he’s prominently featured here. However, Cohen’s film seems blessed by the presence of Karen Black in one of her many kooky/charismatic mid-career supporting bits, and thanks to her, the finale is at least satisfying those searching for some kind of wonderful strangeness.

It’s Alive at the Nuart – The 40th Anniversary Screening:
This thirteen-minute bit features Larry Cohen at the Los Angeles Nuart Theater for a Q+A following a screening of the film for its fortieth anniversary in 2014.