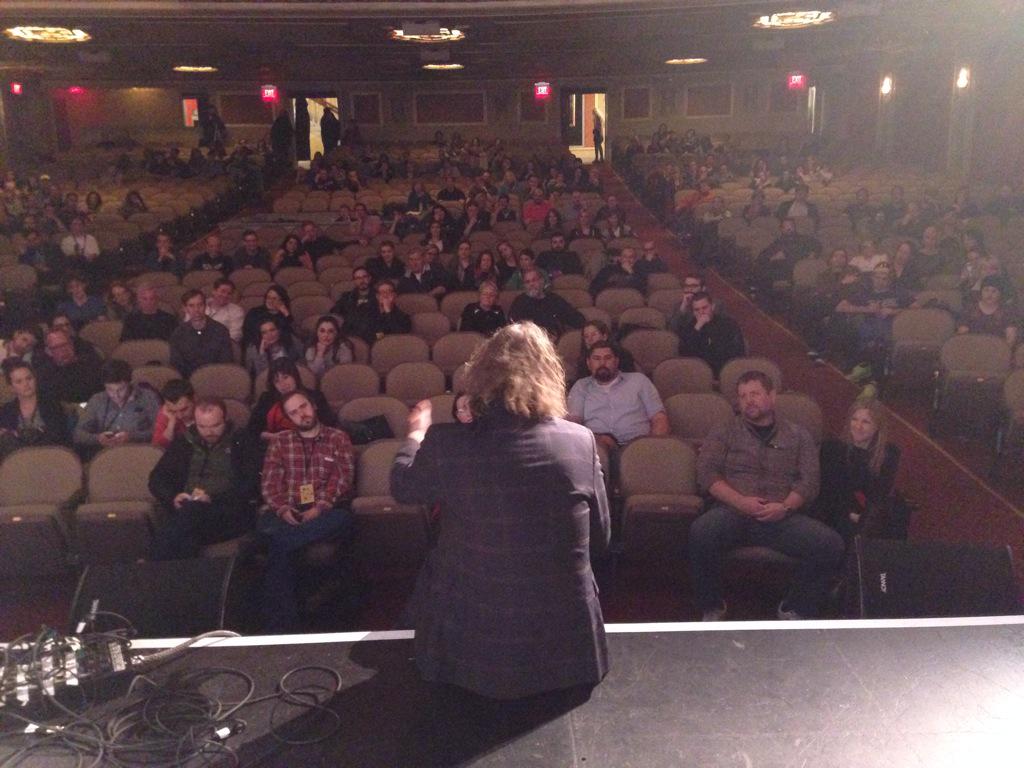 One of the joys of True/False, it turns out, is that nearly all of the post-screening Q&As are hosted not by programmers or associate programmers or awkward theater staff who’ve been left with a pair of mics and little context, but fellow filmmakers. Several of the screenings I’ve attended thus far were moderated by Jesse Moss, whose own exquisite film The Overnighters was part of last year’s lineup. Yesterday he moderated , amongst others, the Q&A with Brett Morgen, director of the deeply moving, humanizing portrait of the Nirvana frontman in Kurt Cobain: Montage of Heck, as witnessed above in the photo Moss himself took from the stage of the Missouri Theater (you can see me peeking out from behind someone on the end of the right hand side of the fifth row).

“While you were watching the movie, we were drinking,” Morgen confessed as he made the decision to sit on the edge of the stage, leaving Moss to make an attempt at moderating a session doomed to delve into serious introspection and lose focus along the way. Loose, mildly silly and deeply personal, this is the way all Q&As should be. The pair shared not only an obvious affection for one another’s creative output, but a rapport that fostered deeper conversation than your average post-screening conversation. The director hinted that after being told that the title Montage of Heck was too abstract and unfamiliar for a doc on Kurt Cobain, the titular Cobain mixtape that leaked onto the net and helped sway the studio to back his naming decision was in his sole possession, as far as he was aware. Who else could have leaked it with such perfect timing?

Earlier in the day, Moss also played host to the new film by the producers of The King of Kong, the first directorial collaboration of  Bryan Carberry and J. Clay Tweel, Finders Keepers. The doc details the bizarro case in which a man whose amputated leg ends up in the possession of a hill-billy dreamer of fame and fortune after it was found in a grill sold at auction. A horror show of familiar deceit, drug addiction and the uniquely American collusion of stardom, in fits and starts the film relies on its wonderful, occasionally oblivious characters to produce big belly laughs, carefully dropping deep seeded, complex ideas about entrepreneurship and personal regrets as the rather unbelievable story unfolds. Finders Keepers also attempts to comment on the idea of commercial exploitation, not only in the form of the monetary value of the leg itself, but in its somewhat naive characters who’ve been under the eye of the media since the original story broke. In this caveat, the story borders on indulging in its own criticism, some might say exploiting the ignorance or arrogance of the subjects for their own story.

I also caught another Neither/Nor screening in Grzegorz Królikiewicz’s 1973 film Through and Through, in which the fictionalization of a double murder is transposed through the lens of docudrama. With gorgeous, inventive black and white cinematography by Bogdan Dziworski, the film recalls Dreyer’s stark portraits of humanity while anticipating the rigorous framing of this past year’s Polish masterpiece, Ida. My favorite sequence involved the ringing of church bells, the main character bearing down on the ropes and riding them in a mad frenzy like something found on a children’s playground – pure sensory jubilance. Playing prior to this was a 1986 short appropriately titled Rat Catcher by the Polish filmmaker Andrzej Czarnecki, documenting the duplicitous process of exterminating rats from an industrial meat processing facility. Perfectly described by this year’s Neither/Nor critic curator Ela Bittencourt as a non-fiction body horror film, Rat Catcher follows the rats at ground level, observing their routines and the morbid mental games the exterminator plays with them to reach his ultimate goal of mass murder. Disturbing in its frankness about an exterminator’s job and oddly heady about it all, the short is in turn startlingly funny and stomach churning. 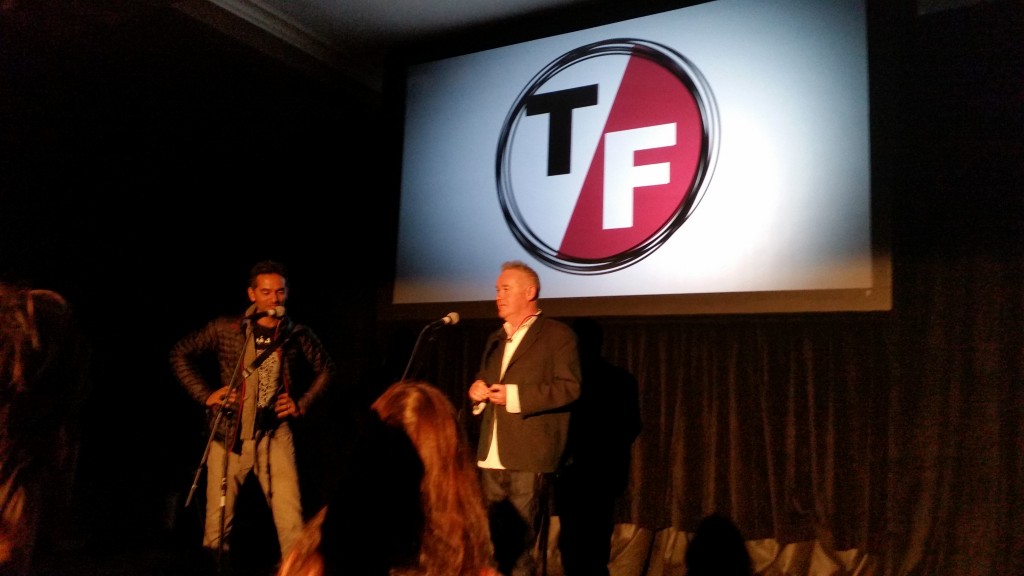 Before all of that, I began my day on 4 hours of sleep with a 4 hour film by the incisive British filmmaker Adam Curtis (see photo above). The theme at True/False this year is time, and no other film at the fest dealt with time so physically. With Curtis’s signature topical schizophrenia, Century of the Self  paints today’s personalized American PR machine as a product of Sigmund Freud’s under-acknowledged nephew, Edward Bernays, via the complex and ever evolving beliefs of human psychology. Despite the narrative sprawl, this is more thematically focused than many Curtis films, choosing just a few key figures and thoroughly unpacking the politics, personalities and personal implications with his uniquely effective voiceover to guide our way. Whether you can get on board with the man’s somewhat bracing style or not, the fact that his work is nothing less than brilliant can not be argued.

And with that, my second day at True/False comes to a close. If I can wake myself from the coma I’m about to fall into, there will be more coverage come tomorrow!