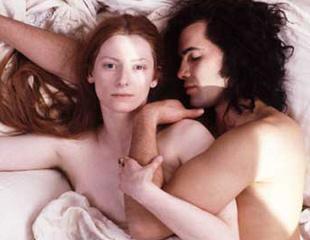 Don’t mean to sound harsh, but I haven’t much cared for anything that Sally Potter has had to offer since her 1992 Virginia Woolf gender-bender classic. If Tilda Swinton often gets called androgynous almost two decades later, it’s because of the attention that the eventual A-lister drew from this gutsy role, or I should call them roles. Before releasing what I imagine is a cleaned up, DVD extra filled Blu-ray edition of Orlando, Sony Pictures Classics will re-release the pic in the art-house circuit starting July 23rd in NYC and Los Angeles. I’ve liked what they’ve down with re-releases for Pedro Almodóvar’s films and Michelangelo Antonioni’s The Passenger — so this is on my must see for a 2nd time list.

The film is a story of a journey through time, of someone who lives four hundred years, first as a man, then as a woman. Orlando is granted favors by Queen Elizabeth 1, but after her death he falls in love with a visiting princess on the Thames river. The princess leaves him behind, which prompts him to fulfill his destiny as an Ambassador in the deserts of central Asia. There during war, he changes sex and returns to London to face whether he wants to marry and have heirs or lose everything. She finally meets the man of her dreams, but decides to lose love and inheritance to find herself.