Blast from the Vast: Patterson Impresses with Lo-Fi Sci-Fi 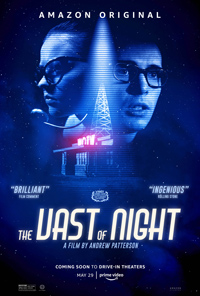 Occasionally, an innovative debut manages to come along which accomplishes a formidable mise en scene on a micro scale. Director Andrew Patterson, who graduates from commercials to feature filmmaking with The Vast of Night, manages to pull off a ruminative eeriness which eludes the genre’s vastly more expensive tentpoles with this lo-fi sci-fi narrative, an exercise which simultaneously channels the nostalgic technological yearning of the period it evokes. Although the film’s marketing may suggest something more substantial than what Patterson and scribes James Montague and Craig W. Sanger ultimately have to offer, it’s a promising debut from an exciting new cinematic talent.

The film begins with a framing device, suggesting it’s an episode of a television series called “Paradox Theater,” a clear nod to classic items like “The Twilight Zone” or “The Outer Limits.” In this broadcast, high-school student Fay (Sierra McCormick) finds herself being mentored by Everett (Jake Horowitz), a recent graduate of their school in Cayuga, N.M. of the late 1950s. As they collaborate on a new program idea whilst nearly the entire town attends a school basketball game, Fay begins her shift working as a switchboard operator. An eerie call about an object hovering in the sky precedes Fay intercepting a peculiar audio transmission, which she patches through to Everett, who broadcasts the unintelligible noises on his radio show, asking for listeners to call in if they can identify it. Two callers who reach Fay and Everett confirm these are alien transmissions, and such instances are usually are accompanied by a visitation.

Where The Vast of Night might be limited in visuals thanks to its budget, it more than makes up for these constraints as an auditory experience, and the film’s aural cues provide depth and texture to M.I. Litten-Menz’s cinematography, which every once in a while, is allowed an impressive roving tracking shot navigating the nighttime rural universe of Cayuga. But most of the time we’re stuck in close confines with Everett and Fay, and the performances of Jake Horowitz and Sierra McCormick provide the real backbone of the film. Their astute performances, which includes large swaths of dialogue, are rarely interrupted save for two memorable cases, including the film’s highpoint when a black man named Billy (voiced by Bruce Davis) calls into Everett’s radio station to relay his haunting story of governmental secrets and extraterrestrial communication.

It seems a pity The Vast of Night did not bother to go down more subversive existential routes as such a moment promises, which sets it apart from other memorable lo-fi sci-fi examples from the past decade, which includes such complex narratives as Coherence or Upstream Color (both 2013). Still, Patterson’s debut recalls early exercises and themes from the resumes of a Steven Spielberg or Christopher Nolan—and its pulpy framing device recalls the underrated The Sticky Fingers of Time (1997) from Hilary Brougher.