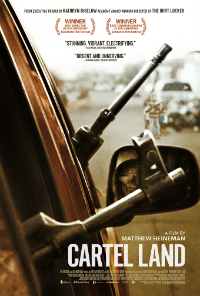 Towards the end of Matthew Heineman’s remarkable Cartel Land, which sees the filmmaker embedded deep within two fledgling anti-cartel independent militia groups – one in the southern Mexico region of Michoacán called the Autodefensas, the other dubbed the Arizona Border Recon, now patrolling Arizona’s Altar Valley – the once celebrated leader of the Mexican rebel group, Dr. Jose Mireles, steps from his secret asylum shirtless and haggard. Looking like the lost and lamenting Édgar Ramírez as the self styled revolutionary and terrorist at the end of Olivier Assayas’ Carlos, Mireles realizes he’s become just another casualty of Mexico’s deep seated corruption at the hands of a never ending cycle of cartel. As guards are let down and professional clumsiness sets in, Heineman’s characters are revealed to be as complex as the alarmingly multifarious situations unfolding on both sides of the border.

Much like Shaul Schwarz, whose own unflinching cartel doc Narco Cultura told a complimentary tale of cyclic systems of drugs and violence on the borders of Mexico, Heineman put his own neck on the line to shoot this story. Bedding down with those marked as the enemy of barbarous cartel is anything but safe and secure, yet he knew what was necessary to tell this treacherous narrative. As if in a militarized war zone, shots occasionally ring out, igniting a frenzy of on the ground action between what at first seems like good and evil, but as Tim “Nailer” Foley, head of the Arizona Border Recon, states early on, this is an imaginary dividing line, mercurial and deceptive.

Heineman’s film is an investigation into how much governmental apathy and oppression under the guise of cartels is too much. But most interestingly, as the brave souls willingly put themselves squarely within the cross hairs by rallying their communities and proclaiming themselves harbingers of truth, countless flaws are revealed not only within the corrupted legislative system, but within each man themselves. Monetary greed poisons the politics within Mexico (and beyond), but these individual leaders show themselves to be deeply fallible individuals, prone to disloyalty, self-aggrandizement and the same sort of primitive intimidation and violence as their supposed enemies. Toting machine guns around town like dictatorial thugs in the absence of the injured Mireles, the increasingly sketchy members of the Autodefensas police their territory on high alert without regard for anyone’s personal rights. Common folk are accosted, threatened, searched and beaten up for mere suspicion with no means of rebuke, and worse, the group is eventually subsidized by the Mexican government and integrated into the military police force as a sort of unregulated branch of law enforcement – a sort of new cartel outfitted with the best war ready equipment the military can supply.

The questions bubble to the murky, blood red surface – What exactly are these people fighting for again? Who’s side are they on? Is the government so corrupt that gangsters are literally assigned official titles, badges and guns? It’s a dazzlingly dark proposition, yet its all laid before the lens, plain as day, poetic as Poe. Cartel Land probes for moral fiber in a mass of rotten politics and finds itself grappling with a monster so stricken with malfeasance one can barely believe one’s eyes. As hard drugs are cooked before the camera by men dressed as officers of the law, one can only lose all hope for some sort of solution any time soon.