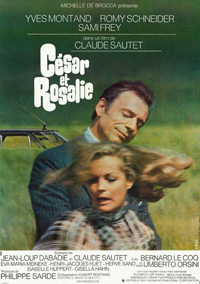 Out of the many representations of cinematic emotional complexities French filmmakers master over most is the messy actuality of that thing called love. Director Claude Sautet went on to make Cesar and Rosalie in 1972, his third consecutive film with star Romy Schneider (they would work on five films together, all told) and also his first union with frequent collaborator Yves Montand. An attempt to portray the complicated elusiveness of loving the one you’re with, at its core the film is about a love triangle, with a beautiful woman as the ever shifting apex. Its title is actually misleading, and could easily have been called Rosalie.

Rosalie (Schneider) is currently dating Cesar (Montand), a wealthy scrap metal dealer with significant business connections. As they get ready to attend a wedding, we get the sense he loves her more than she does him, though she admires his attentiveness and fatherly affection for her young daughter. But Rosalie was not expecting to see her ex-flame David (Sami Frey) at the event, a man with whom she’d been deeply in love until he disappeared without a trace five year prior. Immediately she finds herself rekindling the connection, much to the dismay of Cesar, whose possessiveness and jealous outbursts drive Rosalie away into David’s arms. But Cesar is persistent, and he tracks down the couple with great news—he’s bought Rosalie’s childhood home, something she’s always desired to own. Back she goes with Cesar, causing David to run away. But after some time, Cesar begins to feel Rosalie is more like a caged bird, and so he seeks out David, begging him to come stay with them a while. As the men become more and more chummy, Rosalie finds herself drifting away from both of them.

Though it wouldn’t win any major accolades (outside of a David di Donatello award, the Italian Oscar, for Best Foreign Actor Montand), and wasn’t treated to any significant film festival engagement, Cesar and Rosalie is a well performed relationship drama as often frustrating as it is enjoyable. Montand is quite moving as the blustering, privileged businessman, attractive to Rosalie for his ability to provide warmth and security. Somehow, that’s not quite enough whenever she manages to attain it, which explains her running into the arms of her younger, more artistic lover, played with brooding appeal by Sami Frey (of Godard’s Band of Outsiders, 1964). But history has already proven David to be undependable, often more emotionally invested in his impassioned profession as a graphic novelist. It seems Rosalie has a checkered predilection for these artistic types, as David isn’t the only ex-lover Cesar investigates whenever she disappears, which we’re led to believe isn’t infrequently.

Rosalie’s indecisiveness and selfishness may be frustrating—we’re not used to seeing female characters, especially ones as beautiful as these, given the agency to make such decisions. If the film’s ultimate ending seems unsatisfactory, Sautet still isn’t forcing her to choose. She’s drawn to both men for different reasons, and chances are, the finale is actually just the beginning of another episodic tryst. Perhaps it’s no surprise Sautet’s last pairing with Schneider, 1978’s A Simple Story (for which she won her second Cesar for Best Actress), deposits her into a similar scenario between Claude Brasseur and Bruno Cremer, a dramatic predicament common to several other Sautet films.

Cesar and Rosalie is also notable for being the first pairing of actress Isabelle Huppert with a bona fide auteur. Her role as Marite, a relative of Rosalie’s, was Huppert’s third feature credit, preceding smaller supporting roles she’d go on to play in films from Alain Robbe-Grillet and Bertrand Blier just prior to her career taking off in the late 70s.

Featuring another expressive, vibrant score from Philippe Sarde, opening the film with a beat promising the tone of a thriller, as well as Jean Boffety’s (The Things of Life; Je t’aime je t’aime) articulate framing (featuring plenty of handsome close-ups, particularly of Schneider in her custom made Yves Saint Laurent wardrobe), Cesar and Rosalie stays adamantly, wonderfully true to its complexities.