The Secret in Their Lies: Eastwood Explores Media Martyrdom in Shallow Expose 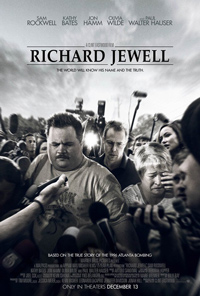 To be certain, Richard Jewell, the latest offering from Clint Eastwood in his five decades of directing, contains some of the best emotive characterizations since some of he early 2000s dramas, earning comparison on this front to something like Mystic River (2003) or even Letters from Iwo Jima (2006). And yet, his latest, which recuperates the dour ballad of the titular security guard unjustly accused of an act of terrorism at the 1996 Olympics in Atlanta, Georgia, bears all the lethargic hallmarks of the actor/director’s late period offerings—trite melodrama, preachy grandstanding and superficial, skewed countenance of collective, generally perceived American identities or institutions.

What was once to be titled The Ballad of Richard Jewell speaks to the initially meaty case study of what happened to Jewell, a portly social outcast who worshipped the role of law enforcement so zealously he checked off all the boxes assigned to a homegrown terrorist. As played by Paul Walter Hauser, who for once isn’t assigned the role of goofy comic relief, brings empathy and gravitas to his performance of the misunderstood figure of Jewell, but Eastwood and scribe Billy Ray brush anything untoward or unseemly under the rug (that is to say, the arguable dysfunction of his situation is downplayed in order to highlight the gross portraits painted by the media).

Hauser is matched by the always sublime Kathy Bates as his loving mother, and Sam Rockwell provides solid support as his rebellious lawyer. The farther out the characters are in relation to Jewell, however, the more cartoonish they become. Olivia Wilde is the viper reporter who uses her sex appeal for scoops—as much as this portrayal rubs people the wrong way, it’s visibility allows for a welcome conversation piece since her Kathy Scruggs is as much of a selfish monster as the Kirk Douglas character in Billy Wilder’s classic Ace in the Hole (1951).

Jon Hamm is forced into broader terrain as an aging lothario in a characterization paralleling his astronaut in Lucy in the Sky, while Nina Arianda dusts off the Russian shtick which made her so likeable in Rob the Mob (2014). Shoddily edited and obtusely examining the complex problems which allow politics, terrorism and the media to drive false or exaggerated perceptions of reality, the real horror Eastwood’s film is ruminating upon is the discomfort felt when white men are treated like their non-white counterparts.

If we can take a step back, Richard Jewell is contemplating the same horror as what befell the young drug dealer in Yann Demange’s White Boy Rick (2018), wherein white men are treated like the invisible black men who are railroaded by law enforcement (and every other American institution on the daily). It’s these ‘kinds’ of men who are supposedly worthy of their own films because it’s their stories which exemplify how broken our cultural acumen is on these subjects and how warped our justice system really is—because how could this happen to men like them?