Into the Woods: A Creature Was Lurking in Heller’s Rudimentary Sophomore Film 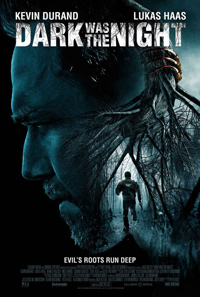 If it’s nifty poetic title manages to reel you in, you’ll discover a much less memorable narrative at play in Jack Heller’s sophomore effort, Dark Was the Night (if the title sounds familiar, you may be thinking of the 2013 indie Cold Was the Night with Bryan Cranston or the gospel blues song by Blind Willie Johnson). A creature feature filled with familiar scary techniques melded to tangential familial stressors, Tyler Hisel’s screenplay (a writer making a jump from found footage to traditional thriller narratives following the South African flick Safari, 2013) feels rather primitively conceived. A mysterious, mythical beast is unleashed in the woods while the rural townsfolk become terrified as animals disappear and the body count mounts, and the unloved outsider sheriff must contend with stopping the creature from decimating a community that could care less for him and his family.

When a logging company displaces a malevolent, mysterious creature in the middle of the woods, a nearby town begins to bear the brunt of its wrath. Sheriff Paul Shields (Kevin Durand) and his deputy Donny Saunders (Lukas Haas) begin to investigate the alarming animal prints showing up all around town. Experts say it’s impossible for a bipedal creature of such size to exist. Attempting to find out if it’s a prank or not, the disappearance of the local animal wildlife is another cause for alarm. Townsfolk begin to grumble about an ancient evil in the woods, mistrustful of the Sheriff, an outsider dealing with the recent loss of one of his sons, which has caused him to separate with his wife. Soon, corpses of humans begin to be discovered, and the creature strikes closer to home.

At the very least, Dark Was the Night gives several notable character actors the chance to take leading roles, particularly the often very sinister Kevin Durand, who makes for a sympathetic figure here. Grown up child star Lukas Haas appears as his naive deputy, while Nick Damici (star of several Jim Mickle titles as well as the recent werewolf flick Late Phases) continues his presence as an indie genre staple, albeit with less to do in Dark Was the Night than we’re accustomed to, basically portraying the racial other who explains the Native American mythos surrounding the creature’s origins. This ends up being another version of something explored in Larry Fessenden’s superior 2001 flick, Wendigo, which starred Patricia Clarkson. Score, sound design, and Mickle’s regular DoP Ryan Samul come together to make the film’s ambience effective, but the expected progression and eventual showdown in a church basement never induce any tension.

Generally, Dark Was the Night seems to have the opposite effect, and all the focus on Durand’s deceased son only succeeds in stopping the film’s momentum, especially with a crumby role for the generally irritating ex-wife character played by Bianca Kajlich. You’ve most likely seen much worse, and the creature’s eventual reveal looks impressive, even if it’s basically designed from any number of other nameless generic entities. Dark was the night…cold was the film.