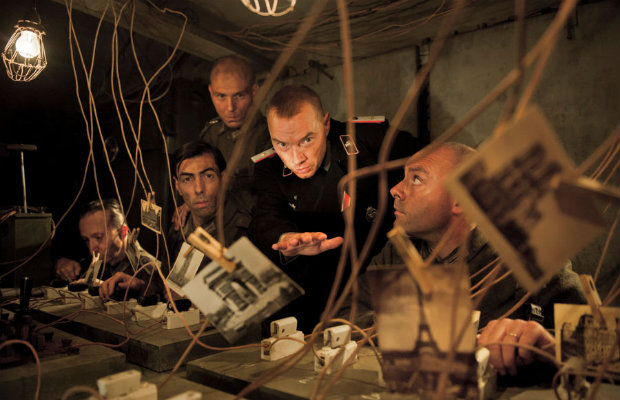 Paris is Burning: Schlondorff Continues Plumbing the Depths of WWII 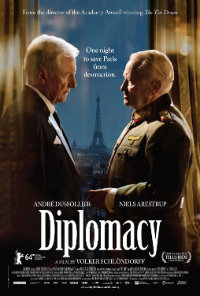 Playwright Cyril Gely (who also wrote the play upon which Safy Nebbou’s 2010 film Dumas was based), adapts his own play, Diplomacy for Volker Schlondorff. Though the film isn’t far removed from its roots as a stage play, Schlondorff gets its energy from the performances of two French cinematic alums, often settling for the single chamber setting of their deliberation, infrequently stepping into the ravaged outdoors to show us the scuffling, frantic, wartorn desperation going on within the streets of Paris on the eve of liberation during WWII.

Volker Schlondorff, a titan that hails from the New German Wave, has been steadily working since then, though his recent works are often overlooked or ignored, still wallowing in the shadows of masterworks like The Tin Drum or The Lost Honor of Katharine Blum. Contemporaries like Wim Wenders, Werner Herzog or ex-wife and colloborater Margarethe Von Trotta have either attained greater international renown outside of German cinema or face less distribution woes (Schlondorff’s last film, 2011’s Calm at Sea never reached the US). But often, not unlike Angieszka Holland, Schlondorff seems grimly focused on facets of World War II (in the past ten years, three of his five features have been set there, including this, Sea, and 2004’s The Ninth Day).

Compared to the grim horrors of The Ninth Day, which is based on the prison diary of a Catholic priest in Dachau, Diplomacy is a cake walk of conversation. Andre Dussollier walks the tight rope as a Swedish consul doing his very best to convince a Nazi commander not to follow through with Hitler’s petty orders to destroy Paris. How can the beautiful city still stand so resolutely while Berlin and Hamburg lies in tatters? We’ve already been privy to a private conversation among his peers, wherein the General has already voiced his derision for doggedly following orders that have resulted in the extermination of the Jews and now the pointless destruction of a city. Yet, there’s duty and honor and all that.

So Dussollier’s groveling is not without a bit of irony—too bad these types of debates either went unheeded or never even transpired when people were being rounded up. But slowly but surely, he gets under the general’s skin, offers an olive branch by committing to save the General’s family from Nazi reltaliation by using the same contact that ushered his Jewish wife to safety in Switzerland. Dussollier’s Nordling is allowed to become more human as this transaction transpires, though the same can’t exactly be said for Niels Arestrup,  an excellent casting choice, as he’s performer that excels in wickedness and villainy. Though it tends to be a rather dusty historical drama, Diplomacy isn’t without significant merits, a drama depicting the type of barely contained desperation behind what could have been a significant catastrophe.