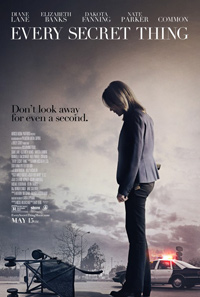 Treated to a chilly reception following its premiere at the 2014 Tribeca Film Festival last spring, the feature debut of documentarian Amy Berg will see a theatrical release amidst the encroaching fanfare of her next highly provocative doc concerning teen sex rings in Hollywood, An Open Secret, hitting theaters only a few weeks later. The timing is certainly convenient for Every Secret Thing, perhaps a move to overshadow the critiques of her latest, as Berg seems noticeably less comfortable in the realm of narrative storytelling, especially if you’ve seen her hailed work on Deliver Us From Evil and West Memphis Three, now part of a growing body of work haunted by the specter of sexual transgressions involving preadolescents. This latest is based on a novel by Laura Lippman, a mystery writer who began as a journalist, which seems an inspired parallel to Berg’s career in film. The odd man out is director Nicole Holofcener, known for her distinct aesthetic in indie films generally revolving around strong female protagonists in their everyday lives, here adapting the novel for the screen. The source material is compelling, and yeah, there are a couple unsettling secrets that get revealed, but the unfolding narrative reveals this psychological study to be less mysterious than it is robustly disconsolate.

Helen Manning (Diane Lane) seems to be an overindulgent single mother to her young daughter Alice (Brynne Norquist). The behavior seems to be born out of guilt since Helen obviously prefers to dote on Ronnie (Eva Grace Kellner), a neighbor girl who comes from a less prosperous family. Packing them off to a birthday party, the girls, who don’t seem to care for each other, are involved in an embarrassing incident at the party and sent home. For reasons unexplained, the duo abduct a female black infant and eventually kill her. Locked up for the rest of their adolescence, the girls are released seven years later, and Alice (now Danielle Macdonald) and Ronnie (now Dakota Fanning) suddenly find themselves at the center of another scandal when a three year old biracial child is abducted. The cop that discovered the body of the first kid, Nancy Porter (Elizabeth Banks), was promoted to detective, and now heads up the new case.

A clunky, mismanaged entry into the material doesn’t help matters, and it’s disappointing to see Berg and Holofcener lead us by the nose through a montage of newspaper clippings to bring us up to date. Events and information get jumbled up a bit, as we’re treated to a healthy dose of flashbacks via separate character’s memories from past events that obviously have something to do with this new child abduction. Sometimes, this feels innovative, at least in how Berg sometimes manages to convey how memories unspool. More often, though, it seems like these excursions are simply meant to distract us from the obvious.

Every Secret Thing suffers the most in its child performances, with Brynne Norquist and Eva Grace Kellner’s heavy-handed dialogue sounding like something we’d expect from a Lifetime production. Likewise, even the beautiful Diane Lane has a few moments of pointed moments equally diverting. Many will most likely find Elizabeth Banks to be an odd choice as the lead detective of investigation, but for the most part, her performance is solid, and it’s less of a clichéd dramatic suit for the actress, at least compared to her adulterous housewife in Little Accidents. As the troubled, grown young women, Fanning and relative newcomer Danielle Macdonald are the most fascinating, and we manage to develop a bit of empathy for them.

The choking rural façade is filmed in a palette that seems either faded or grimy by DoP Rob Hardy, from the washed out offices of the detective’s to Ronny’s white-trash family, and even through the homes of the middle class citizens, an omnipresent fade seems to lord over everything in Every Secret Thing. Though its mystery might seem too simple, what Berg and Holofcener do play around with a little more subtlety is the interplay of class and race amongst its group of characters.

Note the differences with how Bank’s character initially interacts with Lane, another white woman, versus several other black females. Or, more noticeably, the heated interplay between Nate Parker’s detective and the boyfriend of the missing girl’s mother played by Common. Notions of race and the interracial are playing out in complicated dance between all the dramatic seriousness of Every Secret Thing, something that’s often more fascinating than the two sad young women caught up in a seemingly never ending cycle of despair.

Reviewed on May 08, 2015 via a Film Independent screening w/Elvis Mitchell moderating a Q+A with director Amy Berg.