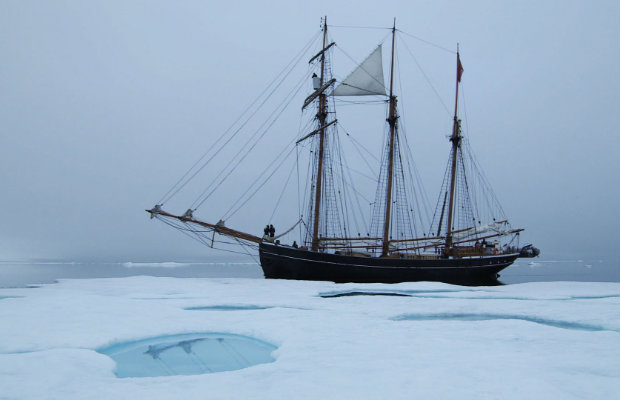 Dencik Sails For Science and Existentialism 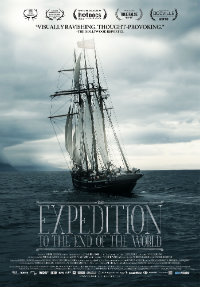 At first glance, Danish director Daniel Dencik’s Expedition to the End of the World seems a blatant ripoff of Werner Herzog’s graceful examination of modern Antarctica in Encounters at the End of the World, sharing not only terms in titles, but the idea of venturing off into the frozen unknown to uncover more about human nature than the wild they seek to explore. Fortunately from there, concepts part ways in nearly every imaginable way.

Dencik’s adventure is staged aboard a vintage wooden schooner set to brave a labyrinth of flowing ice just off the unexplored coast of Northeastern Greenland. As a multifarious group of scientists, artists, anthropologists, biologists, geographers and philosophers, the crew sets out to traverse the unknown before the fjords freeze once more. Through the brilliance of human intellect and the ridiculousness of its arrogance, their treacherous voyage renders humanity just an inconsequential, though miraculous, blip in the infinite arc of time.

It should not surprise that when faced frankly with the dark, cold realities of nature, the civilized inherently start to question their own place in the chaos of the world. Out in the wilderness of Greenland, it seems to be the central notion at play, coming up in conversation more often than not. With the luminous glacial landscape setting the stage, discussions often drift to the concept of human impact on the world, but unlike any modern ice bound doc that comes to mind, scientists and artists alike cheekily agree that though we face the rise of global temperatures and the melting of our polar caps, it is not world ending. Not only that, but they see it as egotistical to think that its solely mankind’s fault for such a change and our implicit duty to find a solution. The artist puts it bluntly, saying that we are just ‘clinging nostalgically to our state of life’ as it currently is, resistant to change. To them, it is just the natural ebb and flow of nature, and being creatures of adaptation, humans will adjust and continue on until extinction puts us all out of our misery.

Such deep, heady discussion comes from the blending of different social strata aboard a foreign vessel in alien territory. Taking the classic formula of ‘let’s see what happens’ reality TV and spicing it up with intellect and adventure, Dencik had dozens of crew members to choose from and no specific plan. Those chosen as his characters exude distinct personality traits suitable for Shakespearian tragedy, each played almost as caricatures of their profession.

The film, more than all else, uses them to depict the absurdity of our perceived human advancement. There is incredible intelligence amongst the crew members, but when we witness them looking for tiny pebbles that might suggest the habitat of ancient humanoid ancestors, or see them watching helplessly as their makeshift storage building is utterly destroyed by a polar bear, their efforts to progress our knowledge of the world we live in just seems plain pathetic and pointless. This, paired with the fact that plenty of time is wasted on boredom induced entertainment – shooting guns, flying rafts, blasting speed metal – makes for some hysterically provocative moments of strangely intellectual epiphany.

Though Dencik’s follow-up to the stylized 8mm Moon Rider tends to present humanity as slight in the face of vast wilderness, he also gives credence to the crew’s blind perseverance and continued assurance that adaptation is inevitable. Climate change is extinguishing life as you read this, yet hope and beauty remain thanks to human acumen which deems it so. After all, without people, the awe-inspiring landscapes captured throughout the film would be nothing but over-sized hunks of earth being drowned by the rising waterways. It is us that regard nature as something of beauty and no other living being on Earth refracts and reflects that beauty through the creation of art.

With Expedition to the End of the World, we are reminded of our insignificance while celebrating the miracle of our intelligence, all through the same comedic discourse that’s echoed back from the ravishing frozen landscapes as a linger question – why us?