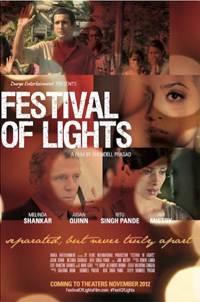 Previously working as a documentary filmmaker, director Shundell Prasad makes her fiction feature debut with Festival of Lights. Here she explores issues of identity and immigration with a family fleeing 1970s Guyana for a better life in the United States. However, despite the population she highlights, mostly unseen or unheard in mainstream Western cinema, the end product is a contrived soap opera of cliché and predictability. Top that off with an extremely grating, off-putting lead performance, a weak screenplay and a rather uninspired look, and you have what feels like a film school conversation piece inspired by innately better material, which something like Mira Nair’s similar 1991 film, Mississippi Masala (yes, different region and immigration experience explored) simply blows out of the water in comparison.

Beginning during a period of political turmoil, we are introduced to Vishnu (Jimi Mistry) and Meena (Ritu Singh Pande), celebrating Diwali, the Hindi holiday of the festival of lights, with their three year old daughter, Reshma. One night, they overhear a horrific break in at their neighbors, where the females of the household are raped. Desperate to leave the country and join relatives in the US, they apply for asylum, but since Vishnu neglected to put pertinent information on his application, he is denied passage while his wife and daughter are allowed to leave. Unfortunately, Vishnu never gets to reunite with his wife and daughter due to mysterious circumstances.

At first miserable, cooped up with overbearing relatives, Meena takes a job as a cleaning woman, but is wooed by her wealthy employer, Adem (Aidan Quinn). Moving ahead 15 years, now in the 1980’s, the eighteen year old Reshma (Melinda Shankar) has grown into unruly, rebellious teen, unhappy with her mother’s marriage and desperate to be reunited with her father. Due to the escalating dramatic run-ins with her mother, Reshma is kicked out and forced to live with some friends of the family that have mysterious ties to her absent father. Just when Reshma is about to get her life on track with an impending marriage, she discovers why it is her father has never joined them, and thus begins a journey back home to her native Guyana.

Prasad certainly has a lot of personal investment in this film project (a Guyana native herself), which deals with the difficulties of being uprooted from one’s homeland only to struggle with other complicated issues as strangers in a strange land. But despite having some well known cast members at her disposal (Mistry, Quinn), the majority of the film, rests on the shoulders of Shankar, who must have attended the Kristen Stewart school of face pout acting. Prasad curiously neglects to build any empathy towards Reshma, who comes off as a spoiled, ignorant teenager, purposefully failing her classes, but apparently a genius at test taking. How convenient. Shankar is so leaden, that, upon breaking away from her mother, single-handedly sinks this abysmal film as if it had been thrown overboard with an anchor.

Newcomer Ritu Singh Pande manages to be an intriguing screen presence in her first role, but there are so many laughably unbelievable moments (Reshma has a breakdown in what has to be one of the most unrealistic hospital sequences committed to film, even if it set playing by 1980s standards) and predictable clichés, all funneled back to its titular motif, that clunky, grievously referenced light festival, that one has a hard time believing this was meant to be taken seriously. Take for instance, Reshma’s school friend, who actually says aloud, “Here people look at you like you’re mad for putting lights around your house.” We get it. On a journey to discover herself and her heritage, Reshma reveals herself to be not only ungrateful to her mother, but carelessly selfish and spoiled with every choice she makes to propel the narrative forward. So we’re left with another American tale, after all.