When Less is More: Wan’s Sequel Does 2 Much 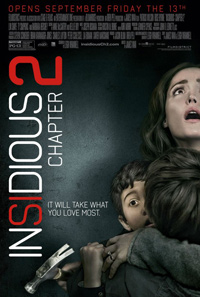 A follow-up to 2010’s highly entertaining old-school horror throwback Insidious seemed a tall order, yet James Wan makes a valiant attempt at bringing us a second chapter to the plight of the Lamberts, with original cast in tow. Unfortunately, Insidious: Chapter Two submits to the tired trappings of sequelitis, attempting to fill in too many holes, relate too many backstories, and remind us of too many references to the first film to properly focus on delivering the same caliber of effective scares as its predecessor. Try as they might (which is where the biggest problem lies, as nearly every aspect of the film feels like it’s trying too hard), that final, chilling gasp that echoed into the original credits cannot be recaptured; left instead are the comedic quirky flourishes to further us along.

We revisit the traumatized Lambert clan shortly after the dramatic events that ended the first film, where medium Elise Rainier (Lin Shaye) has been murdered and an evil spirit that haunted Josh (Patrick Wilson), may have latched itself onto him when he entered the Further, a zone where spirits in limbo reside. As police investigate whether or not Josh had something to do with the murder, Renai (Rose Byrne) takes the family to stay with Josh’s mother, Lorraine (Barbara Hershey). Within hours, it’s evident that the spirit world is not through with the Lambert’s, as Lorraine begins to see a wispy female ghost pacing her halls at night. And there’s something very peculiar going on with Josh. A flashback to 1986, when Elise and another medium, Carl, first fixed Josh’s childhood problem, sets up Lorraine’s resolve to return to Elise’s assistants, Specs (Leigh Whannell) and Tucker (Angus Sampson). For the first time since then, Lorraine also reaches out to Carl (Steve Coulter) for assistance. Realizing that whatever killed Elise inhabits Josh’s body, the four of them begin an investigation into the background of the malignant spirit. Meanwhile, Renai begins to be terrorized by not only the nefarious female spirit Lorraine spotted in the house, but by her increasingly violent and aggressive husband.

While a quick synopsis would seem to indicate a straightforward scenario, Wan and his screenwriter, Leigh Whannell, lose their thread of intensity in a quagmire of overly dramatic backstory. As the plot branches off into its divergent scenarios, any menace established in its opening sequences (due almost entirely to Patrick Wilson’s creepy demeanor) dissipates once Hershey and crew go off on a wild goose chase where we learn way too much about the spirit that’s terrorized Josh since childhood. The more we know, the less terrorizing this insidious spirit becomes, to the point where we even begin to psychologize the life and mind frame of this overly complicated specter. In fact, events become downright silly when their investigation leads them to an abandoned hospital where Lorraine used to work…with all the old confidential patient records conveniently accessible.

That early 1986 flashback sequence is also problematic, as the actress playing the young Elise, Lindsay Seim, has been voiced over by Lin Shaye, which is obvious and distracting. Poor Rose Byrne is written to be even more useless this time around. Ludicrously, her teleporting eldest son induces himself into a comatose sleep whilst his possessed dad tries to tear into a locked cellar a la The Shining, just one more rushed detail into a stilted climax that leaves open the possibility of another chapter.

To its credit, Insidious: Chapter 2 is on par with the first film on a technical level. A carefully layered sound design, Wan’s use of creepy music and a score by Joseph Bishara try to lay the ground work, converging with the returning John R. Leonetti’s as cinematographer to make you wish you were being spooked, but the comic duo of Whannell and Sampson are left to steal the show.

Like many sequels that take off directly where the original film left off (the original Halloween II or Rec 2), there seems to be a need to explain and fill in all the details, which usually kills what was so scary in the first place—that which is unknown. Wan does something potentially interesting with the events of Chapter 2 that directly references some of the terrifying moments of the first film. But even as these flourishes expand the narrative potentials, they likewise reinvent our perception of the menace of the original. Perhaps there is hope for a next chapter now that the backstory of the original, insidious spirit has been divulged, and the focus can return to new territories with more mysterious, revitalized vigor.