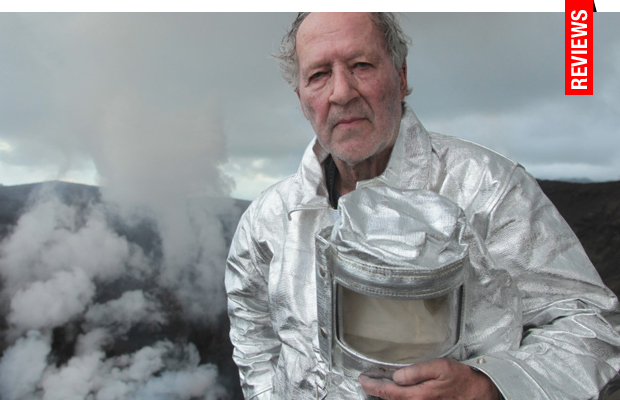 Herzog And The Goblets of Fire: Following In The Volcanic Footsteps Of Katia and Maurice Krafft 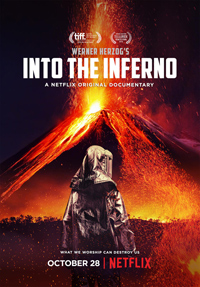 Who could have imagined more fitting new subject matter for Werner Herzog to engage with than Earth’s raging fiery orifices: volcanos. And with Herzog recently speaking publicly about his desire to play a Bond villain, what better inspiration? After having met renowned volcanologist Clive Oppenheimer on the shoot of the Antarctica set Encounters at the End of the World over a decade ago while studying Mt. Erebus, the pair have travelled the world in search of volcanos, and almost more importantly, the alluring beliefs that humans have developed while living within a stone’s throw of the lava flow. Unsurprisingly, Into The Inferno turns out to be less about the science behind volcanology than about the infinite philosophical inquiries that have ruptured from the souls of those who live in close proximity to them. The result? Existential crises entertainingly rendered in the shadow of stunning footage of molten lava, ash, and that signature Bavarian voiceover only Herzog could deliver.

There’s a rich history of this sort of output from Werner, in which humanity’s helplessness, anxieties and superstitions are wrenched forth by the extremity of nature’s immensity and effortless apathy toward the human race’s technological advances. Just a quick look at the ol’ filmography lists not only Encounters, but Grizzly Man, Cave of the Forgotten Dreams, Happy People: A Year in the Taiga, The White Diamond, Lessons of Darkness, Fata Morgana…and those are just the docs. The man’s hunger to experience all of Earth’s ferocity first hand and render it in incomparable cinematic forms is immensely respectable if nothing else, and yet the films make up one of the most unique and impressive bodies of work in the history of cinema.

In Herzog’s latest, he employs a traveling grab bag structure that’s quite similar to his recent tech survey Lo and Behold, in which we fly from one topic (and volcano in this case) to another without really getting to know the parties in question. This tactic takes us on sojourn to the netherworld of North Korea for a rare peak at Mount Paektu and the mythological propaganda that’s been built around it; to Vanuatu, where the natives worship an American soldier named John Frum, who they believe will return one day with Western goods for the believers; to Ethiopia, where we meet a wildly passionate paleoanthropologist named Tim D. White who sifts through the desert for ancient remains; and back in time to revisit the astonishing up close and personal lava flow footage shot by French volcanologists Katia and Maurice Krafft, whom eventually were swallowed, much like Grizzly Man’s Timothy Treadwell, by one of Mount Unzen’s lethal lava flows while filming the breathtaking eruptions.

Herzog and Oppenheimer risk their own lives, wrapped in metallic body suits while standing at the rim of a lava spewing volcano just to bask in its heat and beauty, intimately. While their footage is remarkable in its wild grandiosity while backed by an operatic score, the conversations they’ve captured often emit a whiff of Herzog’s friend and fellow filmmaker Errol Morris and his penchant for interior self delusion. Werner has always been interested in the psychology that erupts from the human mind in the face of nature’s extremes, but here his inquiries often feel shallower and mildly exploitational in comparison to his previous works, especially when working the non-scientifically minded for oddball beliefs that lead only further down the volcano. Into The Inferno thus ranks amongst the middle ground of Herzog’s non-fictional work, but on the grand scale that this filmmaker continuously works on, it still stands as a mighty solid slice of existentially wrangled cinema.