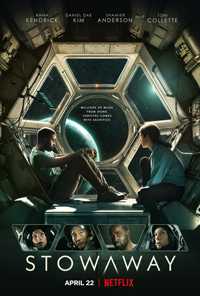 “In space, no one can hear you scream,” a foreboding tagline of another sci-fi classic once cautioned. But conserving the oxygen necessary to breathe, much less scream, is the anxiety inducing thrust of Stowaway, the sophomore film from Brazilian filmmaker Joe Penna. A US/German co-production sporting expert tech feats and narrative beats earning comparison to Cuaron’s Gravity (2013), Penna and regular co-scribe Ryan Morrison move from the chilly environs of their last endeavor, Arctic (2018) to unprecedented perils in the heavens.

Although we’re used to a different kind of vibe suggested by plots involving humans interacting with ‘unwanted guests’ aboard their spacecrafts, Penna concocts a ferocious moral dilemma created by a formidable mixture of human folly and questionable conservation of resources.

The Hyperion, so named for one of the twelve Titans of Greek mythology, those children of Gaia and Uranus (Earth and Heaven), who would overthrow their parents, is a troubled expedition at the outset. Engines aren’t performing as they should, allowing for a shaky start after commander Marina Barnett (Toni Collette) nearly aborts the mission. Her crew consists of research officer David Kim (Daniel Dae Kim) and medical officer Zoe Levenson (Anna Kendrick), and the three colleagues enjoy one another’s company, each making statements about why they originally applied for the HARP mission. Twelve hours into their journey, (which aims to research the ability for long term, sustainable life on Mars and take two years to complete), while inspecting a CDRA (Carbon Dioxide Removal Assembly), Marina discovers an unconscious man tangled up in the machinery. Once revived, the crew learns he is Michael Adams (Shamier Anderson), a launch support engineer who only remembers assisting the preparation of the ship for takeoff. Unable to turn back, Michael must undergo the journey. The only trouble is, the CDRA is irreparably damaged. As it turns out, the Hyperion was technically a vessel outfitted for two, and the three-person crew is already stretching the oxygen level thin. With the destruction of the CDRA, Daniel is forced to scuttle his algae samples to assist in generating enough oxygen for them to make it to Mars (which also renders the mission a failure). But eventually, they’re faced with the impossible scenario—expel Michael or they will all perish.

What Penna and Morrison execute so brilliantly in Stowaway is the emotional, human component generated in such a situation. In essence, this is a war-time survival scenario, and the reactions of Marina’s crew is informed by their skillset. Analytically, David and Marina understand the necessity of disposing of Michael while Zoe is faced with a stronger crisis of conscience—Michael has been humanized. It’s not so simple as pushing him out the airlock or assisting his suicide.

The resulting anguish is palpable, and as David and Zoe scramble to find a solution, the resulting ripple effects generate their own set of tragic results. Penna’s quartet is phenomenal. Colette, Kim, and Anderson (who stole the best scene in the recently released City of Lies) each have their moments, but it’s Anna Kendrick who really surprises. Having crafted a filmography of smart, plucky, resourceful (and often smug) characterizations, her performance as Zoe proves to be her shining hour. Mournful, resilient, and humane, she expertly navigates Penna’s harrowingly transportive scenario.

Lensed by Klemens Becker, the space sequences (which, yes, do feature those familiar scenarios we’ve seen in many films of similar ilk) are impressive, while the internal sequences feel increasingly claustrophobic. Although it lends itself to obvious metaphorical allusions, a conversation on jazz titans like Charlie “Bird” Parker, Pharaoh Sanders, and John Coltrane between David and Michael astutely sums up the power of Stowaway, a film which is ‘not so obvious’ and derives its power from ‘pure expression.’